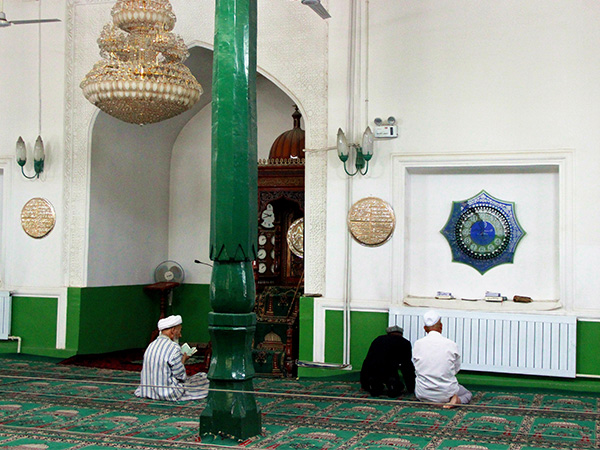 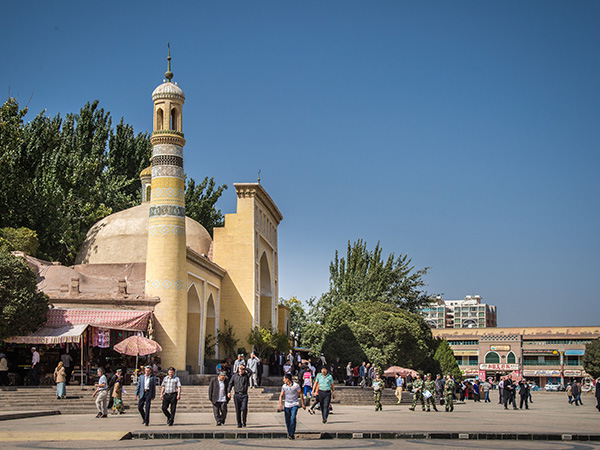 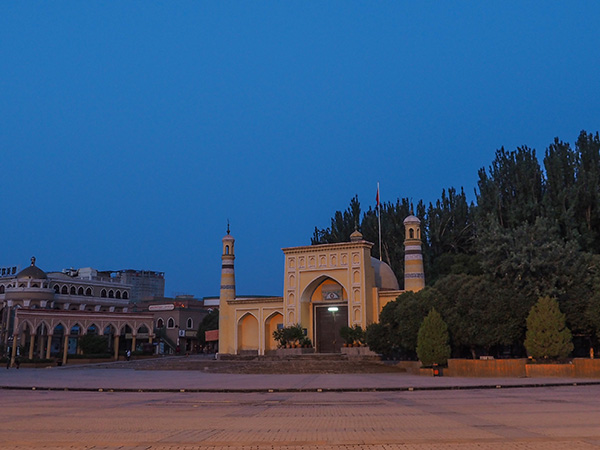 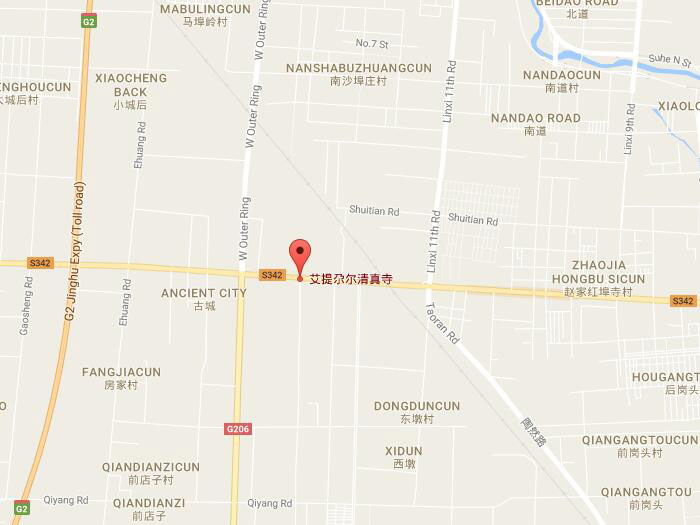 The largest mosque in Xinjiang Province.

The Id Kah Mosque （Chinese name: 艾提尕尔清真寺） is the largest mosque in China. The mosque was built by Saqsiz Mirza in 1442 (although it incorporated older structures dating back to 996) and covers 16,800 square meters. At midday on Fridays around 10,000 people will gather to pray and study the Koran, and prayer 5 times/day on other days. You'll be asked to remove your shoes before entering the Main Hall of the Id Kah Mosque, which has traditional Islamic pillars, carvings and rugs strewn over the floors. Women are advised to cover upper arms and legs. A scarf is not compulsory, but is seen as a mark of respect。

It is a special building in Chinese architectural culture. The gate of the mosque, built of yellow bricks with the joints of the brick work, has distinct lines. On both side of the gate are eighteen-meter high round brick columns half embedded in the wall. On the top of the columns stands a tower where the imam would call out loudly at dawn every day to wake up the Muslims and summon them to attend service in the mosque.
As the center of religious activity in Kashgar, the area is typically full of pilgrims who have come to worship at the mosque. Sometimes, these pilgrims have religious activities right outside the temple, where they whip themselves into a frenzied dance accompanied by musicians playing from balconies of the Id Kah Mosque.

Many old Urughur style buildings also stand around the Id Kah Mosque. When people stroll around in these streets, all kinds of local handicrafts can be found the professions are coppersmiths, blacksmiths, carpenters, jewelers and cobblers, also you can find a street of hand made embroidered cap and wool made carpets, all kinds of local foods, fruits etc.

Here were the cemetery of Muslim islamic missionaries left by Arab general Qutayba ibn Muslim who conquered central Asian originally. Ming dynasty Zhengtong period (1436 ~ 1449), the rulers of Kashgar Shaq Serz · Mirza buried here, later his descendants built a small mosque, that is the predecessor of the Id Kah Mosque.
【Built in the early time】
In 1442 AD, king of Kashgar Shaq Serz · Mirza established a mosque in here first, when Kashgar was ruled by East Caqadai Khanate Sayyid Ali of Dughlat Family reign period (1435-1457). The mosque is located at a reed beach outside the city, the eldest son of Sayyid Ali, Sanice Mirza built small mosque here first inside the temple site now first.

1. On August 9th, 1993, the Chinese Muslim General Ma Zhancang killed and beheaded the Uighur leader Timur Beg, displaying his head on a spike at Id Kah mosque.
2. In March 1934, it was reported that the Uighur emir Abdullah Bughra was also beheaded, the head being displayed at Id Kah mosque.
3. In April 1934, the Chinese Muslim general Ma Zhongying gave a speech at Id Kah Mosque in Kashgar, telling the Uighurs to be loyal to the Republic of China Kuomintang government at Nanjing.
4. On 30th July 2014, the imam of the mosque, hotelier Jume Tahir, was stabbed to death shortly after attending morning prayers.

Id Kah Mosque gate tower is in the front of the Id Kah Square, sky blue temple gate is 4.3 meters wide, 4.7 meters high, on each side of the door there is connected short wall; Outside there is 12.5 meters brick column on both sides. To the top there is a tower (bunker building, which is for mosque staff summoned Muslim to attend religious service).

Enter the mosque gate is an octagonal hall, there is a 20 mu big garden, on both sides of north and south there is a row of 18 scripture halls, which are the place for Imam to sermon and for religious students to study scripture. It has two pools, surrounded by towering poplar, although it is in the city center, the inside of mosque is quiet.
Prayer Hall is in the west end of the mosque, separated by a big yard with grid wall. Prayer Hall is divided into 3 parts of inside, outside and the entrance, all are more than a meter above the stylobate; The total length from north to south is 140 meters long, 19 meters deep. So width of large prayer hall, "not only are not included in domestic, is also rare in the world." (The Chinese Islamic Architecture, page 164). Outside the mosque there are 140 green carved patterns stakes up to seven meters, supporting the white ribbed ceiling.

【Gate】
Id Kah Mosque Gate is built with yellow brick masonry, white plaster jointing, and the outline is clear and very eye-catching. The main entrance is 12.6 meters high, the tower on either sides are nearly 18 meters high, the door is 4.7 meters high, 4.3 meters wide.
In front of gate there are 13 fan shaped steps, walking up the steps is hallway, and two copper-coated wooden doors, tall and majestic.
The wall above the gate of the mosque is a huge platform of 8 meters long, 10.5 meters from ground. Every grand festival, the platform will resound through the sky overnight with sheepskin drum and suona horn, which creates the joyful atmosphere for tens of thousands of Muslims who gather in Id Kah Square. Here is a sacred place, also the place for festival celebrating. As the gate tower in the entrance, it’s plastic art is the best, which can be regarded as a model of Uygur ancient building art and it has already become the symbol place of the ancient city of Kashgar.
【Main Hall】
On each side of Main Hall east wall there is a biparting door for people come in and out, in the middle there is an arch pattern on the wall of 1.8 meters wide, nearly 4 m tall, in which there are two windows on each side. On the west wall of the Main Hall there is also an arch pattern, 4.3 meters high, 3.1 meters wide.
On the south wall and north wall of Main Hall there are two doors and a window on each side, in the main hall there is a total of 18 pillars. On both sides of north and south is outer hall, and on the north outer hall west wall there are 14 niches, and 4 niches on the north wall. South west wall outside the mosque has 11 niches, and 4 niches in the south wall. In the middle of the 7th and 8th niches, there is a double door which is the back door of the mosque, and inside the door is a small courtyard. The north side outside the mosque there are five color caisson ceiling, 3.6 meters long, 3.2 meters wide, and there 4 in the south side.

Id Kah Mosque has become the gather place of all Xinjiang Muslims, everyday there are 2000 to 3000 people, during the Jumah on the Friday afternoon, six thousands to seven thousands of male Muslims as pilgrims will gather here for worship. And during Eid Al-Adha, all Muslims from everywhere in Xinjiang come here to worship.
Id Kah Mosque is not only essential and important place for religious activities in Xinjiang region, in ancient times or it was the important institution to spread of Islamic culture and cultivate talented person's of higher learning, many higher post Islamic clergies and scholars of north and south of Mount Tianshan even central Asia are graduated from here. And there are other influential poet, writer, historian and translator's also received a rigorous academic training here in the early years. After the founding of China, some respected patriotic religious people in the mosque who obey the law were also elected as people's representatives and CPPCC members, and they also made contributions to Xinjiang's history and religious studies.