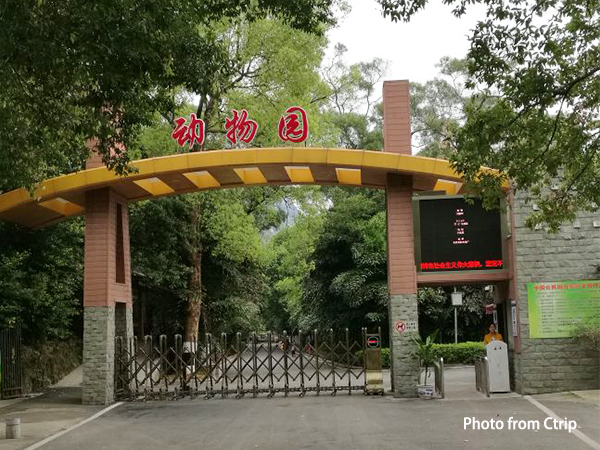 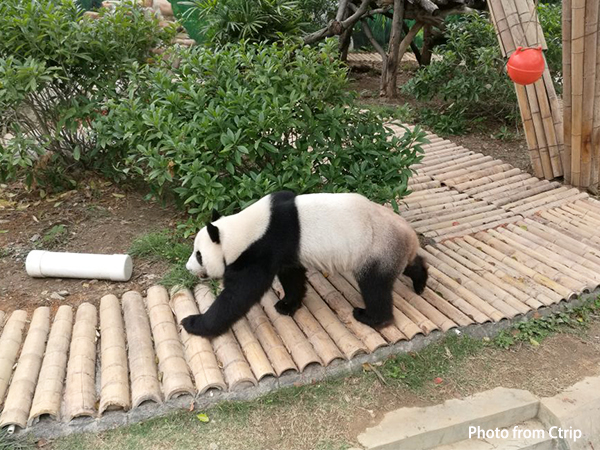 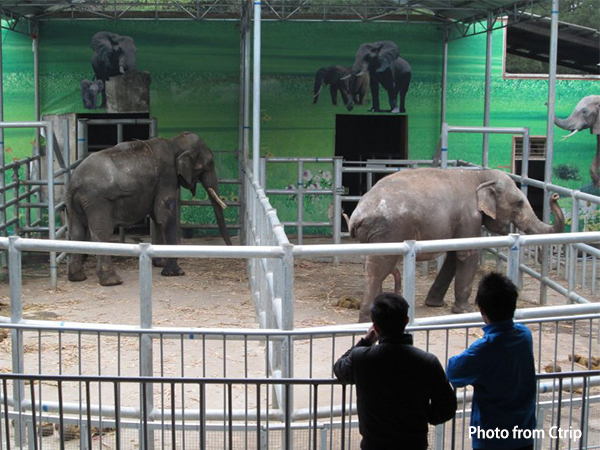 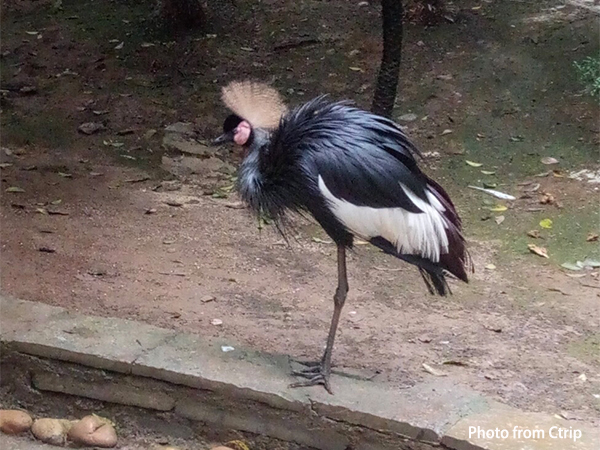 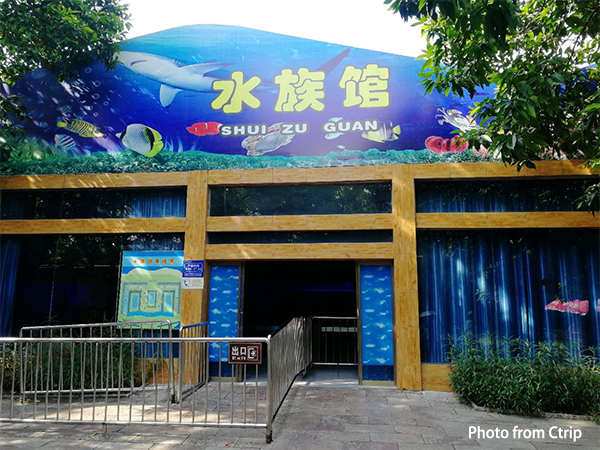 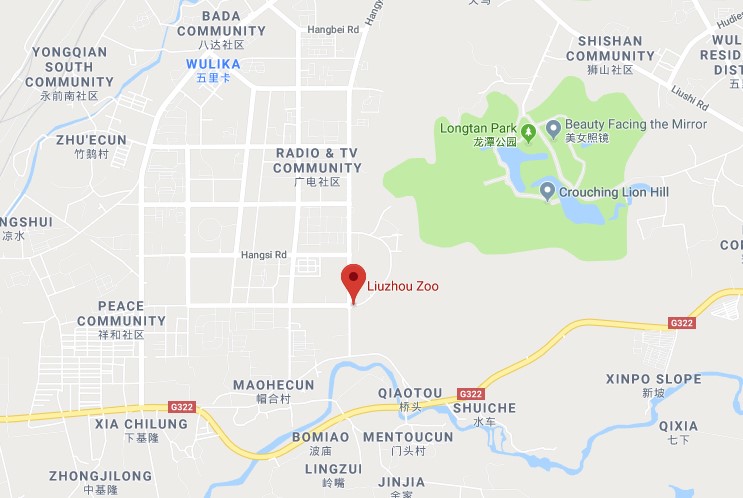 
Liuzhou Zoo, situated at No. 89, Hangyin Road, Liuzhou City, is a national AAAA-level tourist attraction, covering an area of 413.5 acres. It is about 5 kilometers from downtown Liuzhou. Liuzhou Zoo receives more than 1 million domestic and foreign tourists every year. Liuzhou Zoo is the only natural ecological theme park in Liuzhou that integrates artificial breeding, display and popular science education of wild animals. In 2014, it was awarded the popular science education base of Guangxi Zhuang Autonomous Region.

In 1956, the Liuzhou Municipal Government allocated 7,000 yuan to build a zoo. The original site was located in Liuhou Park, Liuzhou City. It was officially opened to the public in 1958, with a total area of 15 mu. On May 30, 2003, a new park was built at the site of the original Liuzhou airport oil depot. On October 1, the park leisure and fitness area were built and opened to tourists, named Liuzhou Maohe Park. On July 28, 2005, the Liuhou Park Zoo was moved to the Maohe Park Zoo. In 2006, it was changed name to Liuzhou Zoo.

At present, Liuzhou zoo has exhibited over 100 species with more than 700 animals. The beast halls are equipped with open space for activities. Tigers, lions, leopards, bears, etc., can be strolled in the grass and trees, appearing to be "live and fierce", no longer showing the "sleepy beast" as before. Sika deer, camels, ostriches, goats, etc., are mixed and stocked in low-lying bushes and woods.


The Bird Park also allows visitors to enter the large bird cage, watch birds between the bridges and live in harmony with the animals. New species such as scorpions, red pandas, and bimodal camels have been added to the park. The rarest one is the "world's most mysterious bird" - Gorsachius magnificus. Nanning Zoo presented 1 African lion, 6 ostriches, 10 white peacocks and 2 pony horses, enriching the variety of Liuzhou Zoo.

A rugged mountain forms a barrier, and the zoo built along the mountain. Liuzhou zoo is a comprehensive large-scale park and can be divided into leisure fitness area as well as animal viewing area. 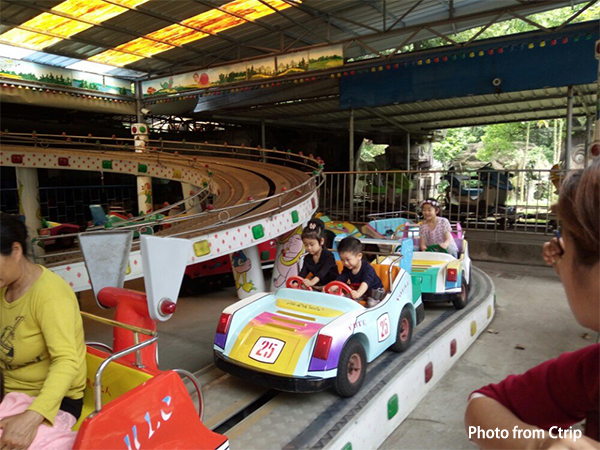 The leisure and fitness area can be entered without purchasing a ticket, including entertainment activities area, office areas, fitness square, an amusement park, and a viewing pavilion. The animal viewing area is built in a semi-ecological form, with a panda hall, an aquarium, a beast hall, a small animal hall, a bird garden, a monkey mountain, a herbivore stocking area, and an elephant hall.

Panda Hall was officially opened to tourists on April 19, 2013, detonating an unprecedented wave of public visitors. Located in the north of the zoo park, the Panda Hall includes indoor exhibition halls, outdoor exhibition halls, panda bedrooms, feed rooms, storage rooms, guard rooms and monitoring rooms. Two male pandas, Shulin - a native of Sichuan province, and Mingbang - an overseas returnee from Japan, are on display at the panda hall. Both pandas are on loan from the Chengdu research base of giant panda breeding in Sichuan province.

Black Bear Hall of The Liuzhou Zoo was built and put into use during the Spring Festival of 2019. The hall covers an area of about 1,000 square meters and includes three areas: the Black Bear Outdoor Activity Area and the Black Bear Indoor Bedroom Area and the Tourist Area.

The Herbivore Hall covers an area of 20,000 square meters. Animal activity areas are stocked with dozens of herbivores such as red kangaroos, red pandas, alpacas, sika deer, damhert, sambar, African ostrich, yak, camel, porcupine, emu, and donkey. Walking on the winding path of the herbivore area, deep into the living territory of sika deer, ostrich, kangaroo and other animals, visitors can appreciate the life scenes of herbivores chasing each other in the natural state, the coexistence of green hills and green trees.

The Ocean Aquarium is the first large-scale marine aquarium in Liuzhou, which covers an area of about 1,600 square meters and has a total of 47 exhibition cylinders. Among them, the largest exhibition cylinder in the museum has a tunnel for visitors to walk through. There are more than 100 kinds of marine aquatic animals in the aquarium, including several sharks such as whitetip sharks, blacktip sharks, lemon sharks, as well as clownfish and many other colorful tropical fish. In addition, sea turtles, seahorses, starfish, sea urchins, horseshoe crabs and other marine animals can be also found here.

The Birds Garden is built along the mountain and covers an area of 3,000 square meters. The park is blessed with green trees, small bridges and clear water as well as birds like egretta eulophotes, black swan, red-crowned crane, crown crane, peacock. In the beautiful bird garden, visitors can enjoy the colorful exotic birds, listen to the melody of birds, watch the birds play, and have zero contact with birds, showing the beauty of nature and the harmony between people, animals and nature.

In the middle of the park is a new dynamic dinosaur parent-child park built by the zoo. The cute camarasaurus and stegosaurus, the fierce and gentle triceratops, the flying master pterosaur and the ultimate hunter tyrannosaurus will take you on a journey back 200 million years to the Jurassic era. Compared with the giant dinosaurs, the squirrels walking among the trees are much smaller. After saying goodbye to the shocking Jurassic world, we will enter the magic world of squirrels, and the demon squirrels who settled in the zoo will easily give us great joy.

►Special groups: children under 1.2m in height, active servicemen, disabled persons and elderly over 60 will be admitted free of charge with relevant certificates.