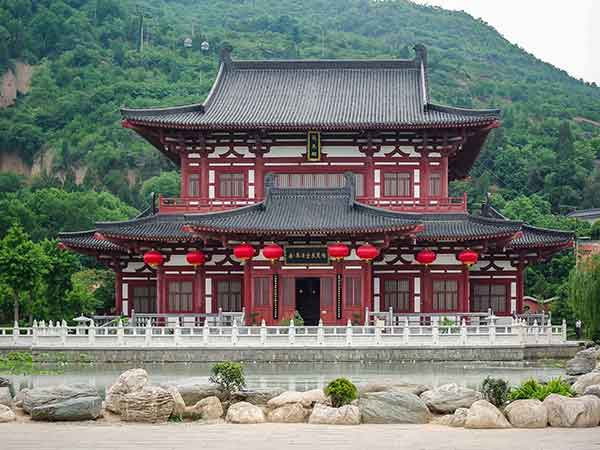 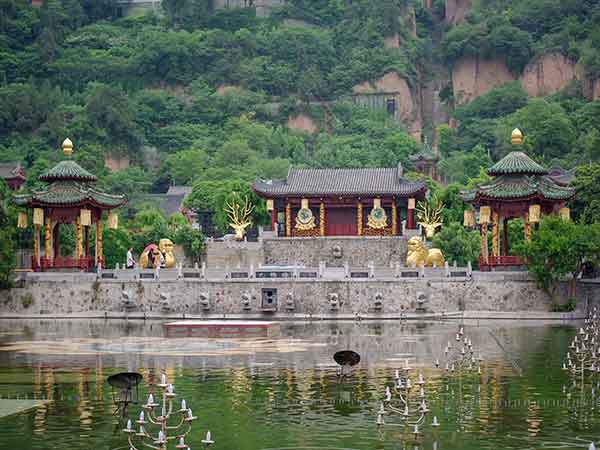 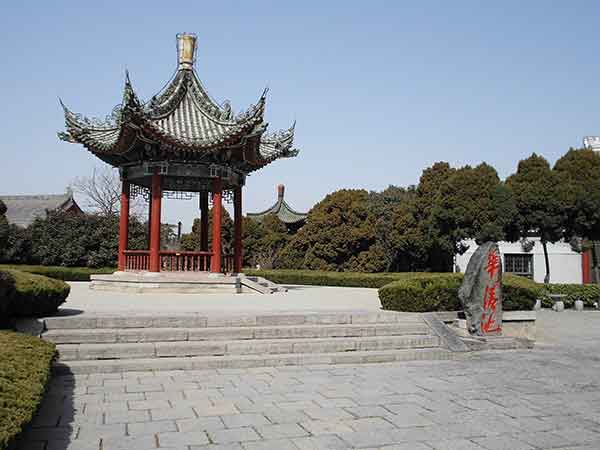 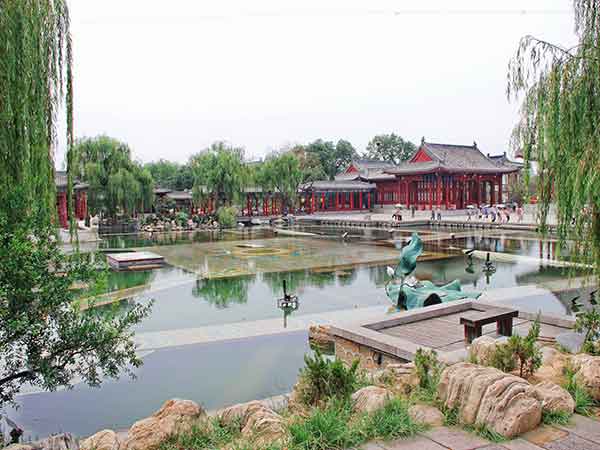 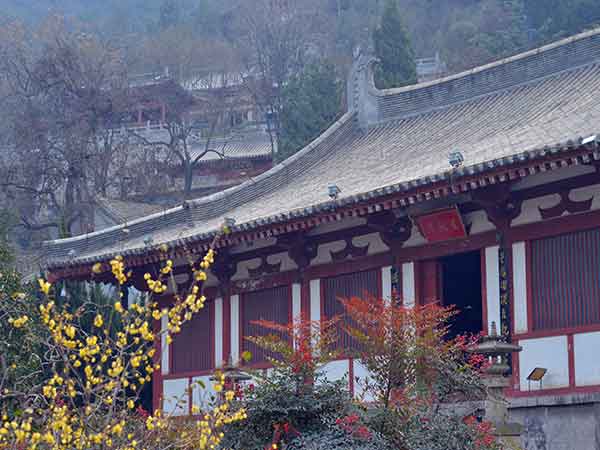 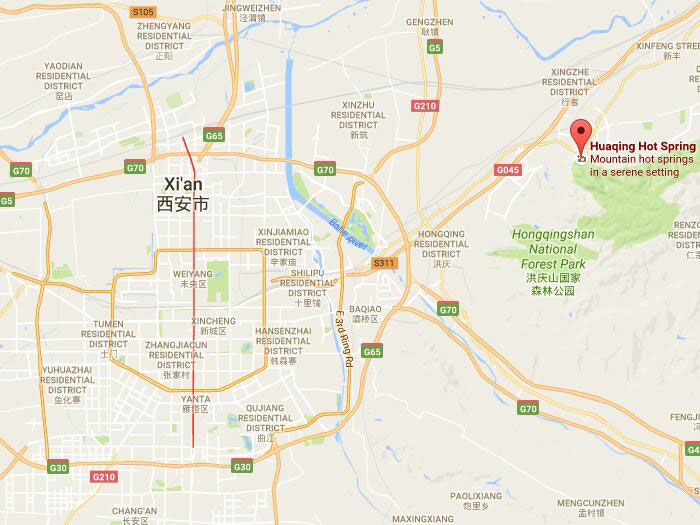 Huaqing Palace, or Huaqing Pool, is the model of royal garden in Shaanxi Province. In 1982, it was listed as the first batch of China's key scenic spot. In 1996, the State Council announced that Huaqing Hot Spring was the fourth group of key sites for units of cultural relics protection in China. Huaqing Palace, the Summer Palace, Yuanmingyuan Garden and Chengde Mountain Resort are also known as the four royal gardens of China.

Address: No.38, Huaqing Road, Lintong District,  Xi'an
Huaqing Palace is a natural spring at the foot of Mt Lishan in Lintong District, about 30 kilometers (18.6 miles) from Xi'an, Shaanxi Province. This hot spring is known as China's famous hot spring resort. Huaqing Hot Spring owns 6000 years history of hot spring use and 3000 years history of royal garden architecture.
There are four springhead in Huaqing Palace. They are all in a stone hole and the existing circular pool has the radius of about 1 meter with clear, colourless and transparent water seen at the bottom.The water temperature is stable in 43 degrees or so.

One of the four springhead was found in the Western Zhou Dynasty in the 11 th century(771 BC), while the other three were developed after liberation. The water in the spring contains various minerals and organic materials including lime, sodium carbonate, silica, alumina, sulphur, sodium sulfate and so on.
The thermal spring water is not only suitable for taking a bath or shower, but also for particular treatment of dermatosis, rheumatism arthritis and muscular pain. The bath building covers an area about 3000 square meters, and has over 100 bath pools with various of shapes. The big bath building can serve nearly 400 people at the same time.

Huaqing Palace includes a very long recorded history of almost three millenia, having functioned as the location for many palaces built throughout the reigns of previous Chinese dynastic rulers, such as King You of the Zhou Dynasty, Qin Shi Huang of the Qin Dynasty, and an expanded version by Wu Han of the Han Dynasty. Beneath the Tang emperors Taizong and Xuanzong, the palace framework was rebuilt and renamed the Huaqing Palace. However, through the events linked to the An Lushan rebellion, a lot of damage done to the site.
The famous love story between Tang Emperor Xuanzong and Yang Guifei (Lady Yang) can be seen from the poem Song of Regret which was written by Tang famous poet named Bai Juyi.

The poem recites:
On a cold spring day, he bestowed upon her the honor of bathing with him at the Huaqing pools
The waters of the hot springs were smooth, and washed over her pale white skin.
The palace maids helped her to leave the pool, because she was too delicate and lacked strength.
This was when she began to receive the emperor's advances.
Additional recent users seemed to be the Empress Dowager Cixi (慈禧太后) and Chiang Kai-Shek (蒋介石). However, these two used the hot spring with an unhappy occasions. The Empress Dowager stayed at the Five-Room Hall in the hot spring complex while Beijing was indeed occupied by the Eight-Power Allied Force in 1900. Just about four decades later, Chiang Kai-Shek was residing in the same room once the Xian incident (西安事件) happened.

【Furong Garden (芙蓉园)】
Furong Garden is an imperial garden with static sightseeing which combines with full-bodied style of the Tang Dynasty. There are more than 10 landscapes including Palace of Eternal Life (长生殿), Hot Spring Goddess Pavilion（温泉神女亭）, Furong Lake（芙蓉湖）and so on.

【Nine-dragon Lake (九龙湖)】
Nine-dragon Lake is next to the Furong Lake scenic area and it is an artificial lake built in 1959 . The lake is divided into two lakes, and there is a nine-dragon bridge stretch across them. Nine-dragon bridge has eight dragons spitting water over the bridge and one dragon under the bridge, then the name nine-dragon came out. To its south and east coast, there are palaces like Chenxiang Palace, Feishuang Palace and Yichun Palace. All these palaces are decorated with red colour and matched with pine, cedar, willow and lawn.
【Book Wall of Song of Regret ("长恨歌"书墙)】
Song of Regret, a famous poem written by the Tang Dynasty poet Bai Juyi to describe the love story between the Tang Ming Emperor and Yang Guifei, was loved by Mao Zedong (the top leader of the People's Republic of China from 1949-1976) deeply. He wrote this poem on the wall which is today's Book Wall of Song of Regret. The book wall is spectacular and magnificent with about 10 meters in length, 20 meters in height.
【Royal Soup Site of the Tang Dynasty (唐御汤遗址)】
The Royal Soup Site of the Tang Dynasty is found in April 1982. Through 3000 years exploration, there are five royal soup sites discovered including lotus soup, hitom soup, stars soup, prince soup and food soup. 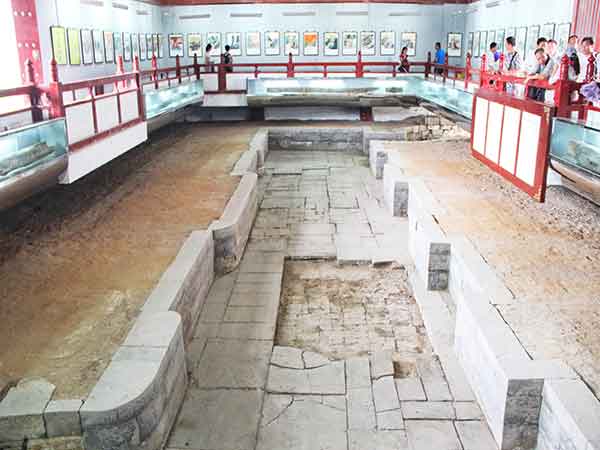 【Five-Room Hall (五间厅)】
Five-Room Hall is a hall with bricky timberwork. To its south, it is close to Mt Lishan, north to lotus pond. The courtyard is flat and the trees are verdant. It was named after the connection of five single halls.The Empress Dowager Cixi and Chiang Kai-Shek had been lived here.
【Tang Operras and Recreations (梨园)】
Tang Operras and Recreations is the first royal music art school in Chinese history which was created by the Tang Emperor Xuanzong. It is a center gathering music, dance and drama. It is regarded as the founder of Chinese opera arts.
Huaqing Hot Spring is a comprehensive scenic spot assembling tourism, cultural relics, garden, bath, entertainment and food. There, you can appreciate the natural sceneries and enjoy the hot spring.

Best time to visit Huaqing Palace: The best season for Xi'an tourism is from March to May in spring and from September to November in autumn. 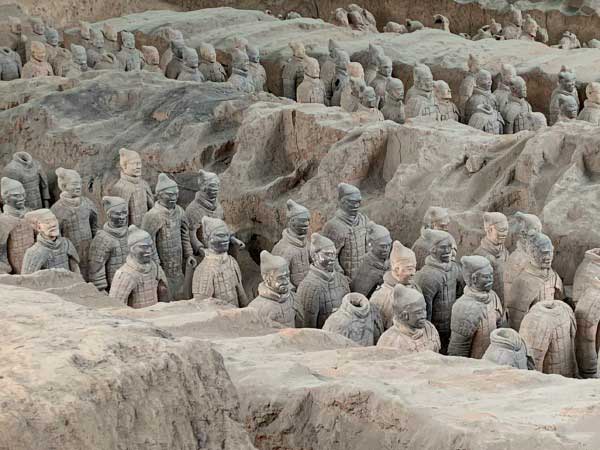