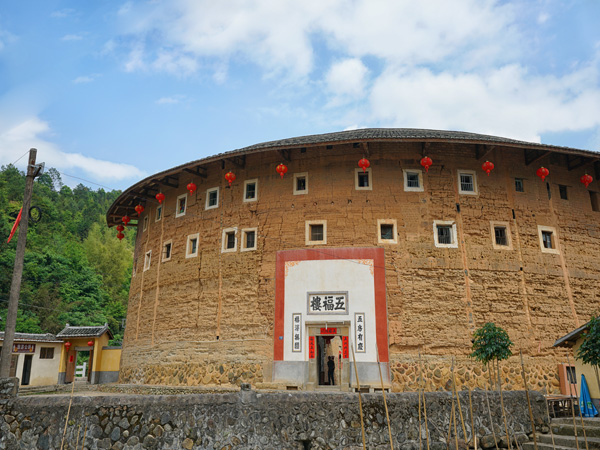 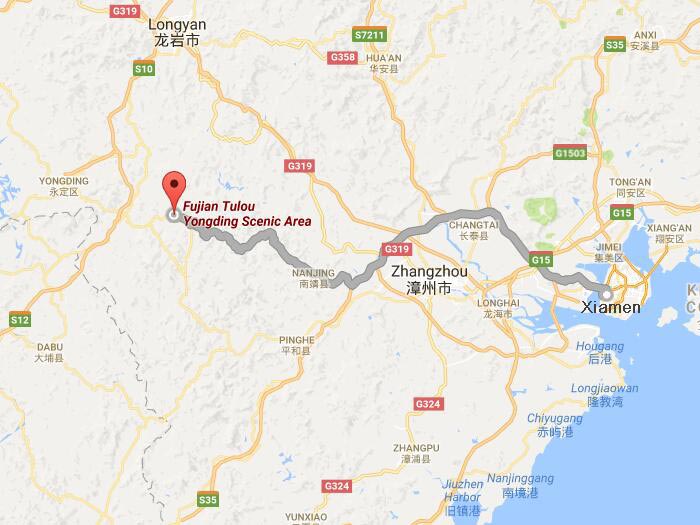 
Tulou, or earth building, is a unique and mysterious Hakka architecture with a thick earth wall enclosure found only in the mountainous areas in southwestern Fujian province bordering Guangdong in Southern China. Tulou is usually an enclosed buildings, mostly square or circular in configuration, with a very thick earth wall which is up to 6 feet thick and wooden skeletons, from three to five stories high, housing up to 80 families. These earth buildings have only one entrance, guarded by 4-5 inch thick wooden doors reinforced with an outer shell of iron plate. The top level of these earth building have gun holes for defence against bandits. What is amazing about these earth buildings is the fact that in spite of the earth wall, some of them are more than 700 years old, surviving through centuries of natural elements, including earth quakes, yet still standing solid. There are more than 20,000 earth buildings to be found in southern China.

Longyan is to the northwest of Xiamen. In the first year of the Tianbao reign of the Tang Dynasty, the place was named after Longyan Cave. To elude the endless dispute, the Han people in central China moved to Fujian from the end of Western Jin Dynasty (265-316), giving birth to the Hakkas. All the Hakkas take Longyan as the milestone place where their ancestors said good-bye to central China and become the 'guest' in remote place. Old town of Changting has been known as the capital of the Hakkas, and the Tingjiang River is regarded as the Mother river by the Hakkas. Yongding is the most famous spot where one can in Longyan, whose transportation is very convenient.

There are more than forty Tulous in Hongkeng Village of Yingding County, including Zhenchenglou, nicknamed 'the prince of tulou'. It built in 1912 by the descendents of a rich tobacco merchant. Zhenchenglou is a double ring tulou, its outer ring is 4 stories high, total 184 rooms, the inner ring is 2 stories with 32 rooms. And in Gaotou Village Tulou group, one can see Chengqilou, nicknamed 'the king of tulou', built in 1709. A four ring rotunda tulou, the outer ring is 4 stories high, with 72 rooms on each level, the second rings are 2 stories high, with 40 rooms on each level, the third ring is one story with 32 rooms; the community hall is at the center.