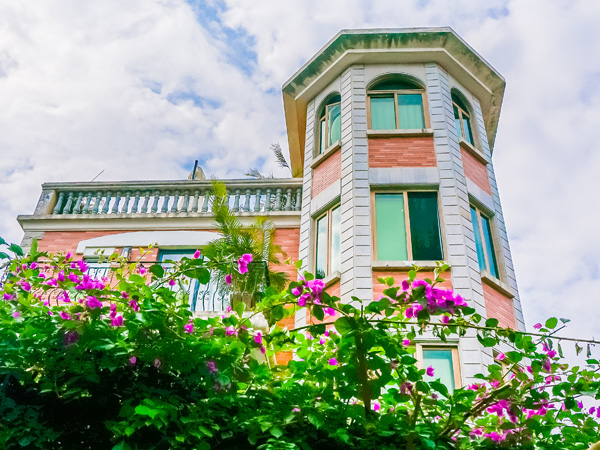 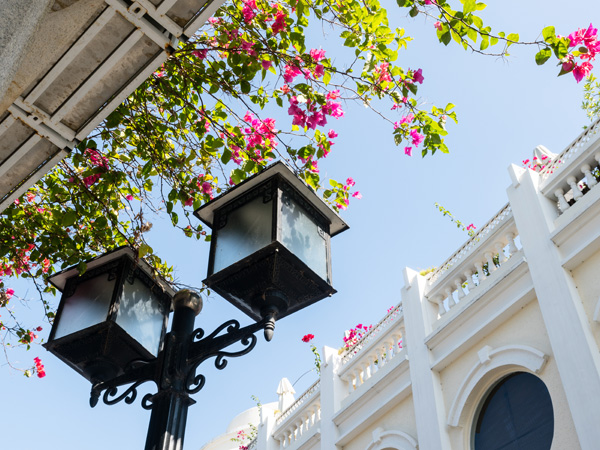 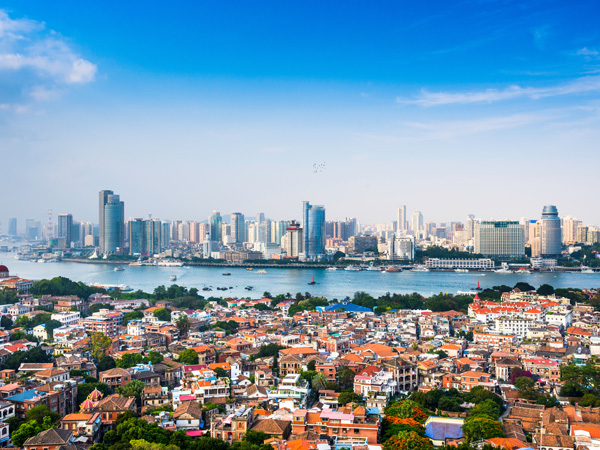 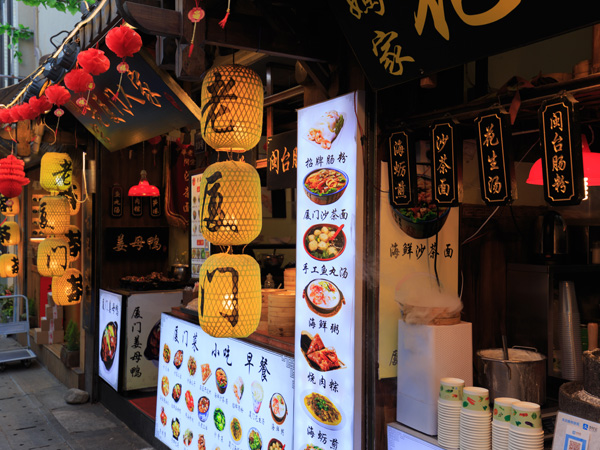 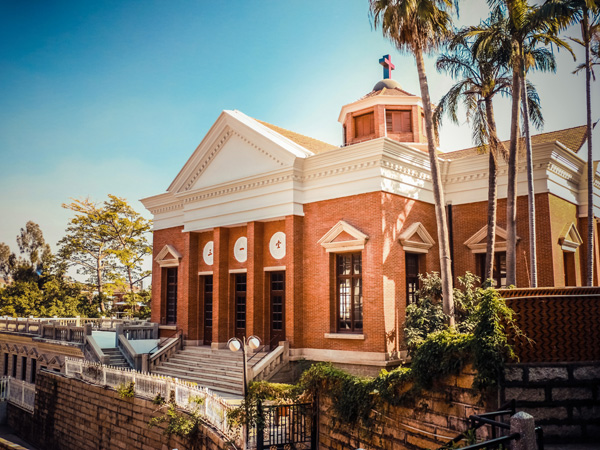 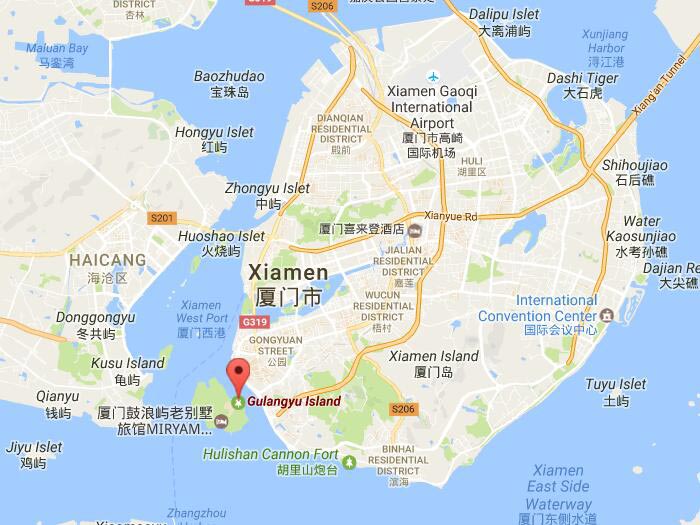 Gulangyu Island is renowned for its beautiful beaches, winding lanes and its varied architecture; it ranks in one of the top most-scenic areas in China


Xiamen Gulangyu Island covers an area of 1.87 square kilometers. Sunlight Rock, the highest peak on the islet, is the symbol of Xiamen. Because the holes in the southwestern reefs hit by the waves will make sounds like beating the drum, so this area got its name "Gulang Islet".

On the island, tourists can find the winding coastal lines, natural and gentle seaside bathing grounds with the fine sands, and oddly shaped reefs. The whole islet offers a clean, tidy and tranquil environment. Besides, many building on the islet showing both the Chinese and foreign architectural styles have been well preserved. Hence Gulang Islet is known as the gallery of International architecture.

The residence on the islet love music very much. With a small population of 10,000 or so, Xiamen has over 600 pianos, ranking first in China in the density of pianos. Hence it is called the land of music and island of pianos.

Walking on the street, visitors can hear the melody of pianos everywhere. The winding and zigzag paths are another major characteristic of Gulang Islet. All the paths on the islet are linked with each other, with the delightful serenity of seclusion.

To protect tourism resources on the islet, motor driven vehicles are forbidden to run on the streets, except for a small number of sightseeing storage battery cars for carrying tourists. Therefore the islet is quiet without the noise of traffic, making tourist have fun to stroll on the streets. When all the neon lamps are lit in the evening, the whole islet is elegantly decorated, presenting beautiful scenes different from the daytime.

Gulang Islet gathers over 1,000 architectures, showing different styles and a good combination of Chinese and Western elements. They include traditional Chinese temples with upturned eaves and corners, one-story houses in the style of South Fujian Province, the eight-trigram building which now is Xiamen Museum, showing both the Chinese and foreign architectural features, and small and exquisite Japanese houses as well as the former consulates of Western countries with continental style of 19th century.

【Gulangyu Piano Museum】Gulangyu Piano Museum is the only museum in China displaying various kinds of antique pianos from different places in the world. All the pianos in the museum were donated by Hu Youyi, a collector of pianos who is a native of Gulangyu Islet and now resides in Australia, including precious pianos and over 60 ancient piano lamps collected by Mr. Hu during his life.

Piano Museum, which is finished on Gulangyu in January, 2000, is located in "Tingtao Pavilion" of Shuzhuang Garden. It covers an area of 450 square meters, and it is divided into two floors.
The first of the two halls opened January of 2000, and has the collection’s oldest piano. Although few pianos are actually built by pianists, this instrument was crafted in 1801 by visionary composer Muzio Clementi (1752-1832).

There are 40 more old pianos displayed in the museum (collected by patriotic overseas Chinese Mr. Hu Youyi), among which are rare and valuable gold-plating piano in the world, the oldest four-corner piano in the world and the oldest and biggest vertical piano, antique hand-power piano, pedal auto-performing piano, 8-pedal ancient piano, etc.

Gems of the collection include a gold-plated piano, an ancient 8-pedal piano, an antique hand-powered organ and the oldest four-corner piano. It has been visited by famous pianists and conductors from around the world. 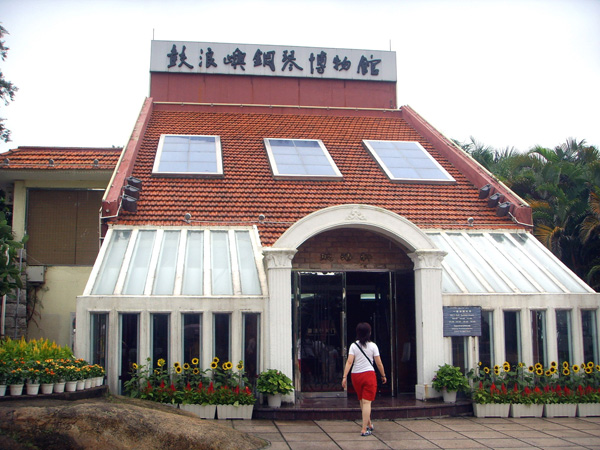 【Shuzhuang Garden】
Shuzhuang Garden is a private villa first constructed in 1913 by Lin Erjia, a wealthy businessman from Taiwan. Shuzhuang Garden is known for its well-conceived layout and borrowed scenes. The designer cleverly adopted the hiding, borrowing and ingenious methods to design the garden, making man-made structures and natural scenery well blended in great harmony.

Mr. Lin gave it the name "Shuzhuang" after his stylized name of "Shuzang". The gardenis divided into two parts, with "Canghai" facing the sea and "Bushan" against the hill, each having five scenic sights. The Garden contains the Gulangyu Piano Museum, which is "China's only and the world's first-class" treasure house of pianos, with nearly 100 precious historic pianos from throughout the world. The museum is an epitome of Gulangyu's musical culture.

Hiding elements: the ocean remains hidden from view even if you walk right up to the garden gate and enter it. The view was interrupted by a high wall. When you look back by chance, a plaque of "Cang Hai (Hiding Elements)" hanging high up on the inner side of garden gate comes into the view, and then you will burst upon the implication of hiding elements. However, once you get out through the Moon Cave Gate, the seascape leaps into view. By means of this device, first hiding and then revealing, wonderful results will be achieved. 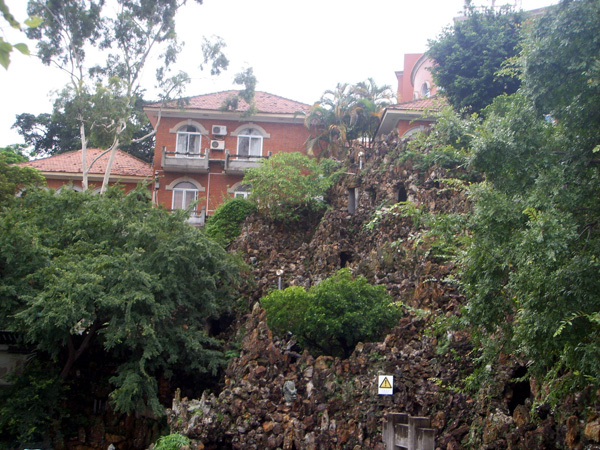 【Bright Moon Park】
Bright Moon Park is the theme park to commemorate Zheng Chenggong, a national hero. First built in 1985, the park was named because of a poem which aiming to cherish the memory of the hero and Taiwan.

The name of the park derives from the line "I had a sleepless night thinking of Your Majesty as the bright moon light streamed in through the curtain", from the “Two Yanping Lords Poetry Collection" composed in remembrance of the hero and the yearning for the return of the motherland's treasured island of Taiwan.

The bronze statues of Zheng Chenggong and his Ministry are slightly larger than their real figures respectively. In addition, the rest statues of the military and horses are spread toward the sides, which form an extended line of sight range, and attract many people’s attention.

It is worth mentioning that a giant granite statue of Zheng Chenggong stands prominently on the Covering Rock (Fudingyan), which completed on August 27, 1985. This Colossus is 15.7 meters high and weighs 1617 tons, caved with 23 layer of 625 granites named “Quanzhou White”, really spectacular.

【Sunlight Rock Scenic Area】
Sunlight Rock is the most famous scenic spot in Xiamen. Sunlight Rock consists of two hugh rocks, one horizontal and the other vertical. The two rocks leaning on with each other, with an elevation of 92.68 meters, form the highest spot of Gulangyu Island. The lofty and rugged rocks in the mountains form many caverns and gullies, while pavilions, kiosks and terraces are tucked away in the lushly growing woods. When Zheng Chenggong, China's national hero, recovered Taiwan, his troops were stationed here, leaving behind a lot of stories.

Sunlight Rock's oldest carving was inscribed about 400 years ago on a rock near the main gate and reads, "Gulang Dongtian": "Gulangyu—a Fairyland." The 100-year-old characters to the left read, "Lujiang Diyi". The horizontal characters, "Tianfeng Haitao", carved in 1915, suggest that you can hear both roaring wind and raging sea as you climb Sunlight Rock.

Sunlight Rock Temple, one of Xiamen's four most important temples during the Ming and Qing Dynasties, was built between 1506 and 1521 and called Lotus Temple. It was rebuilt in 1596 and renamed Sunlight Rock Temple, and is now dedicated to worship of Guanyin, goddess of mercy (a formerly male deity whom Chinese women changed to female over 1,000 years ago because they felt male deities were unsympathetic to their needs).

How to Get to Gulangyu Island in Xiamen

Learn more detailed information at Gulangyu Island Ferry Schedule. Visitors can reach it by ferry from the ferry terminal in Xiamen. Local residents are allowed to use a shorter 5 minute ferry to/from Heping Ferry Terminal. Tourists and non-locals must now take a longer 20 minute ferry ride from Dongdu International Terminal