Zhangjiajie, an emerging tourist city, has already been one of the most popular destinations in China. Its traffic is in a particularly important position. Whether travelling by air, train, or long-distance bus, Zhangjiajie is now easily accessible, with a complete transport network which a tourist city should have.

External Traffic: how to get to Zhangjiajie 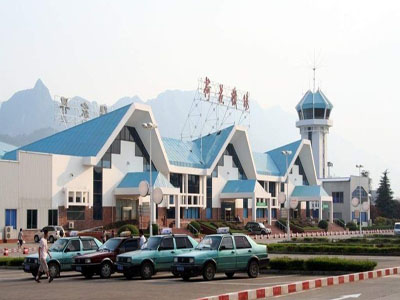 Travel to Zhangjiajie by air
Zhangjiajie Hehua Airport is located in the Hehua Village of Yongding District, five kilometers from the urban area. It is an important transportation project in Hunan Province. The Zhangjiajie Hehua Airport, built in 1994 and put into use, is a 4D level tourist airport. In 1997, approved by the State Council, Zhangjiajie established the air ports which successively opened routes to Hong Kong and Macau, international passenger charter flights to Seoul and Busan in Korea, Fukuoka and Osaka in Japan. It has navigable mainland cities of Beijing, Shanghai, Guangzhou, Nanjing, Shenzhen, Xi'an, Changsha, Qingdao, Shenyang, Zhengzhou, Chengdu, Chongqing, Xuzhou, Tianjin, Ningbo, Wenzhou, Harbin, Hangzhou, Shantou; but some cities do not have flights to Zhangjiajie every day. The airline schedule is not settled and the displayed flights are subject to change according with the local ticket office computer.
Currently, there are daily flights to Zhangjaijie from Guangzhou, Beijing, Shanghai, Nanjing, Xian, Changsha, Shenyang and Qingdao, and weekly flights to Zhangjiajie from Chengdu, Hangzhou, Chongqing, Shenzhen, Tianjin, Kunming, Shijiazhuang, etc.
Passengers can take Shuttle buses from Zhangjiajie airport to the city center within 20 minutes. Or you can take city bus no. 4 (Zhangjieji City Circular Line running between 08:00AM – 18:00PM, the station is about 100 meters from the exit of airport) to downtown Zhangjiajie within half an hour, as well as the local Central Bus Station to transfer to buses to the Zhangjiajie National Forest Park, Wulingyuan Scenic Area and Tianzi Mountain.

Please be noted: Displayed flight schedules are for reference only and subject to change without prior notice. Please refer to the official schedule while reserving your flight.

Travel to Zhangjiajie by railway
Zhangjiajie has few railway lines, but it has Shichang Line to link with other railway artery. Now, it has opened a number of passenger trains to some large and medium cities in China. There are regular trains to Zhangjiajie from Beijing, Shanghai, Guangzhou, Shenzhen, Changsha, Nanning, Guiyang, Yichang, Zhanjiang, Zunyi, etc. Besides, Zhangjiajie has conveniently originating trains to Guangzhou, Changsha, Nanning, Guiyang and other cities. For those who would like to travel to Zhangjiajie by bullet train, please be noted that China’s high-speed railway system has not yet reached to the city. However, there are high speed trains to Changsha.
Tips: You are suggested to take Train T8303 (about 4 hours) from Shangsha to Zhangjiajie, if you travel to Zhangjiajie only, and take K9031 (about 10 hours) if you plan an extension trip to Fenghuang Ancient Town from Zhangjaijie.
Travel to Zhangjiajie by bus (highway)
Zhangjiajie city has only one bus terminal which was officially open in 2012 and is an integrated station located in the urban area, about five minutes' walk from Zhangjiajie train station. It has inter-city buses to some large and medium-sized cities outside including Wuhan, Shanghai, Zhengzhou, Beijing, Guangzhou, Shenzhen, Yichang, Guilin, Fuzhou, etc. also, it has inter-city buses sent to the provincial cities and short-distance buses to Zhangjiajie National Forest Park, Wulingyuan and other surrounding scenic areas, and also the nearby cities and town like Changsha, Yueyang, Jishou, Changde, Fenghuang, Shaoyang, Zhuzhou, Anhua, Lixian, Cili, Yongsan, Yongshun, Yiyang, etc.

Zhangjiajie city is very small, and thus the city's bus lines are also relatively few, mainly for No. 1- No. 10 bus lines which take a two-way cycle running. The travel time is adjusted according with different seasons and routes, generally from 6:00-20:30. Most of the buses are pay-to-the-driver buses which charge one way 1 yuan per person. Bus No. 4 bus can take you from Zhangjiajie city center to the airport; Bus No. 6 can take you to the train station; Bus No. 1, 2, 3, 4, and 5 can take you to the motor station; in addition, visitor can take Bus No. 10, an urban cycle bus, to the Tianmen Mountain cableway and Tujia Folklore Garden. 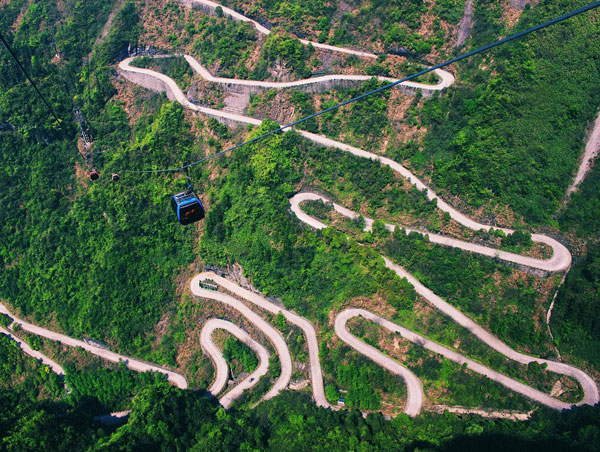 There are two cable cars on Tianmen Mountain and three cable cars in ZJJ National Forest Park (including the Bailong Elevator), which bring in much convenience for the travels who don’t expect much mountain walking or hiking and are friendly to people with disabilities and wheelchair bounded.