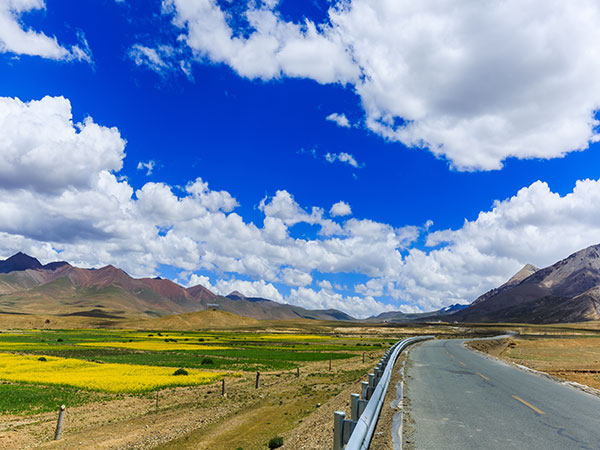 The North Line, from Chengdu to Dongeluo coincides with the south line, and separates from south line at Dongeluo, from Qianning, Daofu, Luhuo, Ganzi, Dege, Jiangda, Chamdo to Bangda and then coincides with south line again leading to Lhasa with a total length of 2412 km. 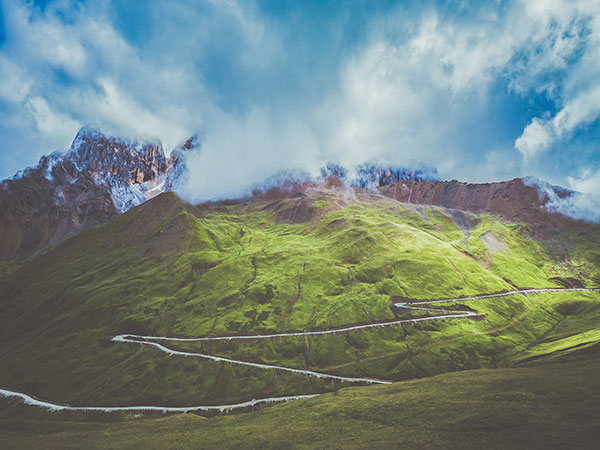 In the early 1950, the liberation army was ordered to Tibet to liberate Tibet and repair the road at the same time. The 110,000 liberation army, engineering technicians and labors constructed the Sichuan-Tibet Highway in more than 4 years. The project is huge and dangerous. During the construction, more than 3000 people died for the road due to the steep terrain.
From 1977 to 1984, the maitanance of the Sichuan-Tibet was interrupted, as a result, the harsh natural enviroment paralyzed the Sichuan-Tibet Highway.
Before the highway was opened to traffic, it took half to one year of the round trip to walk or ride between Chengdu and Xining. In 1984, for the 30 years anniversary of Qinghai-Tibet Highway, and a Monument was built for remembering the PLA's glorious achievements and tremendous sacrifice.
From 1985 until now, the government keeps on repairing the Sichuan-Tibet Highway, for the stability of Tibet and its border areas, as well as strenthening the national economic construction.

Sichuan-South Line officially opened to traffic in 1958. South line starts from Ya'an, separating from State Road 108 to the west over the Erlang Mountain. During the way, it passes Dadu River, Yalong River, Jinsha River, Lancang River and Nujiang River, runs through Yajiang, Litang, Batang, and Jinsha River Bridge to Tibet, and then by Mangkang, Zogang, Bangda, Basu, Ranwu, Bomi, Nyingchi, Mozugongka, Daz and finally arrive at Lhasa.
The south line from Chengdu to Lhasa is 2142 km. There are numerous mountains and canyons along the South line, and the scenery of South line is also more beautiful than the north line, especially in Nyingchi.

With higher altitude and less population, the scenery of the North Line is more original and magnificent compared to the South Line, since it passes more pasturing areas. There are two main lines for the North Line of Sichuan-Tibet Highway.

►The Small North Line: The North Line starts from Chengdu, passing Ya'an to Garzi, and through Jinsha River Bridge to Tibet, and then meets the south line at Bangda, passing Bowo and Bayi to Lhasa, with a total distance of 2413 km.
►The Big North Line: It starts from Chengdu to north first, separating from National Road 213 at Wenchuan, from Shuajing Temple, through Ma'erkang, Chamdo to Lhasa, with total journey of 2412 km.
Along the North Line, there are a great deal of high plateau lakes, snow mountains and hot springs, however, fewer visitors will stop on the line. Accordingly, it's the best line for those visitors who are wilderness explorers.

Scenery along the Sichuan-Tibet Highway

There are all together 72 curves on the highway of Nujiang River part. This part is considered to be one of the most challenging part of Sichuan-Tibet Highway. 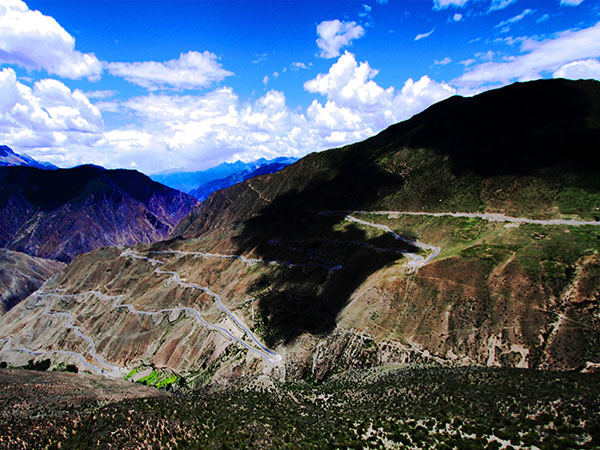 With an altitude of 4290 meters above sea level, Zheduo mountain is a geographic dividing line. 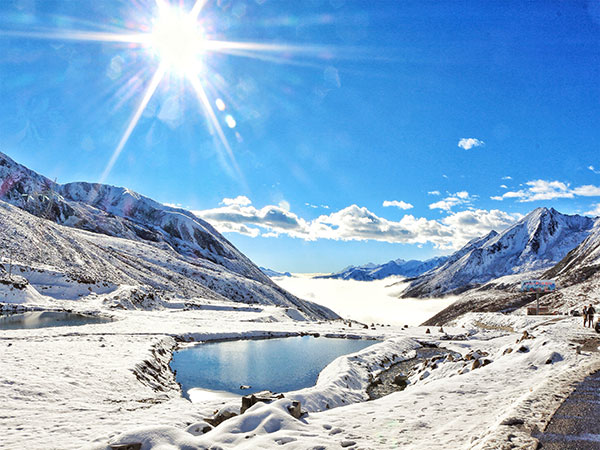 The part of Sichuan-Tibet Highway in Ranwu is seemed to be the most beautiful part along the way on the highway. With all the splendid views of forests, lakes and snow mountains, Ranwu Lake area is reputed as "Switzerland in Tibet". 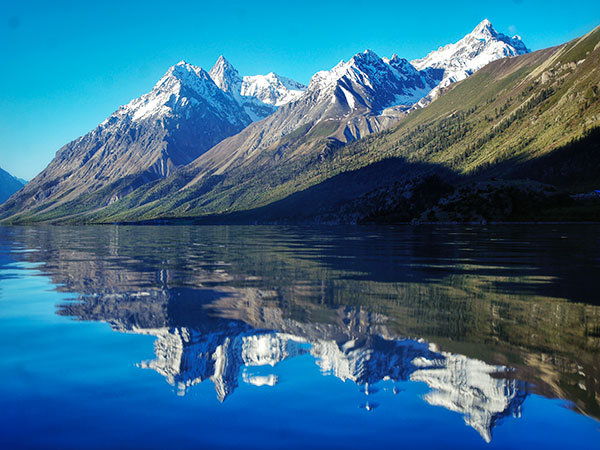 Located at the southeast of Yarlung Zangbo River, Nyingchi is said to be a green pearl on the Tibet Plateau. 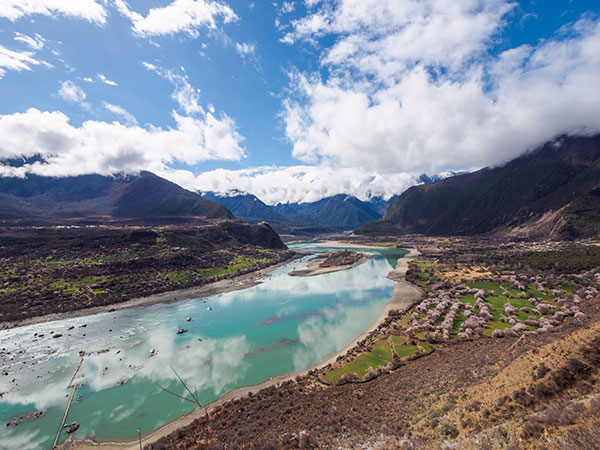 A mysterious and beatiful town in the west of Tibet. 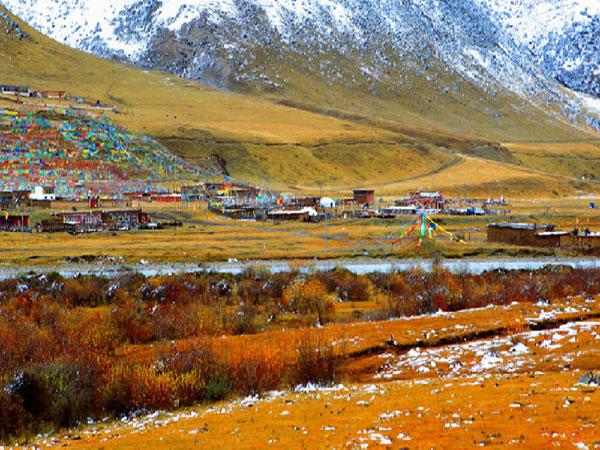 With an altitude of 5600 meters above sea level, Que'er Moutain is majestic with glaciers in both north slope and southeast slope valley. 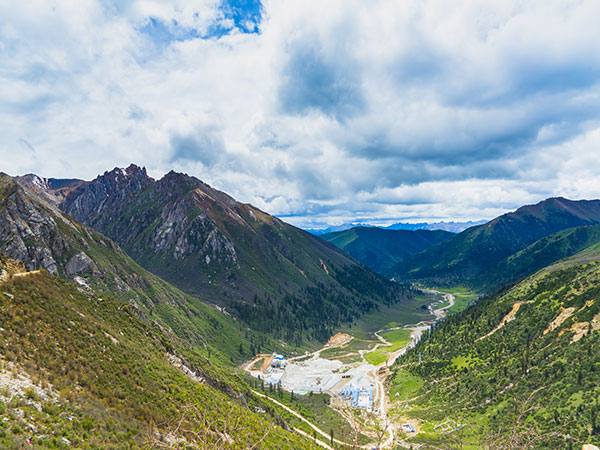 Tips for Traveling to Tibet by Sichuan-Tibet Highway

1. There are buses from Chengdu to Lhasa. More buses in summer, but time is not fixed. The buses and ticket office are at Baima Temple.
2. From Chengdu to Chamdo, there are at least 3 buses every week.
3. The best time to enter Tibet from Sichuan-Tibet Highway is May, Mid-August to October. From May to August is the rain season of western China.
4. Most of the areas long the road are plateau sections. People need to pay attention to the high altitude sickness. It is recommended to bring Rhodiola rosea with you.