Qinghai-Tibet Railway is the world’s highest and longest high plateau railway, and is reputed as the "Heaven Road”. It starts from Xining City in Qinghai and ends at Lhasa in Tibet, extending 1956 km. 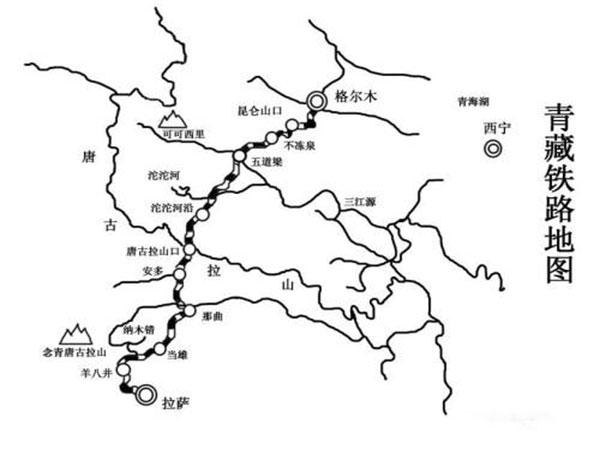 Qinghai-Tibet Railway or Qingzang railway starts from Xining, Qinghai, runs westward to Lhasa, Tibet Autonomous Region, passing through Nachitai, Wudao Liang, Tuotuo River, Yanshiping, over the Tanggula Mountains, via Tibet Amdo, Nagqu, Dangxiong, Yangbajin to Lhasa, it is the most important way to get into Tibet.

Most parts of the Qinghai-Tibet Railway are located on the high altitude areas and the depopulated zones. It must overcome four problems, the permafrost, high altitude, ecologically fragile, bad weather. Until March 25th, 2006, the Qinghai-Tibet Railway project have got a total investment of 28.5 billion yuan, of which environmental projects for investment reached 1.2 billion yuan, which is quite rare among the individual projects for environmental protection in the world. 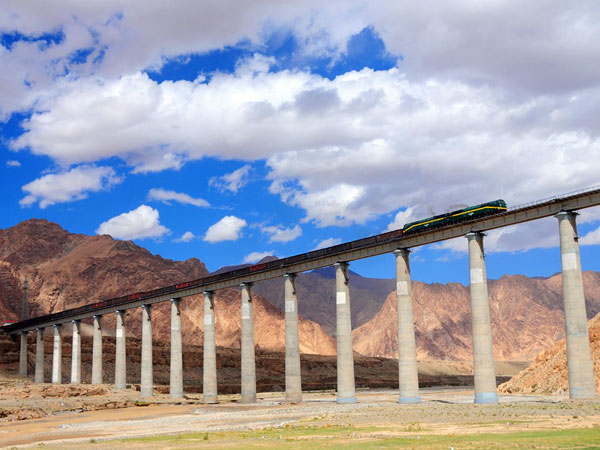 The total length of Qingzang railway is 1,956 km. Construction of the 815km section between Xining, the capital city of Qinghai Province and Golmud was completed by 1984. The 1,142 km section between Golmud and Lhasa was inaugurated on 1 July 2006. The first two passenger trains were ‘Qing 1' (Q1) from Golmud to Lhasa, and ‘Zang 2' (J2) from Lhasa to Golmud. This railway is the first one to connect China proper with the Tibet Autonomous Region, which is for the reason of Tibet's altitude and terrain. Testing of the line and equipment started on 1 May 2006. Trains run from Beijing, Chengdu, Chongqing, Xining and Lanzhou. The line includes the Tanggula Pass, at 5,072m (16,640 feet) above sea level, is the world's highest rail track. While the 1,338 m Fenghuoshan Tunnel is the highest rail tunnel in the world, which is at 4,905m above sea level. The 3,345-meter Yangbajing Tunnel is the longest tunnel on the line, which is about 4,264m above sea level, 80km northwest of Lhasa. there are more than 960km, or over 80% of the Golmud-Lhasa section stay at an altitude of more than 4,000 meters. Also, there are 675 bridges, the length is around 159.88km, and more than half the length of the railway is laid on permafrost. In the Golmud to Lhasa part of the line, 45 stations are open, and there are about 38 stations are unstaffed, which are monitored in the control center in Xining. There are 13 more stations are still planned. 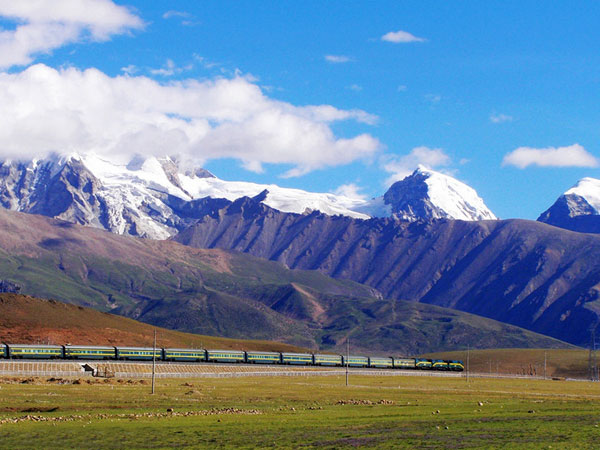 Main Stations on the Qinghai-Tibet Railway

Starting from Qinghai to Tibet, the main railway stations along Qinghai-Tibet Railway are:

Lhasa railway station is the largest station and also one of the landmark projects of the Qinghai-Tibet Railway. It is located at the south bank of the Lhasa River in Liuwu Village, Doilungdeqen County of Lhasa, with an altitude of 3600m above sea level. Lhasa Railway Station is the terminal station of the Qinghai-Tibet Railway, and also the largest station for transport of both passengers and goods. 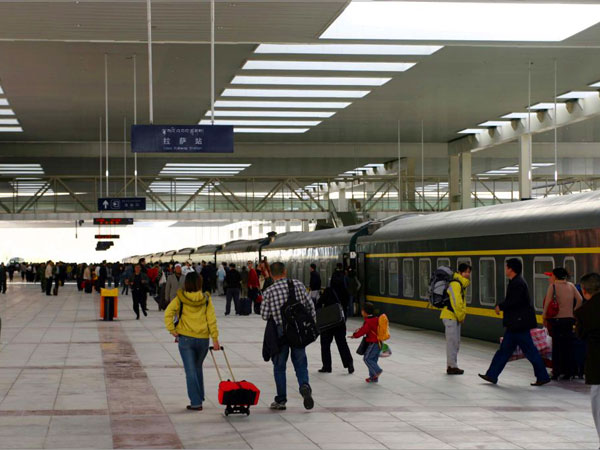 What to See along the Qinghai-Tibet Railway


Tongtian River
Passing Tongtian River Bridge, the train goes into an area of gorges. The Tongtian River, with the length of more than 800 km, is broad and slow flowing across the Tanggula and Kunlun mountains ranges. The train then runs deeper into Tanggula Mountains, stopping at Tanggula Station. With an altitude of 5,072m above sea level, it is the highest railway station in the world. The mountain is divided into eastern and western parts. The western part offers a cold, desert vista, while the eastern presents the views of shrub and grasslands. The pass is the natural boundary of Qinghai Province and Tibet Autonomous Region. The earth is under constant permafrost and the weather is unstable. Even in summer, the road here is often blocked by heavy snow. The oxygen content in the air is only 60% of that at sea level. Passengers will have some reaction due to the high altitude at the site.


Nagqu
Departing from the Tanggula Mountain Pass, the train enters Tibet Autonomous Region. The first district you will go through is Nagqu, in the northern part of Tibet. Then comes to the Northern Grassland. The summer scenery here is like a painting of blue sky, white clouds, rainbow, cows and sheep and green grass, which is really a good view along the Qinghai-Tibet Railway. 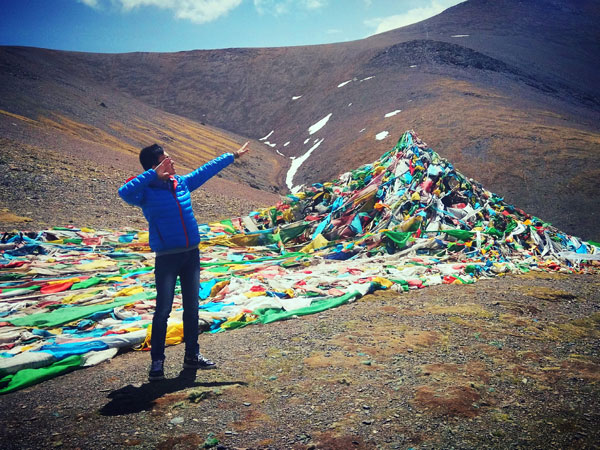 Namtso Lake
After Nagqu, the train comes to a vast piece of highland marsh. Here you can usually see scattered herdsmen huts, around which cows, sheep and horses are grazing. As more evidence of life appears along the line, the train approaches Dangxiong Town. The town is located at the east of Namtso Lake. Dangxiong means 'the selected grasslands' in the Tibetan language. It is a busy place making you feel like you are in Lhasa. 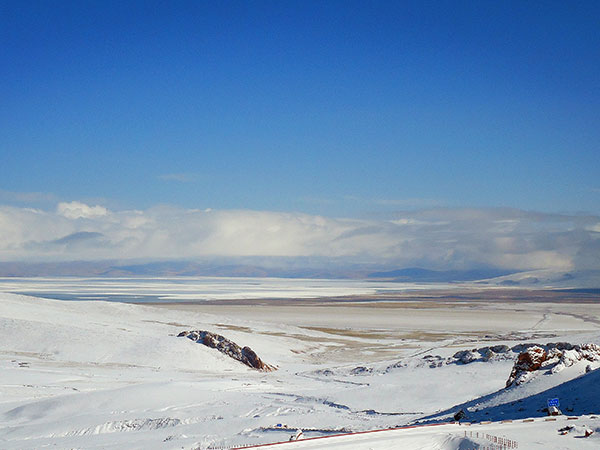 Yangbajing Town
Yangbajing Town is the eighth station on the line. Passing an alpine area of gorges, the train approaches Duilongdeqing County. Trees start to reappear, mostly are Tibetan willow. Next, the Lhasa River appears and the train is getting closer and closer to the final destination - Lhasa.