For Tianjin is closed to the sea, Tianjin cuisine places a heavy focus on seafood. It is characterized by a variety of seafood that combines special features of Shandong, Sichuan, Huaiyang and Zhejiang cuisine to form a unique style of its own. Many tourists are interested in Tianjin because of its many appealing foods. Here will introduce some famous cuisine for you to explore while you are traveling in this beautiful city. These traditional and famed snacks cannot be missed should you ever come to visit this charming municipality.

Eight Great Bowls (Chinese name: 八大碗) is one of the most famous dish in Tianjin. It is a combination of eight mainly meat dishes. It can be further classified into several varieties, including the rough, smooth, and high.

Lone diners and small groups would do well to steer clear of ordering the Eight Great Bowls, as the feast that appears on the table would be overwhelming to even the most voracious eater. Traditionally, this dish – or more accurately, set of dishes – is ordered by larger banquet-sized groups of eight or more people.

Tianjin's snacks are even more attractive and unique that its dishes. It's worth trying the fried dough twists, ear-hole fried cake, and Goubuli stuffed meat buns, thin pancakes, fried dough sticks, rice-flour cakes, and so on.

Goubuli Stuffed Buns (Chinese name: Goubuli Baozi, 狗不理包子) is a famous and traditional brand of steamed stuffed bun (Baozi), and is also famous throughout China. They are known in whole China for its special ingredients and methods used. Founded in 1858, it is one of China's longest established brands. Each Goubuli bun has eighteen wrinkles.

There is an interesting story telling the coming of the name “Goubuli”. There was a boy named Gao Guiyou who had a terrible attitude and could ignore people for days if he was angered. Thus, he was named by his mother Goubuli (his nickname "Gou" with "Buli" meaning "ignores"). At 14, Gou was sent by his father to Tianjin where he gained apprenticeship at a food shop and, after mastering his skills, setup his own shop named "Goubuli". Goubuli buns soon become popular with the Tianjin locals.

Ear-Hole Fried Cake (Chinese name, Erduoyan Zhagao, 耳朵眼炸糕) another one of the famous traditional Tianjin snacks. It got its name from the narrow Ear-Hole Street in Tianjin's Beidaguan, where the shop selling it was located. The cake is made of carefully leavened and kneaded glutinous rice dough. The filling is bean paste made with good-qualified red beans. The pastry of the finished cake is golden in color, crisp and crunchy, while the filling is tender and sweet with a lingering flavor.

Guifaxiang Fried Dough Twists (Chinese name: Guifaxiang Mahua, 桂发祥麻花) is a traditional brand of fried dough twist. Although plain in look, this queue-shaped fried dough is by no means easy to make. Each bar of dough is made with quality flour and then fried in peanut oil. Since it can be preserved for several months, you can take some of this crispy specialty back home to share with family.

The above cuisine shoud be missed if you have a chance to visit in this beautiful city. They are highly recommended and you should really havea a try. 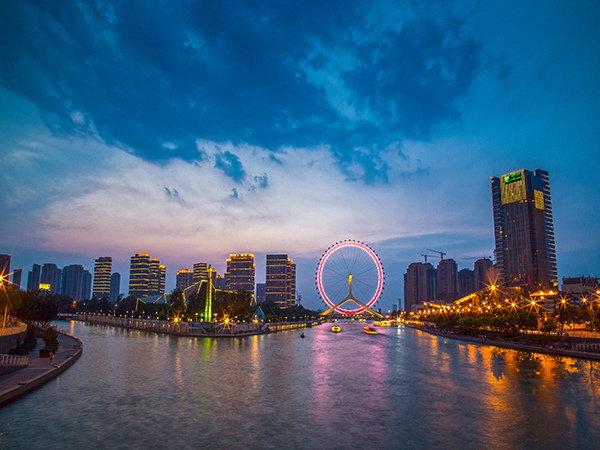