Shanghai, also named 'Hu' or 'Shen' in Chinese, is one of the four municipalities directly under the Chinese central government.

Shanghai, literally known as 'the port on the sea', is one of the world largest seaports and China major industrial as well as commercial center. With the deepening reform, the city, formerly crowned as the financial, economic and trade hub of the Far East, is playing a leading role in boosting economic development of China. Meanwhile, the city has attracted more and more tourists from home and abroad for its unique charm.

Known to the world as the Oriental Pearl, Shanghai is China major gate to the outside world in the east. As early as in the Tang and Song Dynasties, Shanghai served as a foreign trade port and mercantile ties. And during the the Qing Dynasty, the city turned into a navigation hub and metropolis in southeast China, which attracted countless ships to the Huangpu River. Today, this famous International port has developed into China important center of economy, finance, trade, science and technology as well as culture.

As one of the noted historic and cultural citied in the country, Shanghai has more than 70 sites of historical interest and cultural relics, which best represent the distinctive characteristic of Shanghai regional culture. What is more, Shanghai is the Paradise of gourmets, who may find thousands of restaurants here that serve a complete list of China's major famous cuisines and various foreign foods.

Shanghai also received the name of 'Exhibition of the World Architecture', the city has a collection of buildings with different architectural styles along the Bund and elsewhere of the city. The Financial and Trade Building, the International Convention Center and the Oriental Pearl Television Tower in Pudong Area, flanked by the magnificent Nanpu and Yangpu Bridges, which are connected by the city's elevated inner beltway, and the Shanghai Museum, Shanghai Grand Theater on People Square. All these bring the city a brand-new look. 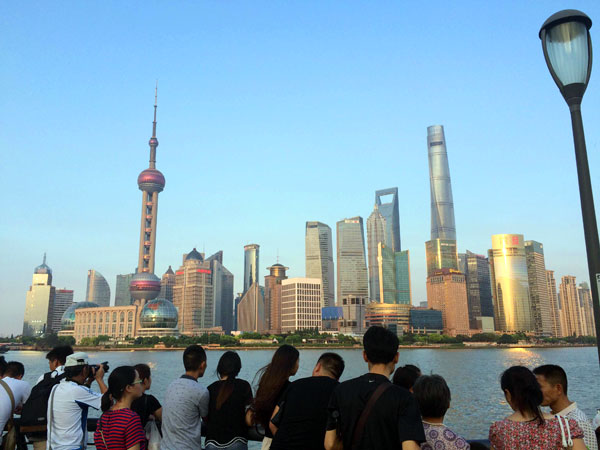 Shanghai lies on China's east coast roughly equidistant from Beijing and Guangzhou. Shanghai are now located in the center of an expanding peninsula between Hangzhou Bay to the south and the Yangtze River Delta to the north, formed by the Yangtze's natural deposition and by modern land reclamation projects. The provincial-level Municipality of Shanghai administers both the eastern area of this peninsula and many of its surrounding islands.

Shanghai is administratively equal to a province and is divided into 17 county-level divisions: 16 districts (including downtown districts and suburban districts) and one county (Chongming County). Even though every district has its own urban core, the real city center is between Bund to the east, Nanjing Rd to the north, Old City Temple and Huaihai Road to the south.

The most basic division of the area is Puxi ("west bank of Huangpu River"), versus Pudong ("east bank of the Huangpu River"). Huangpu River originates from Dianshan Lake in Qingpu District and flows through the downtown. It divides Shanghai into Pudong and Puxi, then flows northwards and finally draws into the Yangtze River via Wusongkou.

The city hall and major administration units are located in Huangpu District, which also serve as a commercial area, including the famous Nanjing Road. Other major commercial areas include Xintiandi and the classy Huaihai Road (previously Avenue Joffre) in Huangpu District and Xujiahui (formerly Romanized as Zikawei or Siccawei, reflecting the Shanghainese pronunciation) in Xuhui District. Many universities in Shanghai are located in residential areas of Yangpu District and Putuo District.

Puxi is governed by eight districts, the older part of urban Shanghai on the west bank of the Huangpu River. These eight districts are collectively referred to as the core city: Huangpu, Xuhui, Changning, Jing'an, Putuo, Zhabei, Hongkou, Yangpu districts.

Pudong, the newer part of urban and suburban Shanghai on the east bank of the Huangpu River, is governed by: Pudong New Area (Chuansha County until 1992, merged with Nanhui District in 2009 and with oversight of the Jiuduansha shoals)

Popular attractions are mostly sited in central districts like Huangpu, Xuhui, Jingan, Changning and some other districts. In Puxi, you can see the Bund, Yuyuan Garden, Shanghai Museum, Nanjing Pedestrian Street, Huaihai Road, etc. Tianzifang and Xintiandi are also nearby. In Pudong, you can enjoy the magnificence of Oriental Pearl TV Tower, Jinmao Building, World Financial Center and opposite Chinese and Western styles of architectures in the Bund, as well as Central Park, Shanghai Science and Technology Museum, Wild-life Zoo Park, and some other entertaining themed parks.

Shanghai belongs to subtropical monsoon climate, with distinctive four seasons, abundant sunshine and rainfall. The climate is mild and humid, with short spring and autumn, long winter and summer.

Shanghai is suitable for traveling all year around. If you must ask for the best time, it would be from March to May in spring & September to October in autumn. In spring, plum flower in Qingpu, canola flower in Fengxian, peach flower in Pudong blooms, truly beautiful. In autumn, not only the weather is cool with less rain, buy also it is the best season to taste crabs in Shanghai.

June-July is the beginning of the rainy season, there are a lot of rainy days; by the end of August - early September is typhoon season, sudden storm often happens. An umbrella is necessary. It is worth noting that the people of Shanghai Family Qingming go around the grave of the season, the traffic around the city will be very tight.

In July and August, temperature is relatively high in Shanghai. A T-shirt and short trousers is enough. January and February is the coldest month, down jacket and thick sweaters are needed to keep warm. In other season, thin coat would be enough.

You can read Shanghai Climate & Weather for further info.

In Shanghai, you will never feel bored. There are various of historical & modern buildings in western and Chinese style, old towns, commercial centers, human heritage and natural landscape for travelers to enjoy their trips.

Spectacular western architecture Bund and skyscrapers in Pudong New Area would be a visual feast for travelers; in Xintiandi, one can find the most beautiful old houses in the city, where you can find the precipitation of history; Hengshan Road bar street is a great place to enjoy your night time; should you prefer creative and article things, 1933 factory warehouse and Creative M50 are must go places, mix of artistic charm of western and Chinese; Nanjing Road, Huaihai Road, Xujiahui commercial city, Yuyuan shopping center are famous shopping centers in the city; finally, do not forget to board the Oriental Pearl Tower, to have a overview of this international metropolis.

The bund - name card of Shanghai. With its rows of Western institutional banks and business buildings, was once the most important financial street in Asia. Although all the buildings that formerly bore major international names have been taken over, mostly by governmental offices, the Bund (Wai Tan in Chinese) still retains its proud atmosphere. The broad boulevard is a museum of turn-of-the-20th-century Western architecture, with stately columns and porticoes. Night view of it should not be missed.

♦ Chenghuangmiao– the representative of Old District of Shanghai. One can see many classic old buildings in Chinese style. Chenghuangmiao Snack Street and Yuyuan Garden is also nearby.

♦ Oriental Pearl Tower - Shanghai's landmark buildings. Visitors can board on the observation deck with 360 ° full transparent overlooking of the city, spectacular. You can also enjoy you meal with fantastic night view in the highest revolving restaurant in Asia in the tower. 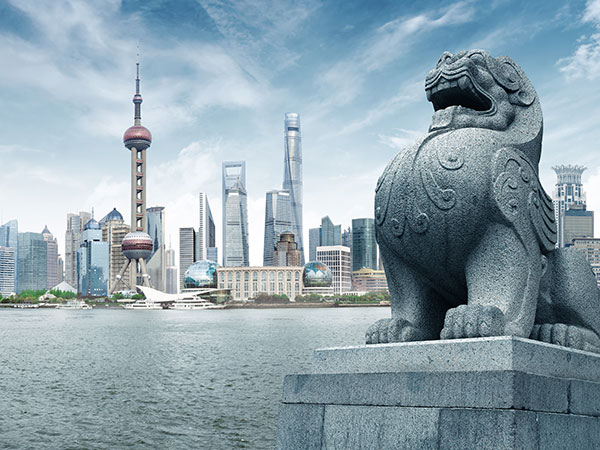 ♦ Yuyuan Garden - near to Chenghuang Temple tourist area. It is a classical Chinese with a history of four hundred years. Although this garden is not big, but its design is exquisite and beautiful, with quiet environment. Pavilions, rockeries, ponds are classic factors.

♦ Jade Buddha Temple - a famous Buddhist temple in Shanghai. These were a sitting Buddha and a smaller reclining Buddha representing Buddha's death. Chamber of Four Heavenly Kings and Grand Hall are highlights in the temple.

As one of transport hub in China, you can almost reach most of important cities of the country from Shanghai by air, train, or coach. Also, Shanghai is one of international departure & arrival city in China. So the transport of it is quite convenient.

Shanghai has two international airports, respectively Pudong International Airport and Hongqiao International Airport, which link Shanghai with most of the domestic and overseas big cities.. The two airports are about 40 kilometers away from each other, located on both side of east & west of the city. Pudong airport is the main international airport and Hongqiao airport is a main base for domestic flights. Both airports have international and domestic flights. You need to confirm which airport will you depart or arrive, in case of missing your flight. If you need to buy transfer flight, make sure they are in the same airport, or you have to usually leave 2 to 3 hours duration to get to the other airport for the transfer.

Shanghai Long-distance Passenger Bus Terminal
There are many direct coaches leaving for cities in Anhui, Jiangsu, Zhejiang Provinces with reasonable prices.
♦ Add: 1666 Zhongxing Road, Zhabei District, Shanghai
♦ Tel: (021)66050000
♦ How to get: take Metro Line 1 or 3 or 4.

Shanghai Long-distance Bus South Station
Most of coaches depart from this station to cities in Anhui, Jiangsu and Zhejiang Provinces. If you are going to those provinces, you can take bus in the station.
♦ Add: 666 Shilong Road, Xuhui District, Shanghai
♦ Tel: (021)962168
♦ How to get: take Metro Line 1 or 3 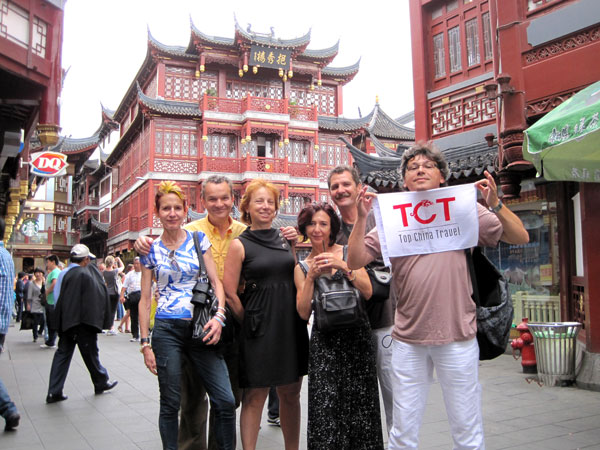