Briefing
Shanghai has a humid subtropical climate and you can experiences four distinct seasons. Winters are chilly and damp, and cold northwesterly winds from Siberia can cause night-time temperatures to drop below freezing, although most years there are only one or two days of snowfall. Summers are hot and humid, with an average of 8.7 days exceeding 35 °C annually; occasional downpours or freak thunderstorms can be expected. The city is also susceptible to typhoons in Summer and the beginning of Autumn, none of which in recent years has caused considerable damage. The most pleasant seasons are Spring, although changeable and often rainy, and Autumn, which is generally sunny and dry. The city averages 4.2 °C in January and 27.9 °C in July, for an annual mean of 16.1 °C. Shanghai experiences on average 1,878 hours of sunshine per year, with the hottest temperature ever recorded at 40.2 °C, and the lowest at −12.1 °C. The average frost-free period is 276 days.
Weather characteristics of the four seasons in Shanghai
* A warm spring
* A hot and humid summer
* A brief and cool autumn
* A damp and cold winter
Most rain falls in Shanghai between April and September in three periods: Spring rain, plum rain, and Autumn rain. The plum rain season is named after the fruit that ripens with its arrival in middle June and early July. When typhoon season comes to Shanghai, it usually lasts from June to October and the storms bring strong winds, heavy rains and storm surges, which sometimes cause flooding in Shanghai downtown areas.
Climate Data Table for Shanghai
Tips for Shanghai Weather
Best time to visit Shanghai:
The best times to visit Shanghai are in Spring and Autumn. The city has a subtropical maritime monsoon climate, with four distinct seasons. Generally, the warm Spring and cool Autumn are the more comfortable seasons. While Summer and Winter are far less pleasant. Overall, Shanghai enjoys a mild and moist climate. 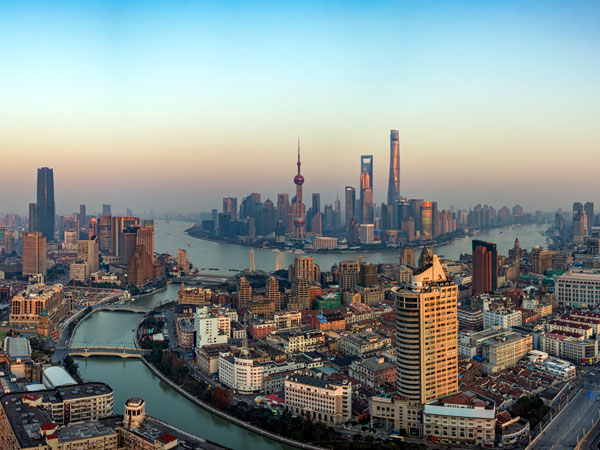 Spring is warm and pleasant. So it is very suitable for a trip or traveling.
Summer in Shanghai is very hot and humid, with July and August having the highest temperatures. Typhoons and sudden heavy rains frequently assail this city during Summer. When traveling in Summer, please prepare umbrellas, which can be used to protect against rain, as well as the strong sunshine on sunny days.
Autumn is one of the best times for visiting Shanghai. The weather is generally sunny and dry. This is also the best time for eating crabs in Shanghai. From late August till early September, weather in Shanghai is frequently influenced by typhoons and rainstorms, but they rarely cause substantial damage. When traveling in Shanghai during these periods, please prepare umbrellas or raincoats.
Winter in Shanghai is characterized by bitingly cold north wind and heavy humidity. Nighttime temperatures often drop well below zero, but it rarely snows. The coldest period is from late January till early February, usually during the Chinese Spring Festival.
Try to Avoid domestic travel seasons
Try to plan your Shanghai tour to avoid the peak holidays. Because they are popular with Chinese tourists, Shanghai attractions become more crowded in these periods.
The most crowded seasons in China are Chinese Spring Festival (usually in late Jan or early Feb.), International Labor Day (May 01 to 03) and National Day (Oct 01-07). Spring Festival and the National Day golden week are the most crowded time for travelling.