Lhasa is the provincial capital of Tibet Autonomous Region. It is an ancient city with a history of over 1300 year. It was also called 'Luosha' or 'Luoxie' before. It is said that Lhasa once was an area of low-lying marsh when Princess Wencheng married Songtsen Gampo. In order to fill in the earth, Princess Wencheng used sheep to deliver dirt to this place. The city was named as Lhasa in 9 century.  It used to be the political, economic, cultural and religious developments of Tibetan Empire. And the Potala Palace, Jakhang Monastery and other architectures were built one by one, which formed Lhasa. 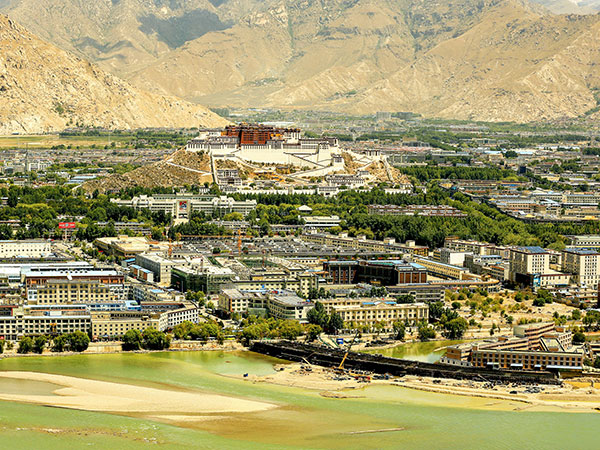 Early History
New Era tribute site is located at the valley, 5 km from the northern suburbs of Lhasa, with a history of 4000-5000 years ago, the site unearthed more than 10,000 pieces of cultural relics and a large number of animal bones, which illustrated that there were human activities since the Neolithic Age.
Tibetan Empire
At early 7th century, Songtsen Gampo unified the tribes of the Tibetan Plateau, set the legal system, and established the powerful force "Tubo" regime, choosing Luosuo (Lhasa) as the capital. Tibet's political, economic, cultural entered a period of prosperity. Jokhang Temple, Potala Palace,  Ramoche, etc. had been constructed one by one.
After the demise of Tibetan Empire, the Tibet region into a long-term war, Lhasa was not the capital.
Yuan, Ming and Qing Dynasties
In the 15th Century, Kadam revitalized. Tsongkhapa rebuilt Jokhang Temple and his disciples built Sera Monastery, Gandan Monastery and Drepung Monastery. Lhasa recovered as the religion center in Tibet.
In Mid-17th Century, the Fifth Dalai unified Tibet region in support of Qing government, and established regime unified the state and the church, and renovated and expanded the Potala Palace. Lhasa’s center statue was further consolidated.
Modern and contemporary
May 23, 1951, the peaceful liberation of Tibet, Lhasa has entered a new era.
September 1, 1965, the Tibet Autonomous Region was formally established, as now the regional capital Lhasa, was ushering in a new development.
In 1982, Lhasa became one of 24 national historical and cultural city of the first batch announced by the State Council.
In 1995, the Potala Palace in Lhasa was officially listed in the "World Heritage List."  And the list of protected historic district included the Potala Palace, Jokhang Temple and Norbulingka,.
On July 1, 2006, the Qinghai-Tibet railway from Golmud to Lhasa section of the Qinghai Tibet was officially opened to traffic.