Lhasa, whose name means 'the Land of Gods' in Tibetan, is the capital of Tibet Autonomous Region. Due to its sufficient sunshine annually, it is also famed as 'the Sunshine City'. It is the center of Tibet's political, economic, cultural and religious activities.
Lhasa is an ancient city with its time-honored 1,300 years' history. It was called 'Luosha' or 'Luoxie' which mean 'dirt-delivering-by-sheep' in the ancient times. There is a story for the name. It is said that Lhasa once was an area of low-lying marsh. In order to fill in the earth, Princess Wencheng from Tang Court used sheep to deliver dirt after her arrived at the place. Lhasa became the city's name in 9 century. As the political, economic, cultural and religious developments of Turpan Region, Potala Palace, Jakhang Monastery and so on were built one by one, which formed Lhasa's old downtown.
All pervaded sacred religious atmosphere mixed with leisure, happiness and the smell of sunshine, Lhasa has been the destination of travel the beginning of lives for many people. 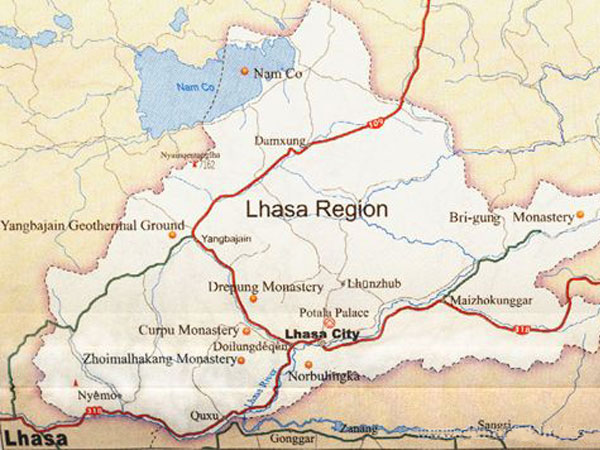 Administrative Division: Lhasa is a prefecture-level city that consists of one district and seven counties. Chengguan District is the main urban area of Lhasa. The mayor and vice-mayor of Lhasa are Doje Cezhug and Jigme Namgyal, respectively.

Population: Lhasa has a population of more than 0.4 million of different ethnic groups such as Tibetan, Hui, and Han. And 14 thousand people live in the downtown city.
Geography

Lhasa prefecture-level city covers an area of close to 30,000 km2 (12,000 sq mi). It has a central area of 544 km2 and a total population of 500,000; 250,000 of its people live in the urban area. Lhasa is home to the Tibetan, Han, and Hui peoples, as well as several other ethnic groups, but overall the Tibetan ethnic group makes up a majority of the total population.
Located at the bottom of a small basin surrounded by the Himalaya Mountains, Lhasa has an elevation of about 3,600 m and lies in the centre of the Tibetan Plateau with the surrounding mountains rising to 5,500 m (18,000 ft). The air only contains 68% of the oxygen compared to sea level. The Kyi River (or Kyi Chu), a tributary of the Yarlung Zangbo River), runs through the city. This river, known to local Tibetans as the "merry blue waves,", flows through the snow-covered peaks and gullies of the Nyainqêntanglha mountains, extending 315 km (196 mi), and emptying into the Yarlung Zangbo River at Qüxü, forms an area of great scenic beauty.

Culture
The Potala Palace and the Barkhor Street centered in Lhasa city, north to the Sera Monastery, west to Duilong Deqing county. Viewed from the overlooking the Lhasa city, Post and Telecommunications Building, News Building, Lhasa Hotel, Tibet Hotel and various buildings dotted. Standing on top of the Potala Palace to overlook the Lhasa city, the Lhasa city is full of pieces of new building hidden in the trees, and Barkhor Street surrounding has waving prayer flag. Here densely covered a national style of houses and streets, gathered from all over the Tibetan people, and many of them are still in Tibet traditional clothing. It seems that prayer wheel and prayer beads never leave their hands which clearly show that Buddhism has become a way of life in fact.
Festival
There are many festivals in Tibet Autonomous Region. From the beginning to the end of the year, there are over twenty festivals of a year. The festivals are the period for people to get together, dancing and singing. Traditional festivals mostly have relationship with religion, and now the festivals also celebrated for folk-custom and entertainment. The most famous Tibet Festivals are Tibetan New Year, Butter Lamp Festival, Great Prayer Festival, Saga Dawa, Shoton Festival, Horse Racing Festival, Bathing Festival, Onkor/Harvest Festival and so on. If you want to know more about festival, you can visit to the link Tibet Festival.
Climate

Lhasa features a cold steppe climate (Koppen Bsk). Due to its very high altitude, Lhasa has a cool, dry climate with frosty winters. It enjoys nearly 3,000 hours of sunlight annually and is thus sometimes called the "sunlit city" by Tibetans.

Lhasa has an annual precipitation of 426 millimetres (16.8 in) with rain falling mainly in July, August and September. The rainy season is widely regarded the "best" of the year as rains come mostly at night and Lhasa is sunny during the daytime.

• Best Time to Visit
♦ Spring (March to May):
Spring in Lhasa is lack of boisterous atmosphere, of course, if you can catch the Saga Dawa Festival at end of May to early June is another matter. At that time almost all of the people in Lhasa are gathered to 3 circumambulation road. Generally speaking, the May Day is the beginning of the travel season, but at that time due to the snow mountain, you may not go to the famous "heavenly lake" Namtso Lake. Spring is mutual exchange of time of windy season and the rainy season in Lhasa, when is the most suitable time for mountaineering, and there are peak in local for exploration for beginner, so it is a pity that do not have a try.
♦ Summer (June to August):
Summer in Lhasa is warm and humid; summer is the best season for travel. This time is also the time that Lhasa nature is the most enjoyable of the year, the whole city is lush, but in winter is bleak which forms a bright contrast. There’s a saying that in Lhasa in the summer the oxygen concentration can reach almost twice as much as winter.
♦ Autumn (September to October):
A lot of people think that autumn is the most beautiful season in Lhasa, the scenery just on the way to Lhasa airport is amazing. Although this time is the rainy season, but most of time it rains at night and it has been clear up when people wake up early in the morning, so it does not affect the schedule. On July 1 in Tibetan calendar (August in Gregorian calendar) is Tibetan Shoton Festival in Lhasa, at that time people can not only appreciate the Tibetan opera performance, but also have the opportunity to visit Drepung showing Buddha painting and see the brilliant spectacular scene.
♦ Winter (November to next February):
Temperature gap in Lhasa between day and night in winter is large. Though under strong sunlight it is warmer during the day, at night while the temperature is low, the house do not have to make a fire or heating and it is barely acceptable. Even if traveling Tibet in the winter is a very pleasant thing. In addition to enjoy hot spring and overlook snow mountain, people still have a chance to see the beauty of enveloping snow.
• Dressing Tips

♦ Spring (March to May):
Tibet's spring generally is windy, so can't wear too little. From November to March and April of next year, the weather characteristic is windy, in general sense, this period of time can also be known as the windy season. In the spring, Tibet is not as warm as China mainland especially in the southern region. In the aspect of thickness, it is advisable to bring with a thin sweater and coat for upper body, and with long johns and trousers for the lower part of the body. (If you want to go to Mount Everest, Namtso, Ali, etc, it is advisable to take down jacket)
♦ Summer (June -August):
Compared with the spring, summer in Tibet has the characteristics of more rains while the spring season is windy and of course, most of rains happen at night. So the clothing, on the one hand, people need to prevent from sunburns; on the other hand, people should guard against the rain. When the sun is out, if you wear less, you will be tanned and sunburned; during rainy days, when the sun disappears, if you wear less you will feel cold. So it is suggested that wearing mauntaineering jacket (rain-proof), sports pants and trousers. But if going to the Mount Everest, and Namtso, accommodation condition is more humble. And because in the morning the temperature is low, people who are afraid he or she will catch a cold, suggest taking a thick sweater.
♦ Autumn (September to October):
This time travel to Tibet can be said to be the best time to travel, one is the season in July and August are often traditional Tibetan festival Shoton Festival; second the rainy season will pass (July and August is the well-known rainy season in Tibet, and at the end of August and early September rainy season gradually pass), and this time is a brilliant autumn, the weather is not cold nor hot. So just like wearing as in summer, and climate and weather is more comfortable than in summer. What need reminds is, at this time, must take long johns known as knitted trousers.
♦ Winter (November to February):
The winter in Tibet is a little warmer than the north mainland of China, but many colder than southern China. In here you need to put on down jacket, indoors can wear sweaters. If one day the weather is very good, sweater and coat is enough.
Tourism
There are many archaeological sites in Lhasa, Potala Palace, Jokhang Temple and Norbulingka is listed as world cultural heritage. The main tourist attractions are Drepung Monastery, Sera Monastery and Ramoche Monastery, etc. The main commercial districts are Barkor Street, Yutuo Road and Lhasa Department Store. And there are geothermal hot springs around the land that have economic value and medical treatment, like Duilong Deqing county Qusang hot springs, Maizhokunggar county Dezhong hot springs.
• Best Places to Visit
♦ Potala Palace –Originally built by King Songtsen Gampo in the seventh century, Potala Palace is located on the Red Hill of Lhasa. The awe-inspiring Potala Palace, perched high above much of Lhasa, which the elevation is 3767.19 meters, is also the highest ancient palace in the world. There are a total of 900 stone steps from the bottom of the entrance to the top. Potala Palace is composed of red palace and the white palace of two parts, the red palace is in the center while the white palace is in the two sides, which is a magnificent architecture gathers grand palaces, complicated constructions, devotional atmosphere and splendid artworks

♦ Jokhang Temple –Jokhang Temple was built in the seventh century, the prosperous period of the Tubo dynasty and it is the most brilliant existing Tibetan architecture during Tubo period, is also Tibet's oldest civil structure construction. Jokhang Temple is a blend of architectural style of Tang, Nepal, India, and become eternal masterpiece of Tibetan religious architecture.

♦ Norbulingka–Norbulingka is located in the western suburbs of Lhasa, Tibet, was built in the 18th century, it borrowed architectural style from the inland areas of China while maintaining local ethnic and religious features. Norbulingka served as a traditional summer palace and residence starting with the 7th Dalai Lama, and now it is the largest garden in Tibet. There are 374 rooms, is the largest, best scenery of Tibet artificial gardens and the most historical and gardens.
♦ Namtso Lake –Namtso Lake elevation 4718 meters, 70 km long, north and south 30 kilometers wide, is the largest lake in Tibet, China's second largest salt water lake, is also the world's highest lake. Namtso Lake is big with the lush water plants, is the natural ranch that can graze. Whenever the early summer, groups of wild ducks come perch and raise up seed. Wild yaks and many other wild animals also often appear here.
Shopping
Tibet has many arts and crafts products full of local flavor and national style, all kinds of Tibetan traditional handicraft products such as wooden bowl, bamboo bowl; and also imitations made in batch processing by Nepal, India and other countries businessman, such as various kinds of bone carving animals. Tourists can buy a lot of goods in Tibet, the famous are like Thangka, Tibetan knife, Tibetan mask, as well as Tibetan medicine and tonic, cordyceps sinensis, saffron, tricholoma matsutake, and so on.
Transportation