Zhaoxing is not only the hometown of the drum tower, and it is the hometown of song and dance. There is Dong song team and Dong’s play troupe in Dong village. During festivals or guests coming, Dong people gathered in the drum tower, singing ground to held national cultural activities. Song is particularly famous for its various songs, like cicada song, stepping song hall, road song, Qin brackets song, toasting song, love songs, folk songs, river song, narrative songs, children's songs, and so on. Every year the Mid-Autumn festival will hold a Lusheng event, which is very busy, very spectacular. During the first lunar month (usually February),the early festival in Kaili (east of Guiyang) celebrates local culture with acts of bullfighting, horse racing, pipe playing and comedy works.

Huoye
Zhaoxing Dong Village has deep Dong culture, original Dong feelings of primitive simplicity. During the festival, the hospitable Dong people have an activity call “guoye”. This is a big social event between village and village, people from A village go to B village to be a guest, and when the guest coming into village, main village girls already set up the stool in front of the village to bar road and sing the road song. Guests sing to Dong people as reply, after several rounds, and drink the road liquoar, hosts will let the guests come into the village. Men in the village are blowing Lusheng, setting off firecrackers, beating drums greeting the guests inside the drum tower of stockaded village. People gather around the drum tower song ground, stepping up the song hall, helding a grand ceremony of worship grandmother "Sasui". Two villagers, under the guidance of the young men and women in the village of old people circle the village. And then in the song of Lusheng enter into song ground, formed a circle that men are outside the women are inside, hand in hand, dance while singing.
Dong Play
People in Zhaoxing are so good in singing and dancing since the ancient times, everybody there is fond of singing whenever during labor or leisure time. Dong Play is the necessary event for Zhaoxing tourism. Usually the performance venue is at the drum tower of stage. In performance Dong actor dress dong costumes, perform song and dance in the way of talking and singing in Dong words.

Zhaoxing has the world's largest Dong Village drum tower group. Drum tower is the unique Dong culture symbol which is multilayer pagoda wooden buildings, used for Dong village meetings and recreational activities. The Flower Bridge and stage is the entertainment facilities for Drum Tower which are built together. Usually a drum tower will equip with a flower bridge and stage. Flowers Bridge has corridor which is very convenient for Dong people to pass through the river and offer a good place for them to rest and enjoy the cool after farm work. The stage is a type of the stilted building used for performing Dong play.

There are many professional Dong art troupe performances in Zhaoxing, the performance will stars at 20:00 every night, tickets for 50 yuan/person. Main content are male and female mixed chorus Dong song, Dong nationality song and dance, Dong love songs, dong clothing exhibition, etc. Art Troupe can also customize performances according to request of guest.
Bar
After visiting the natural scenery, national customs of Dong during day, tourists can go to the bar to relax at night. There are a lot of good local bars. 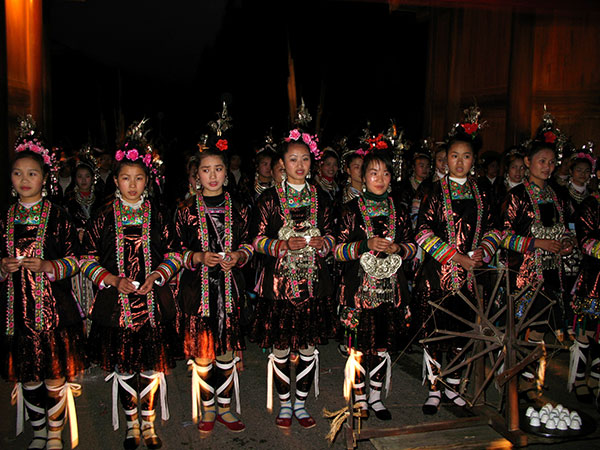 ► Meaning
Clay Figurine Festival is held after the harvest season, therefore it has the meaning of celebrate the harvest, but its cultural connotation not only is harvest. People here play mud to express people worship of the earth, to show the great love of the deep feeling of human land. And it is the ethnic artistic way of land worship by Dong people.
► Content
The guests go to the village, setting off firecrackers, blowing Lusheng. Village people blow Lusheng song welcome for guests, people line in two rows respectively welcome guests.Youth of village bar road and sing the road song to welcome guests. After singing road song, villager line up to welcome guests to the stockade and then lead to four drum tower respectively. After taking seat in the drum tower, three to five hosts invite guests their home.
After lunch, the Clay Figurine Festival officially starts. Activities are divided into two parts, activity in mud and in land and the most prominent part is in the mud.

Mud activity process is fascinating, site is located in the village of a big fish ponds. Early in the morning, people of the village drain the water off the pond and make it become seventy to eighty percent dry, and then it is advisable to stir into mud. With activity start, the naked young men and women flock in the pond. The first game is catching fish, each one catch a fish then put it upon the head and make a strange action to show off. Other people in a variety of ways to chase, the movement in the mud is funny, often burst people’s sides with laughter along the fishponds.

Land activities are mainly in the Drum Tower Song Ground, they are Lusheng competition in the day, Dong songs and Dong play in the evening, sometimes overnight. These all belong to the celebration to “God Doma”.