Situated in South China, Guilin is like a glittering pearl on a green carpet, the scenery here enjoys the praise of "top landscape in the world". The name of the city is derived from the cassia tree called "Guihuashu" in Chinese. One can see the green cassia trees standing at the most roadsides in the town. When the autumn comes, the fragrance of the blossom fills up the air making passengers refreshing and relaxed. In addition, the golden flowers are very pleasing to the eyes.
Guilin is a world-famous scenic city, famous for its unrivalled karst landscape, exquisite mountains, limpid rivers, wired caves and beautiful rocks. Besides the unparallel scenery, the city also boasts its time-honored history. Guilin has been the political, economic and cultural center of Guangxi since more than 1,000 years ago. The Lingqu Canal built 214 B.C. in Xing'an County has witnessed the change during these 2,000 years.


Guilin has a history of more than 2,000 years. In the 6th year of Yuanding During the reign of Emperor Wu of the Han Dynasty (111B.C.), Guilin was a county, called Shi An County, and from the Song Dynasty to the Qing Dynasty, it was the political, economic and cultural centre of Guangxi. In 1921, the North Expeditionary Army led by Dr. Sun Yat-sen joined forces in Guilin, and the headquarters was sited in the Royal Palace at the foot of the Solitary Beauty Peak. The city acquired its present name in the year of 1940.

Guilin is a well-developed tourist center with convenient transportation, communication and accommodation facilities. You can enter Guilin by air, by train or by bus and get around on free buses. From luxury hotels to cheap hostels, from splendid restaurants to local snacks, you are sure to find that your needs will be met beyond your expectations.

As one of the majority cities in Guangxi Zhuang Autonomous Region, Guilin is the home to more than 10 ethnic groups, such as Han, Zhuang, Miao, Yao , Hui and Dong.

Administrative Division: From the administrative perspective, Guilin can be divided into five city districts, ten counties and two autonomous counties

Population: Guilin is a compact community by scores of minority nationalities. The population from 28 ethic nationalities such as the Zhuang, Miao, Yao, and Dong accounts for 8.5% of the total population in Guilin. 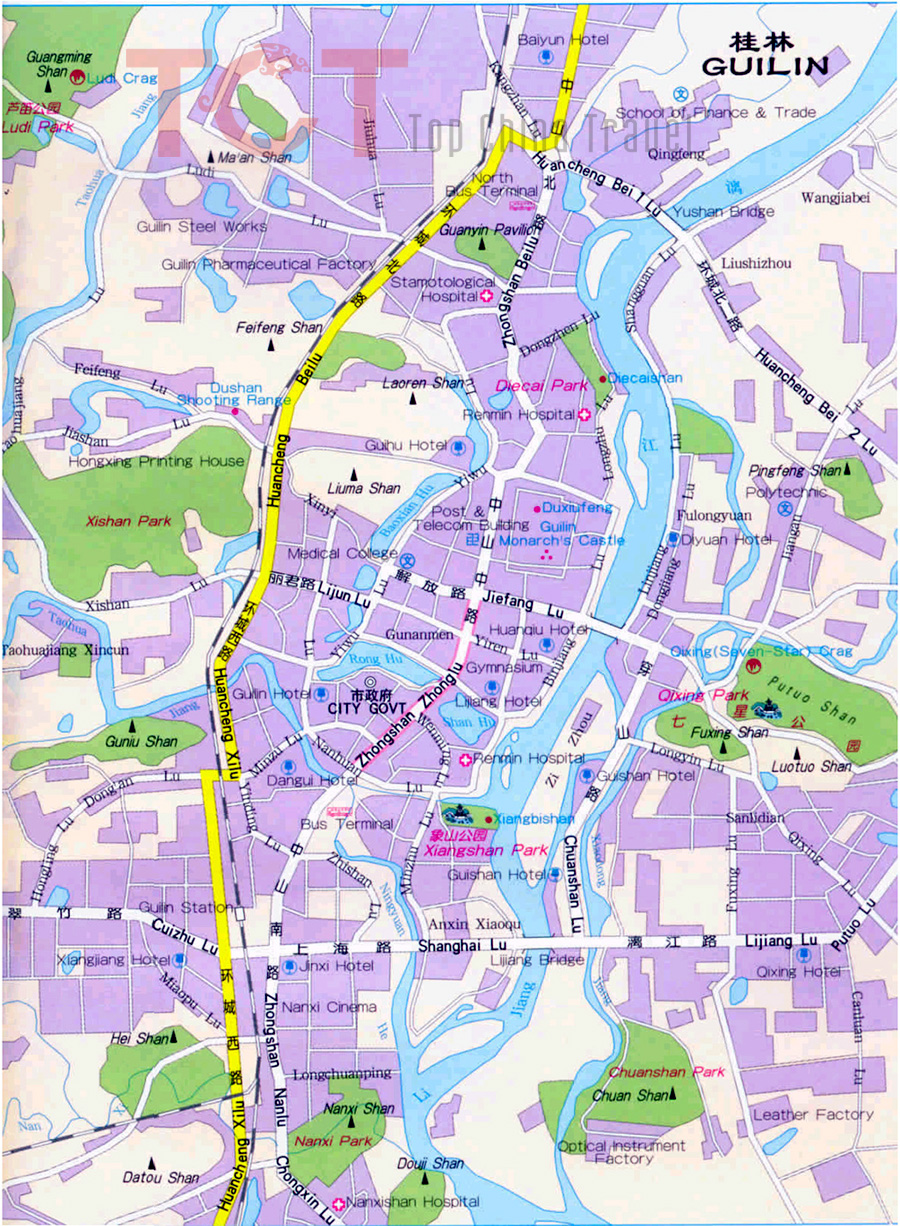 Guilin is located 109°E longitude and 24° N latitude in the northeast of Guangxi Zhuang Autonomous Region, a city with typical karst landform area. The Guilin Government covers an area of 4,195 square kilometers. It is in a basin surrounded by the Yuecheng Range, Ocean Hill, Jiaqiao Range and Tianping Hill. Guilin is located almost due west of Hong Kong and about 1 hour fight.

Guilin lies in the northeast of Guangxi Province. The weather in this region is normally under the control of the tropical monsoon, which is considered to be of seasons distinct, pleasant temperature, and abundant rainfall. The native people describe the climate with this proverb "Scarcely snowing in winter, perennially flowers blossoming".

Traveling to Guilin, the best season in April to October in a year, during this time there will be October 1st National Day golden week, which is also a tourism peak season. The climate is suitable in Guilin so there will be a lot of tourists, the room reservation and transport is also in full swing, prices rose at ordinary times, so it's best to avoid this time and select a off-season to travel, and experience the beauty of Guilin.

♦ Spring (March to May): When the north of China still is covered with a thick layer of snow in the early spring, Guilin has already become green. And it is flower season and is the perfect time for outdoor activities. In March, the average temperature is 13 degree, and sometime there are rains at night.
♦ Summer (June to August): Summer is the rainy season in Guilin, precipitation in this time accounts for more than one half of the total precipitation of the year. Therefore, traveling during this time, tourists should pay attention to bring umbrella. Though rain brings some inconvenience to tourists, it creates a hazy poetic imagery. Through the misty rain to see landscape of Guilin, tourists will have a feeling of fairyland.
♦ Autumn (September to October) is perfect time to travel to Guilin. At that time, the air is fresh and the wave is smooth as glass when is the best time to see the reflection of mountains and peaks.
♦ Winter (November to next February): the lowest temperature of Guilin is around 8 degree which makes people cold but it is not as braving freezing temperature as northern China. October of early winter, the average temperature is around 20 degree, and it is the season of sweet-scented osmanthus, different kinds of osmanthus decorated Guilin as a flower city and its fragrance spread all over the city. Owing to the climate, it is hard to see snow in Guilin.

♦ Spring (March to May): temperature is moderate, but it is a little cool with rains. A thin coat is enough.
♦ Summer (June -August): temperature in summer is usually above 30 degrees, with strong sunshine. Sun protection is necessary, such as sunglasses, hats, umbrellas, etc. T-shirts with skirts, shorts or slacks are the best choice for summer when the temperature can be rather high. Summer is the rainy season, especially in May and June.
♦ Autumn (September to October): autumn is windy and cool. Temperature difference is a little large. So a thick coat is necessary.
♦ Winter (November to February): the lowest temperature in winter can be between 5-20 degrees. Winter is cold and moist, especially in January, but can still be very pleasant when the sun is out. So coats are a must. Girls should put long boots on.

Guilin has the reputation of "the scenery of Guilin is the finest under the heaven", is our country key scenic city and garden city, and was named the first batch of historical and cultural city of the state council. In 2003, the World Tourism Organization listed Beijing, Shanghai, Xi'an and Guilin as the best tourism city of China.

♦ Li River – Located in the eastern part of the Guangxi Zhuang Autonomous Region in southern China, it belongs to the Pearl River water system. The Li River originates Mountain Mao’er at Xing'an County in the northeast of Guilin. Mao’er Mountain is a place of excellent ecological environment that has luxuriant vegetation and the fresh air. It winds and meanders its way for 170 kilometers, passing through Guilin, Yangshuo to the outlet of Gongchen River in Pingle County. Li River, according to its different scenes, may be divided into three sections: Guilin to Ox Gorge, Ox Gorge to Water-Dropping Village, and Water-Dropping Village to Yangshuo.

♦ Elephant Trunk Hill –Guilin Elephant Trunk Hill, also known as the elephant hill, lies on the junction of the Li River and the Peach Blossom River. It is the famous landmark of Guilin city. The whole hill looks exactly like a huge elephant stretching its trunk drinking water of the Li River. It is the masterpiece of karst landscape, composed of pure limestone deposited on seabed 360million years ago.

♦ Reed Flute Cave – It is 5 kilometers away from the centre of the city and lies in the northwest of Guilin. It is a famous attraction which mainly providing a magic fairyland of stalagmites, stone columns, curtains, stalactites and flowers in varied amazing shapes and colors while appreciating landscape and rural scenery.

Guilin is a well-developed tourist center. When you visit to Guilin, you can buy some local specialties as gifts for friends and family. There are a lot of places for shopping and various items to buy as souvenirs. The main shopping districts include Zhengyang Pedestrian Street, Xicheng Road Pedestrian, Zhongshan Road Business District, and Yanghsuo West Street, etc.

Sanhua Liquor, Chili Sauce and Fermented Bean Curd are three treasures of Guilin, and they are also the representatives local specialties of Guilin. Besides, there are other specialties like weaven grass craft, paper umbrella, bamboo and wooden carvings, etc.

There are one airport in Guilin—Guilin Liangjiang International Airport.