The Great Wall of the Northern and Southern Dynasties

History of the Northern and Southern Dynasties

The Great Wall of the Northern and Southern Dynasties was also built for defense. The walls in this period were mainly built by the Northern Dynasties. During the Late Han Dynasty, uprisings led by peasants never stopped. In the uprising wave, the Yellow Turbans Rebellion reached the climax. Though failed, it accelerated the collapse of the Han Dynasty.

The Han Dynasty gradually subtitled by the three Kingdoms- Wei, Shu and Wu, and this period was well-known as the Three Kingdoms Period (208-280). After years of fighting with each other, Wei finally defeated the other two kingdoms. Later Wei had a series conflicts with Jin. And in 316, King Jin Min Di surrendered to Liuyao, the descendant of the Northern Hun, marking the end of the Western Jin Dynasty. (265-316).

In 317, Sima Rui was supported by Landholders and he asserted himself the King of Jin, and in318, he became the real King—King Jin Yuandi. And this is the beginning of the Eastern Jin Dynasty.In 420, Prince Song Liu Yu Dethroned the King of the Jin Dynasty and founded the Song Dynasty.While in 386, an ethnic group Tuoba from Xianbei founded the Wei Dynasty. In 439, the King Wei Taiwu unified the north China. Hence the North Wei and South Song coexisted. And this announced the beginning of the Southern and Northern Dynasties. One and a half centuries later, the North Wei was divided into Western Wei and Eastern Wei. In 55o, Gao Yang defeat the Eastern Wei and founded the Northern Qi, While in 557, Yuwenjue Overturned the Westren Wi and established the Northern Zhou. The Southern and Northern Dynasties lasted for 169 years from 420 to 589. During these dynasties, only the Northern Dynasties constructed their defending walls. 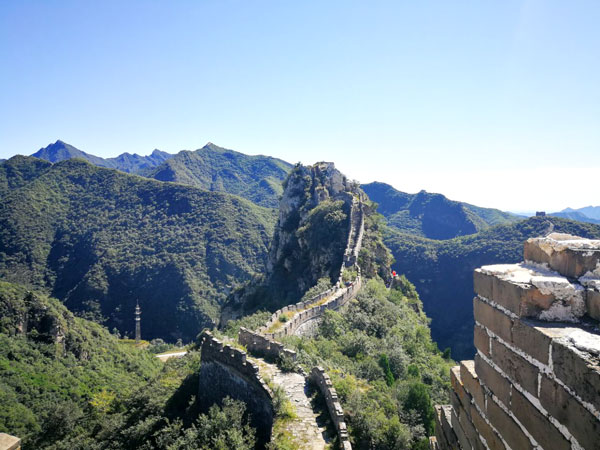 The Wall of the Northern Wei Dynasty

Wei was founded by Tuoba Gui in 386. Later in 389, he chose Pingcheng to be the capital, present Datong city of Shanxi Province. In 390, he asserted himself the King and soon established Nortern Wei Dynasty. The state Rouran at the north border of its territory became a powerful enemy of Wei, when King Ming Yuan Di ascended the throne in 409.

In order to prevent the invasion of Rouran, King Ming Yuan Di ordered to built fortresses and a 1,000 kilometers’ wall along the north border of Wei. This wall extended from present Chicheng County in Hebei Province via the north edge of Shanxi Province to Wuyuan County in Inner Mongolia. It was the best of the military power of Wei, when King Tai Wu Di got the throne. He defeated Rouran and unified the whole region around the Yellow river by a series of wars. To protect the capital, he set up six military towns. They are Fuming, Wuchuan, Rouxuan, Yuyi and Huaishuo. To enhance the defense, he ordered to built another thinner an lower wall which extended over 500 km running from now Guangling of Shanxi Province via The border between Hebei and Shangxi Province to Tianzhen County of Shanxi, winding westwards and finally got to the east banke of the Yellow River though Datong.

The Wall of the Eastern Wei Dynasty

Built in 543, the wall extended about 75km, going from present Jinle County to Chunyang County in Shanxi Province.

The Wall of the Northern Qi Dynasty

The later King Wen Xuan Di overturned the Eastern Wei, and established Northern Qi in 550. He then adopted strict ruling measures in his kingdom. On the other hand, he streamlined his armies and defeated his northern enemies: Rouran, Tujue and Qidan.To enhance the defense on north border and protect Wei from the Northern Zhou, the Northern Qi Dynasity spent about 30 years to build walls. The scales of the walls could be comparable to that of Qin Dynasty. The following is about each section of the walls.

In 552, the wall on the northwest was built. It extended from now northewest Lishi County to west Shouxian County of Shanxi Province, running about 200 km.

In 555, the section of wall left by Northern Wei Dynasty on the north border was rebuilt because it was in poor condition. The wall extended about 450km form now Nankou County to Datong of Shanxi Province.

In 556, Northern Qi built another wall which ran eastward for about 1,500 km to the Shanhaiguan Pass and reached the seashore. This wall was the longest one since the Qin and Han Dynasty.

In 557, a wall ran eastward about 200km was built as a second defense line to the southern wall which had already existed. The wall gone from now Laoying Village of Pianuan County in Shanxi Province via Yanmenguan Pass and Pinxingguan Pass and reaching Xiaguan Village of Shanxi.

In 563, a wall started form the junction of Shangxi and Hebei Province and extended along the range of Taihangshan Mountain was built by King Wu Cheng Di. The wall ran about 100 km with 12 military posts.

In 565, Northern Qi repaired the inner wall built in 557 which was ruin by the state of Tujune in 563 and renovated the wall built by the Eastern Wei Dynasty. The wall was prolonged to the Yanmenguan Pass.

The Wall of the Northern Zhou Dynasty

In 557, King Xiao Min Di overthrew the Western Wei Dynasty and founded Northern Zhou. In the time of King Zhou Wu Di, the Northern Qi unified the northern China and began to invade the north border of Northern Zhou. So in 579, King Zhou Jing Di thoroughly repaired the walls which were built in Northern Qi Dynasty.