The Great Wall of the Jin Dynasty

After the collapse of the short-lived Sui, the glorious Tang Dynasty was established (618-907). In Tang Dynasty, economy and culture are very prosperous and there were little or no treat from its neighbors in the border, so there were deemed necessary for the ruler to construct additional fortifications. After the Tang Dynasty came the Song Dynasty (960-1279. The Song Dynasty had treat from its neighbors, the Liao (907-1125), Western Xia (1032-1227) and Jin (1115-1234), but it did not build any fortification walls. In 908, a section of wall was built on the Nanguanling Town of Liaoning Provine by the Liao Dynasty according to the history records.  In 1026, the nomad nationality, Nuzhen, occupied the territory to the northeast China and constructed several beacon towers and fortresses for defense. These fortresses and beacon towers finally became part of the defense system of the Great Wall. In this period, the Great Wall extended south from present Bai Cheng Village in Heilongjiang Province and reached the Nongan County of Jilin Province. 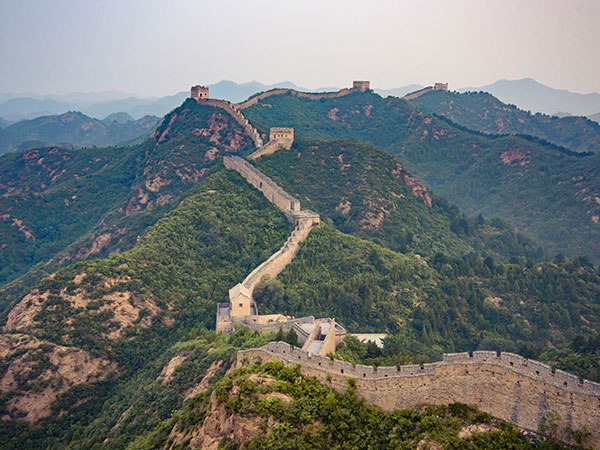 The Great Wall of Jin Dynasty

In 1115, the nomad nationality, Nuzhen, founded the Jin Dynasty. To prevent invasion from its neighbors, the Mongols, Jin organized a large scale construction program of the Great WALL. The Great Wall of Jin Dynasty is not the same as those previous walls. It consist digging ditches. In some sections, ditches and subsidiary walls were built to enhance the defensive function. The construction program started in about 1123, lasting about 75year, and finally completed by about 1198. There were 2 important sections of the Great wall according to history record, which are known as the Mingchang Old Great Wall and the Mingchang New Great Wall.

This section is also called the Border Fortress of the Jin Dynasty. It is near present Heilongjiang River of the Xing’an Mountain of Heilongjiang Province, stretching about 500km.

This section is also called the Inner Wall of Jin. It was also built to prevent invasion from the Mongols. The whole wall extended about 1,500 km, runing from Hetao area of Inner Mongolia at the west, via Shaanxi Province, Shanxi Province, Hebei Province, Inner Mongolia Autonomous Region, Liaoning Province and Heilongjiang Province and reaching the Songhua River of Heilongjiang Province. Today, you still can found the site of the Great Wall in Xilinhuate City of Xilin Gol League of Inner Mongolia Autonomous Region.
As in the later Yuan Dynasty, there was no need to construct the defenses on the border, because the territory of Yuan almost spanned parts of both Asia and Europe. The new era of the Great Wall construction was in the followed Ming Dynasty. And the Great Wall of China as it exists today was built mainly in the Ming Dynasty.