Luoyang Bridge, original named Wangan Bridge, is the earliest sea-crossing girder-type stone bridge extant in China. It lies over the Luoyang River, which divides Quanzhou City and Hui'an County 10 kilometers east of Quanzhou City in Fujian Province. The bridge was first built by Caixiang, a prefecture chief of Quanzhou city during the Song Dynasty, in 1053. The original bridge was over 1,200 meters long and five meters wide, with 46 piers, 500 railings, 28 stone lions, seven pavilions and nine stone pagodas. This great bridge was very famous at that time. Later, the bridge was repaired for 17 times. The existing bridge now is 731.29 m long, 7.3 m high and 4.5m wide with 44 piers, 645 railings, 104 stone lions, 1 pavillions and 7 stone pagodas.

Anji Bridge or Zhaozhou Bridge is a symbol of Shijiazhuang City. Built in Sui Dynasty, designed by the famous architect Li Chun, Anji Bridge is the earliest and the most well-preserved stone arch bridge at present. And because of its historical significance, Anji Bridge was in the list of national important cultural relics. The Anji Bridge is about 50 m long with a central span of 37.37 m. It stands 7.3 m tall and has a width of 9 m. The arch covers a circular segment less than half of a semicircle (84°) and with a radius of 27.27 m, has a rise-to-span ratio of approximately 0.197 (7.3 to 37 m). This is considerably smaller than the rise-to-span ratio of 0.5 of a semicircular arch bridge and slightly smaller than the rise-to-span ratio of 0.207 of a quarter circles. The arch length to span ratio is 1.1, less than the arch-to-span ratio of 1.57 of a semicircle arch bridge by 43%, thus the saving in material is about 40%, making the bridge lighter in weight. The elevation of the arch is about 45°, which subjects the abutments of the bridge to downward force and sideways force. Li Chun's innovative spandrel-arch construction, while economising in materials, was also of considerable aesthetic merit. An inscription left on the bridge by Tang Dynasty officials seventy years after its construction reads: 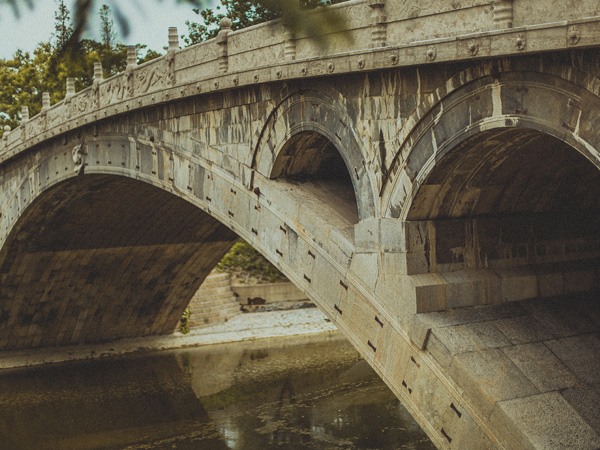 Guangzi Bridge, also known as Xiangze Bridge, is located at east urban of Chaozhou City in Guangdong Province. It is on a key post for the transportation between Fujian and Guangxi lying on the Han River. Famous bridge export Mao Yishen reputed it as the first opening bridge in the World. The Bridge was first built by Zengwang, a prefecture chief in the Song Dynasty, in 1171. It was originally a floating bridgewith the length of 518 meters, named Kangji. In 1174, the bridge was destroyed by floods. Later construction of piers and framework started from both banks of the river on which it was moored. After 200 years renovation, a floating section of 18 supporting wooden boats in between two beamed sections was completed, just as described in the folk rhyme: "Chaozhou has an attractive bridge supported by 18 boats and 24 piers. Guangzi Bridge is a perfect combination of the architectural style of beam bridge, arch bridge and floating bridge. There are 24 pavilions were built on the piers of the bridge which was also used as shores.

Bridge, also known Macro Polo Bridge, lies on the Yongding River, 15 km from Beijing. Yongding River was also known as Lugou River, hence the name of the bridge. It is the earliest segmented stone arch bridge extant in Beijing. The bridge is 266.5m long, 7.5m wide with 10 piers and 11 arches. The Bridge was first built in 1189 in Jin Dynasty and renovated in Ming Dynasty. In 1697 during the Qing Dynasty, the bridge was destroyed by floods and rebuilt in 1698. There was no water in the Yongding River, but in 2008, for the reason of holding Olympic Games, the river full stored with water again. Bridge became famous in the world because of the Japanese attack on the bridge in 1937, the start of Japan's invasion of China. 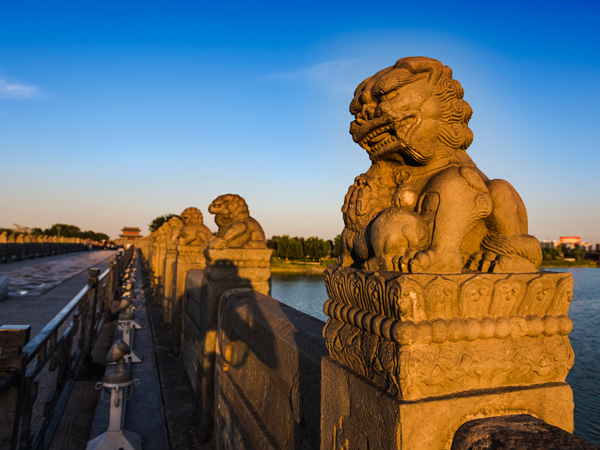