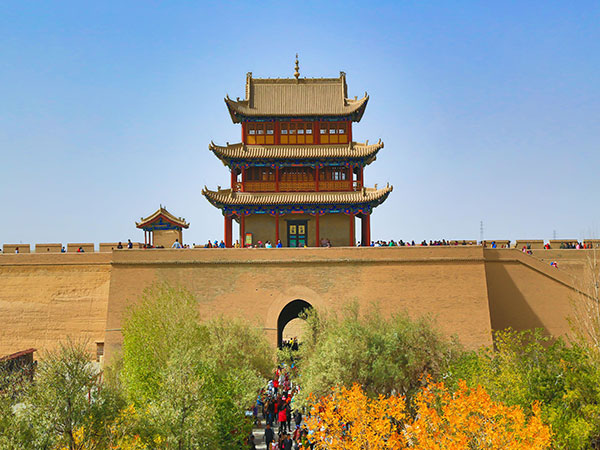 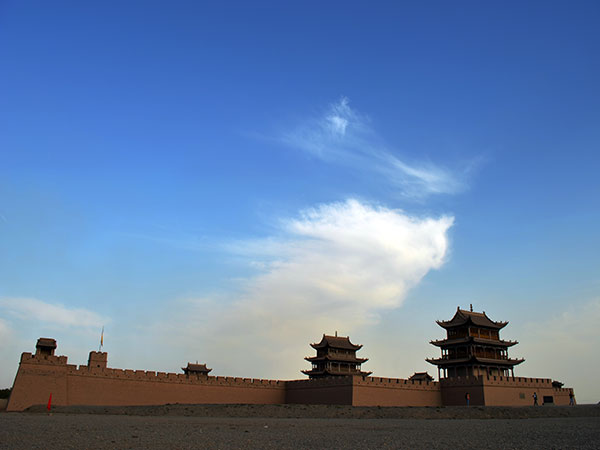 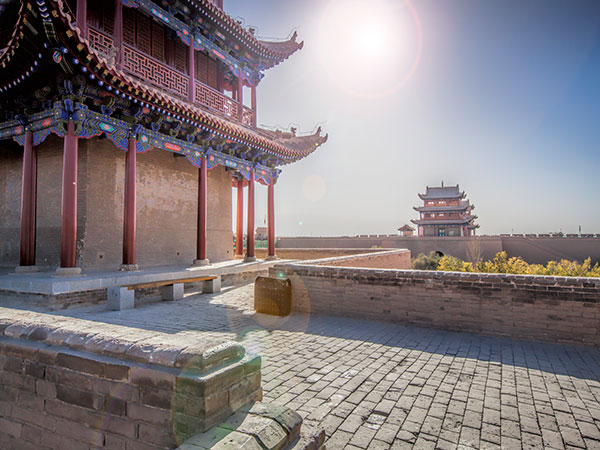 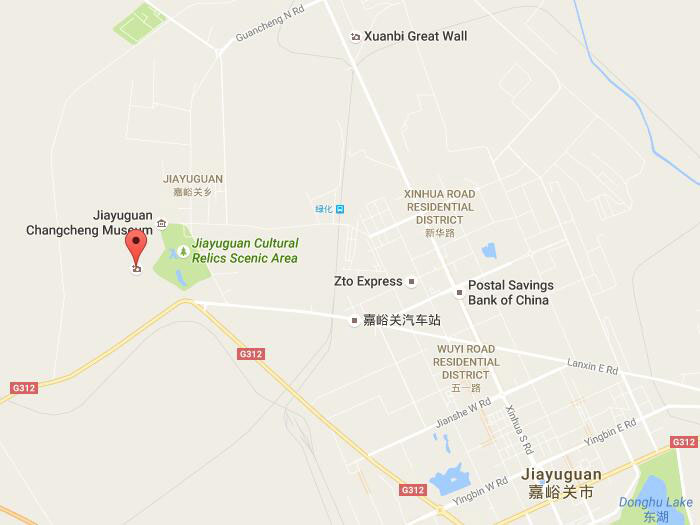 6 km to the southwest of Jiayuguan city.

Western ending or starting point of the Great Wall.

Jiayuguan Pass, or Jiayuguan Fortress, is the first pass at the west of the Great Wall of China. It is situated between the Wenshu and Heishan Mountains at the foot of Jiayuguan Hill of Qilian Mountain. Along with Juyongguan and Shanhaiguan, it is one of the main passes of the Great Wall.
With a length of 733 meters and an area about 33,500 square meters, Jiyuguan Pass has tow gates that one on the east side of the pass, and the other on the west side. On each gate there is a building. It consists of three defense lines: an inner city, an outer city and a moat.
Jiayuguan Pass is well-known as "the Impregnable Pass under the Heaven". It is also the most magnificent and best-preserved pass among the total over one thousand passes along the Great Wall of China. Jiayuguan Pass was built in the early Ming dynasty, about 1372. It was built on the extreme western edge of China. Legend has it that the official in charge asks the designer to calculate how many bricks would be used. The designer gives him the number and when the project is finished, only one brick is left. It is put on the top of the pass as a symbol of commemoration.


Structure of the Jiayuguan Fortress

Jiayuguan Fortress consists of inner city, outer city and moat, forming three lines of defense. It was originally built in 1372 during the Ming Dynasty. The whole construction lasted 168 years from 1372 to 1539. It is the fortress on the most difficult terrain along the Ming Great Wall and is still preserved well. On 1961, it was listed as the first batch of the national key cultural relics protection units. Jiayuguan Pass consists of 3 defense lines: inner city, outer city and moat, and connecting with the Great Wall, forming a military defense system. It is about one beacon fire for each 2.5 km, one fire tower for each 5km, one fortress for each 15km, and one city for each 50km. The inner city is the main construction which is 640 m in circumference with an area of 2.5 square meters. The inner city has two gates. The eastern gate is "Guang Hua Men”, and the western gate is “Rou Yuan Men.” Out of the west gate, there is a Luo City connecting with the south and north wall. The Jiayuguan Gate is the gate to go outside of the pass. On the gate and the wall, the Jiayuguan gate tower was built on.
The whole Jiayuguan Fortress is solid, grand and magnificent. The fortress is in ladder-shape with the circumference of 733 meters and an area of 33500 square meters. It is 10 m high with 1.7m high wall. The gate towers are symmetrical with 3 floors and 5 rooms. There are corridors around the gate towers. There are also turrets on each corner of the fortress. In the center of the fortress there is a well. On the west wall, there is a gate open to outside with “Jiayuguan” on the forehead of the gate. It is said that when built the fortress, the craftsman was very accurate on the using of materials. There were only one brick left after the construction and it is now preserved on the ledge at the back of the Xiwen Gate Tower. Out of the west gate, there is a stone tablet, caved “Tian Xia Xiong Guang”. Out of the Dongweng City, there are Wenchang Pavilion, Guangdi Temple, theatrical stage and a Yamen Mansion, which were built during Qing Dynasty.

Significance of the Jiayuguan Pass

Jiayuguan Pass is not only endowed with geographical advantages, but excellent topographical and environmental features. It faces the Gobi, a vast open terrain that once served as a battle ground in ancient times. To its south is the trubulent Taolai River and the Wenshu Mountain and on its inner side lies a smooth terrain made of oases, fertile pasture land with adequate water sources. What's more, the castle is also of great architectural and cultural value and its towers and pavilions are of great beauty. The pagoda-style roof adds to the grandeur of the castle.