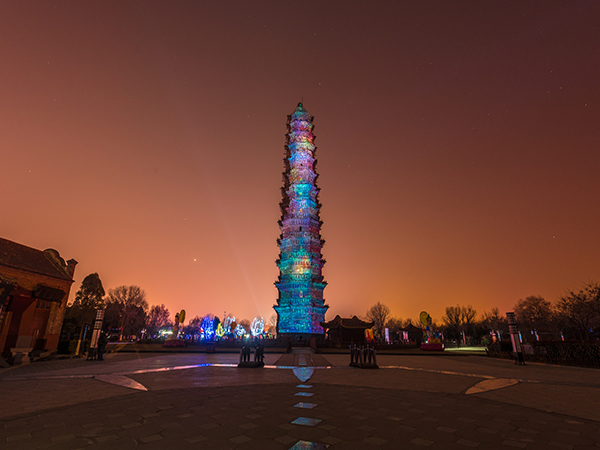 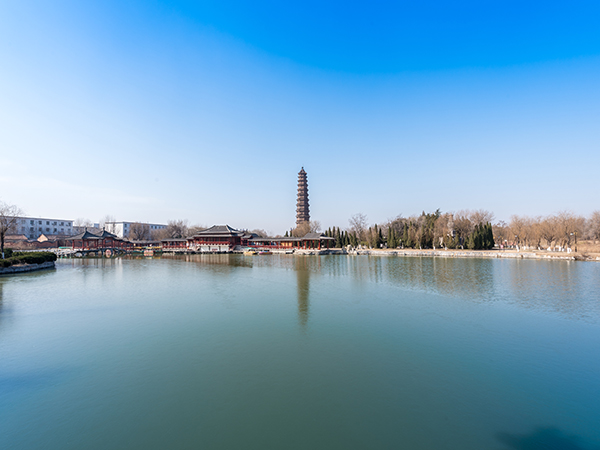 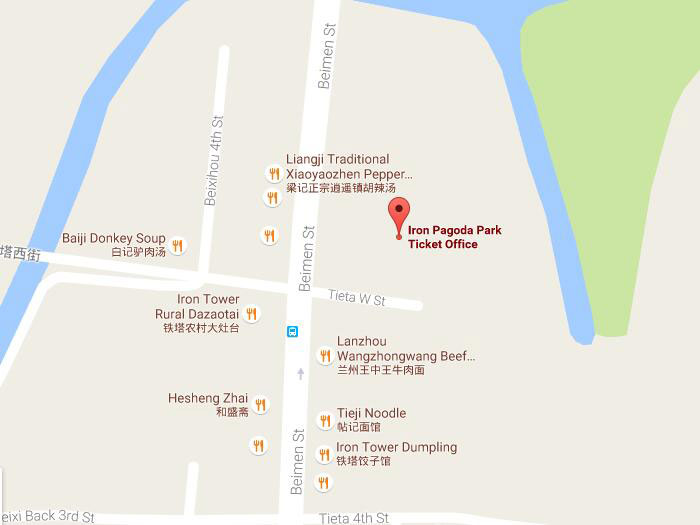 
Located in the northeastern corner of Iron Pagoda Park (Tie Ta) was known as the Kaibao Temple Pagoda originally and is a Buddhist Chinese pagoda built in 1049 during the Song dynasty (960-1279) of China by the Song emperor for keeping the relics of Sakyamuni. The 13-story octagon pagoda is 55.63 meters high and built with brown glazed bricks, like an iron pagoda in the distance, so its name. So, it is not made of iron, but of red, brown, blue and green glazed bricks. As the main hue is reddish brown, the pagoda looks like iron from afar and has thus been called as Iron Pagoda for hundreds of years.

It becomes famous at home and abroad for its excellent architecture art and magnificent shape and is praised as the first pagoda under the heaven. This pagoda is the tallest, largest oldest and well-preserved glazed brick pagoda in the country. Since its construction, it has experienced war, floods and earthquakes several times but it still stands firmly. It is a brick pagoda tower built on the spot of a previous wooden one that had been burnt down by lightning fire in 1044. Along with the Liuhe, Liaodi, Lingxiao, Beisi and Pizhi pagodas, it is seen as a masterpiece of Song dynasty architecture.

What to See in the Park

Iron Pagoda Tower: it is the highlight of the park, also an important heritage. Built in the Northern Song Dynasty, it has a history of nearly one thousand years.

Jieyin Hall: Jieyin Hall is sited right in front of the Iron Pagoda. It was built to enshrine and worship a White Jade Buddha Statue of Sakyamuni(the founder of Buddhism), which was donated by a overseas Chinese residing in Myanmar in 1933. The statue is about 1 meters high and made by a large White Jade.
Bonsai Garden: the garden, built in 1994, is the largest specialized bonsai plantation in Henan Province with the largest number of and the most varieties of bonsai. It looks more like s traditional Chinese garden, with waterside, bridges, rockery, etc., very beautiful.

In addition, you can watch Iron Pagoda Light Show, which makes use of 4D imaging, holographic technology, architectural projection, water curtain film, laser modeling, and other means to creation an amazing show. And from October 18 to November 18 every year, Kaifeng will hold chrysanthemum flower festival. During this time, you can see chrysanthemum flower blooming in red, white, yellow, purple, at every corner of the city. Xianguo Temple, Iron Pagoda Park, Memorial Temple of Lord Bao, etc. will be the main venue of the flower festival displaying all kinds of blooming chrysanthemum flowers.