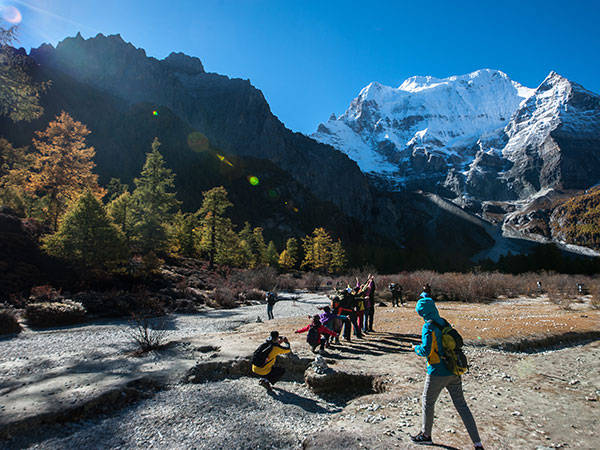 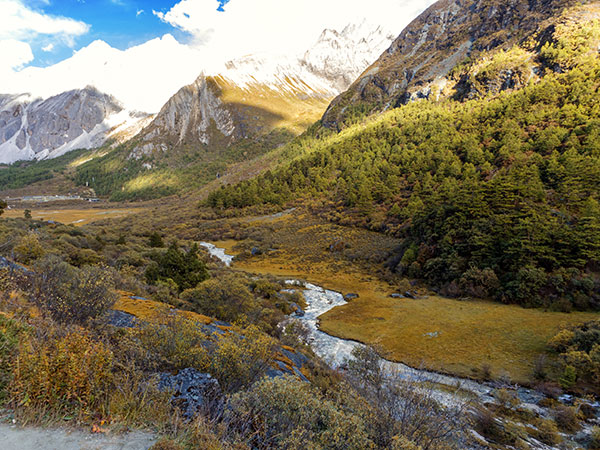 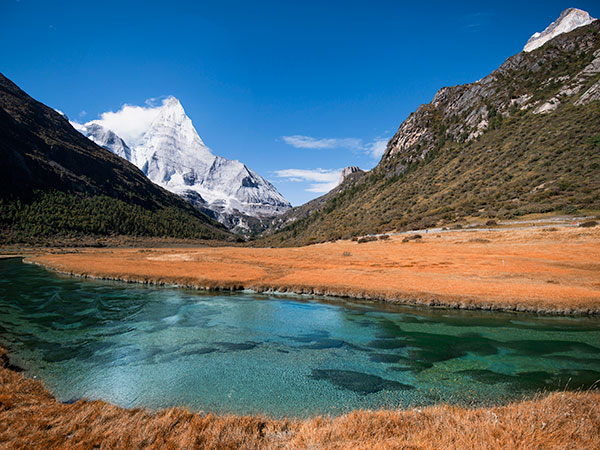 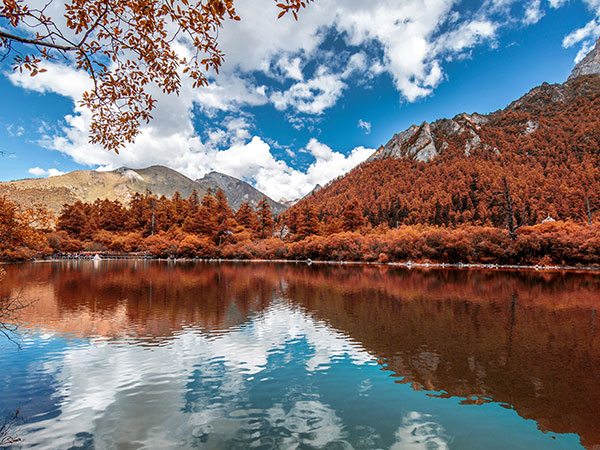 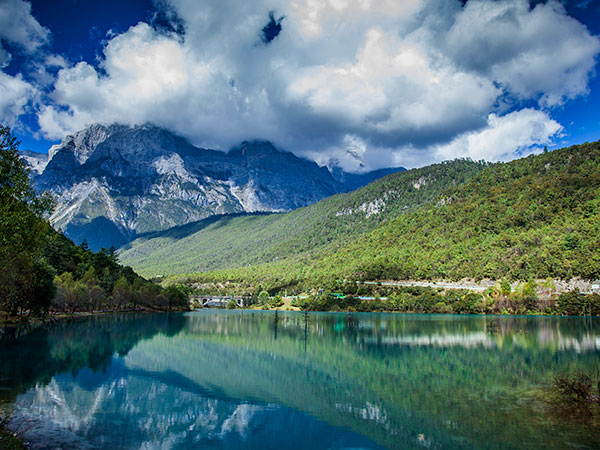 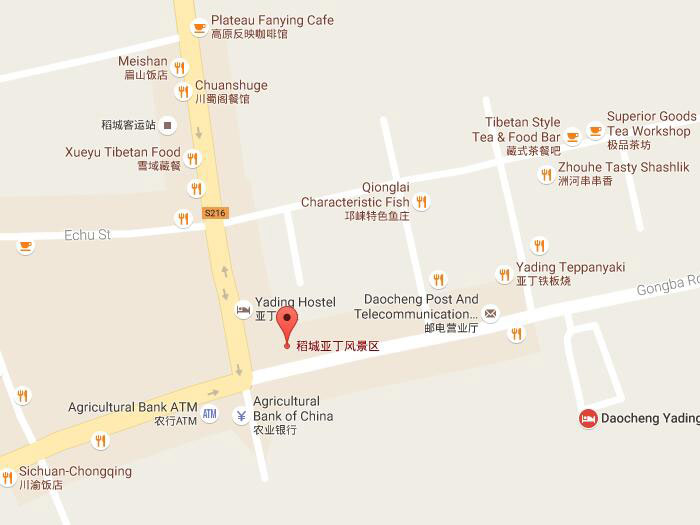 
From the sentence that "Daocheng is the last virgin ground on the blue Earth", we can find out the charms of Daocheng Yading Natural Reserve. Daocheng Yading Scenic Area is famous for its unique original ecological environment and beautiful magnificent natural scenery. It is a paradise for photographers. Daocheng Yading is one of the most intact and primitive alpine natural ecosystems in China and is the core of the Shangri-La Ecotourism Area in China.

Located in Yading Village, Shangri-La Town, Daocheng County, Ganzi Tibetan Autonomous Prefecture, Sichuan Province,southwest China, Daocheng Yading Natural Reserve Scenic Area consists of three holy snow mountains, namely Xiannairi, Jiangbianyang and Xianaduoji, and surrounding rivers, lakes and alpine meadows. The scenery maintains the purity of the near extinction on the earth. Because of its unique landform and original natural scenery, it is widely regarded as "the last pure land in the blue planet."

At an average elevation of 3800 meters, Daocheng is renowned for its magnificent mountain and wild lake scenery. Forests, grasslands, and brooks can all be found in the grand valley, fringed by splendid mountain peaks capped with snow. In this holy land, you can still find local Tibetans living in their traditional lifestyle. Daocheng Yading is located in the eastern part of the famous Qinghai-Tibet Plateau, in the middle of the Hengduan Mountains, a national nature reserve. On July 10, 2003, Yading officially joined the UNESCO World Network of Man and Biosphere Reserves.

What to see in Yading

Daocheng Yading Natural Reserve Scenic Area is the central attraction of Daocheng. It is the most well-preserved natural ecosystem in China, reputed as the last virgin ground in the blue Earth in the world.

The three snow peaks of Xiannai, Jiangbian, and Shana Duoji are the core areas, distributed in the north and south. The three Mountains are the patron saint of the guardian Yading Tibetans and were named one of the top ten most famous mountains in China. North peak Xiannairi means “Guiyin Bodhisattva” (6032m), south peak Yangmaiyong refers to “Manjusri Bodhisattva” (5958m) and east peak Xianuoduoji is “Vajrapani Bodhisattva” (5958m). It is said that if tibetans can worship the sacred mountain three times, they can realize their wishes in this life.

【Chonggu Temple】
Chonggu Temple is located on the foot of Xiannairi Snow Peak, 3880 meters above sea level. It was built in the Yuan Dynasty and is the gateway to the three holy Mountains. It is also the starting point for the local Tibetan people to turn to the mountain. The badly damaged temple has a legend that there was a monk who planned to distribute himself to the holy mountain for spreading Buddhism. When he began to build a temple, he caused the gods angry because he destroyed a scared land. And then, diseases were spread among people. The monk tried to help people get rid of the disaster by reading Buddhism scripts every day. Finally, the gods were touched by his behavior and honesty, so they decided to remove the disaster on the locals. But the monk caught a serious illness and past away. This temple is built to memory his mercy.

The Luorong Cattle Farm, 4150 meters above sea level, is surrounded by three snow-capped mountains. It is the starting point for the five-color sea and the milk sea. It is also the gateway to the Xiannairi mountain route from Chonggu Temple. The Gongga River runs through the pastures, and the tall and low trees are in harmony with a wooden house. It is a natural alpine pasture of Tibetan villagers nearby. Luorong Cattle Farm is recognized as the best shooting place for Mt. Yangmaiyong and Mt. Xianuo Duoji.

【Yading Village】
Yading Village is adjacent to the national natural preserve district – Yading, thus its name. It is reputed as the last Shangri-La in the world. In a 3,900 meters height above sea level, there are about 28 families dwelling here.

What to see in Daocheng County

The scenes are various and bewitching. In the north of Daocheng County lies the plateau area with broad valleys. Mt. Haizi (Lake), parallel to Daocheng River and with an altitude of 3600 - 5000m, is the largest remnants of glaciations on the Qinghai-Tibet Plateau, traditionally called "the Old Ice Cap of Daocheng".

【Bowa Mountain】
The middle of Daocheng county is of mountain plateau, including the Bowa Mountain and the Chitu River. On both banks of the river are broad pastures and stretches of forest. Mt. Bowa, grand and scenic, is sharply distinct during the four seasons: in spring and summer, azaleas bloom to vie each other for beauty, in autumn, leaves as red as flame cover the trees, while in winter, snow clothes all and gleams white. In the south of the county are mountains and valleys.

【Mt. Echu】
Mt. Echu, parallel to Dongyi River and with an altitude of 5140m, is as charming and attractive as a pretty fairy sitting up - right on the clouds, although it is lofty and majestic. What is most fascinating about Mt. Echu is its autumnal tints: the bright red, lucid yellow and delicate green make the mountain colorful. "Both heavy and delight makeup are compatible with it",

【Dongyi River】
The Dongyi River, rushing down from Mt. Echu like a steed, has two banks covered with towering old trees and jagged rocks. The rumbling waves and series of waterfalls wonderfully correspond to the mountain. 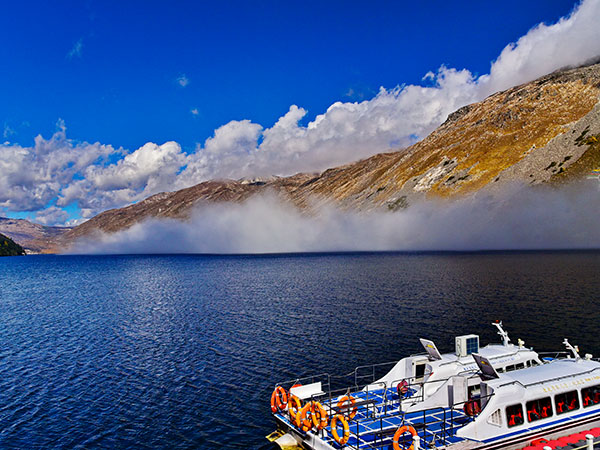