Beijing cuisine enjoys international fame for the variety of dishes developed in the imperial kitchens. None is more universally renowned than Beijing Duck. Esteemed by gourmets for its mouth-watering aroma, tempting appearance and delicate taste, there are secrets in the cooking, skill in the preparation and serving and delight in the tasting. The crispy skin and the juicy meat leave a deep impression on first-time consumers during their Beijing trip. 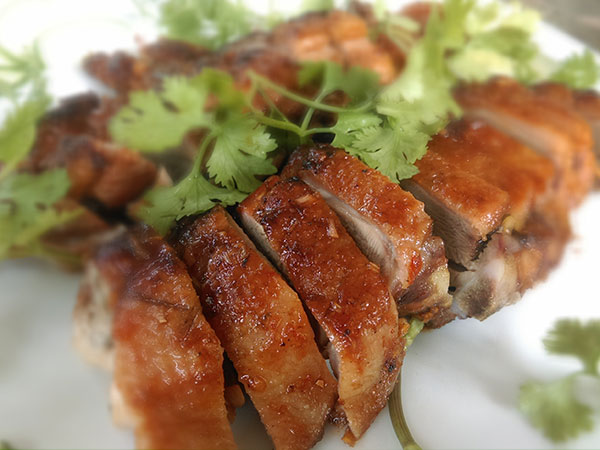 Why is Beijing Roast Duck the most famous dish in Beijing ?

Beijing Roast Duck was an imperial dish during the ancient China. While in the late 1800s, the public got its first whiff of the dish when chefs began opening restaurants outside palace walls. In the past, the catering industry in China was undeveloped and food is not as various as that nowadays. When treating somebody with Beijing Roast Duck, it seems that is a feast for VIP. Just like a folk saying in China that one who fails to reach the Great Wall is not a hero, it is said that one who do not taste Beijing Roast Duck comes Beijing for nothing. Therefore, when people visit to Beijing, to taste Beijing Roast Duck is one of the must-doing things in a Beijing tour. Although you could have roast duck in other cities in China or overseas, you will never find the same flavor as that in Beijing. Beijing Roast Duck is the most traditional and authentic with its unique flavor. 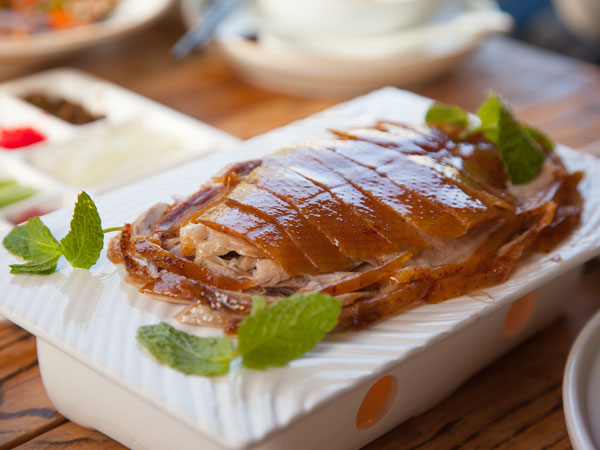 What else is to expect during Beijing Roast Duck dinner except the delicious flavor?

The technique of slicing the skin and meat has a profound influence on the presentation and the diner’s sensations of texture and taste of the duck. The cook always slices the duck in front of customers. Usually, the cook slices the skin first then the meat, ensuring the skin is sliced with a thin layer of meat in order to avoid it breaking into pieces; the flesh is naturally rich in fat, so to avoid an oily taste, vegetables dishes are offered, carrot and cucumber sticks usually. Diners hold a piece of pancake and spread sauce over it, then add a delicate serve of skin, meat and vegetables and wrap them. This is one delicacy that is definitely acceptable to eat by hand.

Originally a dish reserved for the emperors table, with the passing of time, Beijing roast duck entered into the international cuisine, its unique and delicious taste favored by foreign tourists as well as by Chinese people. 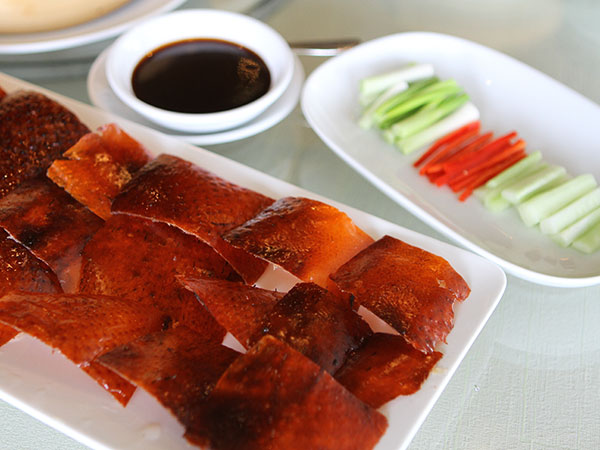 Where is the best place to taste Beijing Roast Duck when I travel to Beijing?

You might ask which restaurant in Beijing is the best duck restaurant for dinner. Please read below Top 4 Beijing Roast Duck Restaurant, 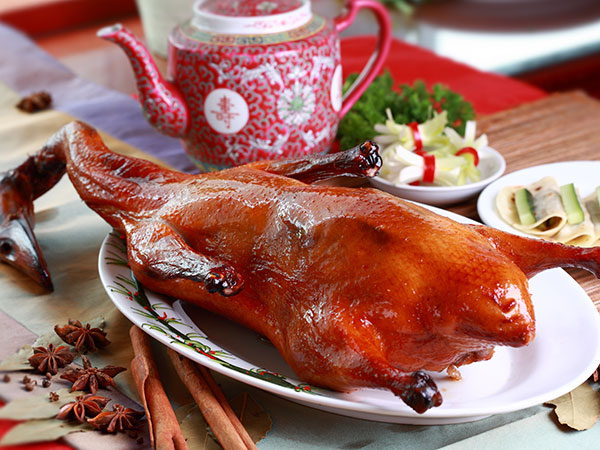 ►No 3 Liqun Roast Duck Restaurant (利群烤鸭店)
This is small duck restaurant in a traditional courtyard house in Beifengxiang Hutong of Beijing. There isn’t any advertisement and conspicuous shop front, but many people come for roast duck especially by its reputation. The owner of this restaurant is named Liqun Zhang, who worked for Quanjude before.
•Address: No 11 Beifengxiang Hutong, East Qianmen Street, Beijing
►No 4 Dadong Roast Duck Restaurant (大董)
Dadong Roast Duck Restaurant started in 1985, originally called Beijing Roast Duck Restaurant. The roast duck at Datong belongs to new school of Beijing Roast Duck. It is different from traditional roast duck as it includes less oil and fats in the duck crackling, but still tastes crispy. As the restaurant cooks and creates dishes from healthy point and the restaurant condition and atmosphere is good, it is popular in foreign visitors.
•Address:
Dadong Nanxincang (南新仓店)： No. 22 Dongsishitiao, Dongcheng District, Beijing
Dadong Tunjiehu (团结湖店)：No. 3 Tuanjiehu Beikou, Dongcheng District, Beijing
Dadong Jinbaohui(金宝汇店)：5th Floor Jinbaohui Shopping Mall, Beijing