Perhaps more than any other practitioner, Bruce Lee opened the eyes of the Western world to the fascinating practices of Chinese martial arts; now the worldwide followers of the various related disciplines number in the millions.
The Red Theater specializes in traditional Chinese performances, such as "The Legend of Kung Fu". The story follows the life adventures of a young boy found wandering outside an ancient temple. Like every boy in China, he dreams of becoming a Kung Fu* master. On the road to enlightenment the young monk encounters many difficulties and temptations. The show has English subtitles shown above the stage to keep you informed of the story line. There is no dialogue, the show is all Kung Fu, dance and acrobatics. It is the fusion of modern dance with Chinese traditional arts which make this performance unique and spectacular. Some of the best Kung Fu practitioners in China have been found for this production and it shows on the stage. Their average age is just 17 years! The costumes, set design and special effects are up to international standards, created by some of the best stage directors and designers in China. So if you are a fan of Chinese martial arts*, add this experience to your visit to Beijing. 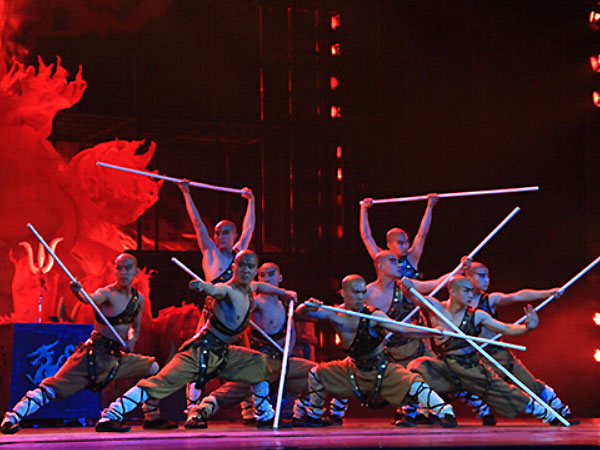 Kongfu Show in Beijing
*Kung fu and Wushu are popular terms that have become synonymous with Chinese martial arts; the literal translation of "Chinese martial art" would be Zhōngguó Wǔshù; Kung fu, however, can be used in contexts completely unrelated to martial arts, and refers colloquially to any individual accomplishment or skill cultivated through long and hard work.

Where can I watch a Kungfu Show when I am in Beijing?
•The Red Theater
Address: No 44 Xingfu Street, Beijing,China
Showtime: 17:15 and 19:30 daily