Chengdu, the capital of Sichuan Province, located in the west plain in the Sichuan Basin, is a famous historical and cultural city with a history over 3,000 years. It serves as the provincial center for politics, economy, culture, and transportation. Its jurisdiction is over nine districts, four county-leveled cities and six counties. Known as the land of abundance, Chengdu boasts plentiful local products, a pleasant climate, a large number of scenic spots and historical sites, and fine traditional handicrafts well known both at home and abroad. 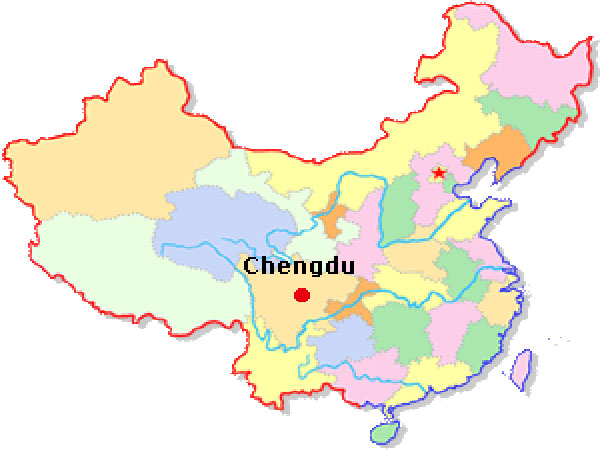 As an important city in southwest, Chengdu has convenient communications. More than 160 scheduled fights go to over 60 large and medium-sized cities at home and abroad. The Shuangliu International Airport is only 20 kilometers away from the city proper. In addition, Chengdu is the largest railway transportation hub in southwest China. It has two railway stations and many train tickets offices in the city proper.

Administrative Division: Chengdu is a sub-provincial city. It has direct jurisdiction over 9 districts, 4 county-level cities and 6 counties

Population: According statistics, the total population in Chengdu is estimated around 12.21 million. Unlike the other parts of the Sichuan Province where many ethnic minorities like Tibetan, Qiang, Miao, Hui, Mongolian, Tujia and Manchu are living, Han Chinese is the vast majority nationality group in Chengdu. The fast growing of the population in the city thus makes Chengdu become a metropolitan. 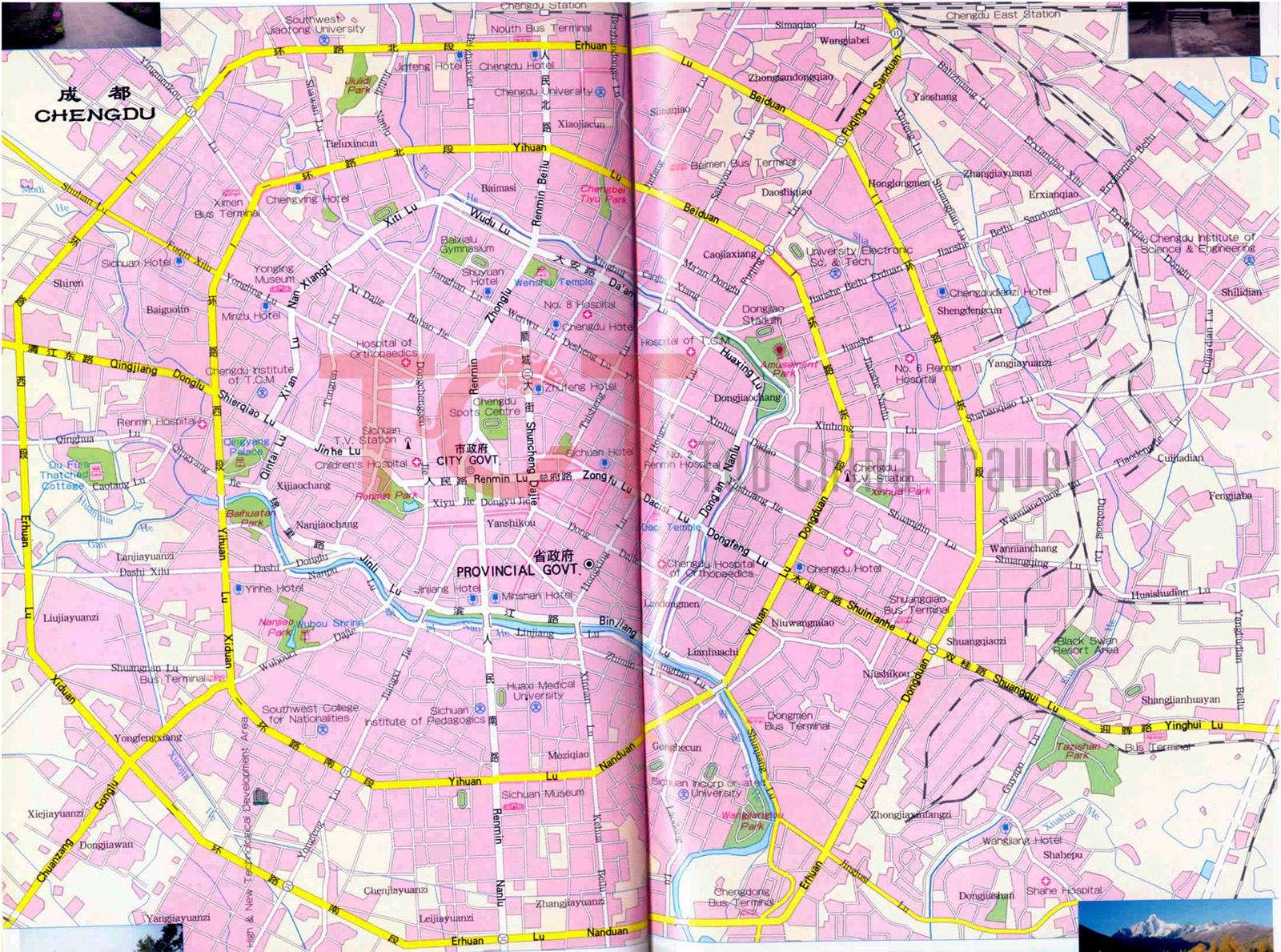 Chengdu has a humid subtropical climate (Koppen Cwa) and is largely mild and humid. Chengdu is situated at the western edge of the Sichuan Basin and is therefore sheltered from northwest winds from Siberia in winter by the Qinling Mountains to the north; the short winter is milder than in the Lower Yangtze because of the sheltering effect of the Qinling.

According to the records and relics, there was human being living on this piece of land about 3,700 years ago. It is about 2,300 years ago the ninth king Kaiming of ancient Shu State moved his capital to the site and named it 'Chengdu'. Then the name has been kept until today. Due to its economic and military importance, more than seven local regimes appeared here in the history started from the end of Western Han Dynasty (8 A.D.-25 A.D.). Among them, the most famous one is the Shu State during the Three Kingdom Period 1,700 years ago. It is a miracle for a city to remain unchanged and prosperous through thousands of years and flames of wars, however, Chengdu is a miracle of this kind. During its development, the city has gain many reputations, such as the land of abundance, the city of Hibiscus, and the city of brocades.

Chengdu enjoys a subtropical monsoon climate characterized by an early spring, hot summer, cool autumn and warm winter. The average annual temperature for the year is 16 degree Celsius.
The best time to visit is between March and June or between September and November. The hottest season here is during July and August when temperatures can be almost unbearable although Chengdu does have a few nice spots (such as Qingchengshan Mountain) outside the city center where it is possible to get some shade and respite from the heat.
This is also the rainy season, however, it is awkwardly juggling the two types of weather at once! In summer the heat is wet with a high temperature of 35 degree Celsius and in winter, the average temperature is approximately 5 degree Celsius.
• Best Time to Visit
♦ Spring (March to May): Spring temperature rise early which is good for growth of trees and crop. But the rise and fall is not stable, and it is easily occurring continuous low temperature that will influence planting crops in the spring.
♦ Summer (June to August): Early summer temperature is moderate, daily temperature difference is bigger. In midsummer there are rainy and strong light.
♦ Autumn (September to October): There are short autumn with shady and cool of continuous rainy weather and long autumn with clear and refreshing weather. The most hottest months appear in July and August, monthly average temperature of 25.0 and 25.4 ℃; Annual total rainfall of 918.2 millimeters, rainfall mainly concentrated in the July and August, monthly rainfall of 225 and 229 mm respectively, rainstorm period generally appear in May to September, perennial rainstorm always appear respectively in late July and August, and at the end of June.
♦ Winter (November to next February): There is no severe cold in winter, which is good for crops and livestock growth. The continuous foggy weather has influence on shipping and traffic. And winter is very dry and has less sunshine. Winter temperatures average above 5 ℃, but it's cloudy, damp, so it is quite cold.
• Dressing Tips

♦ Spring (March to May): temperature is moderate, but it is a little cool with rains. A thin coat is enough.

♦ Summer (June -August): Chengdu summer temperature is higher, hotter, short sleeves and short pants is suitable; People can put on trousers if you feel discomfort with mosquito, or carry a small bottle of floral water spray. About summer ultraviolet ray, do not have to worry too much, basic sunscreen protection is enough.

♦ Autumn (September to October): autumn is quite cool. Temperature difference is a little large. So a thick coat is necessary.
♦ Winter (November to February): The winter temperature is moderate, but relatively cold, people need to wear thick cotton-padded clothes and thick pants, wear a scarf, hat and gloves. If meet the rainy day, Chengdu will be colder, need to wear thick clothes. Wearing cotton-padded jacket is more than wearing down jacket, outdoor temperature won't be below zero, but the interior is very cold, so still need to prepare a cotton-padded jacket and long johns!

Chengdu is "the cultural city of China" and "China's best tourist city", carrying the history of several thousand years, and it was awarded the "gourmet city" by UNESCO creative cities network. Chengdu has two world heritages, two tentative world heritages, is the city with the most number of world heritage in central and western China, and is a famous historical and cultural city with three thousand years history of the founding. Chengdu has the Wuhou temple,Thatched Cottage of Dufu, Qingyang Palace, Wangjiang Pavillon, Wenshu Temple, Ming Shu King Tomb, Zhaojue Temple, and many other historical monuments and the humanities landscapes.
• Best Places to Visit
♦ Dujiangyan Irrigation System–Dujiangyan Irrigation System is located in the Guankou town Dujiangyan city Chengdu city, Sichuan province, is large water conservancy project constructed since the ancient time and used so far, known as "the ancestor of the world water conservancy culture", and it is the national famous tourist resort. This irrigation system was designed and implemented first in the china in the middle of 200 B.C. This is one of the oldest irrigation systems and this is still in function these days. 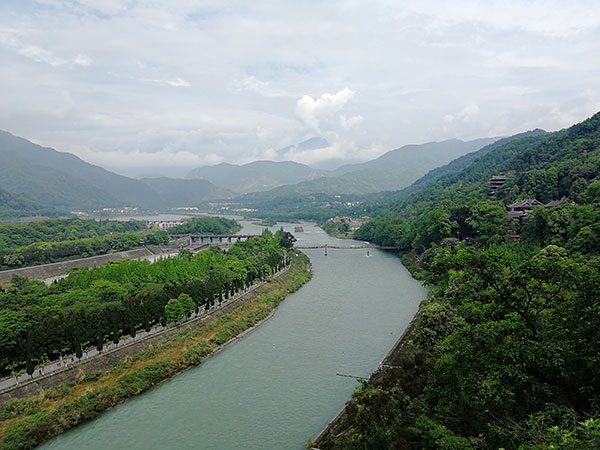 ♦ Wuhou Temple –Wuhou Temple museum is famous at home and abroad of The Three Kingdoms culture. The temple is built to memorize Zhuge Liang, the distinguished statesman and strategist during the Three Kingdom Period, meanwhile the symbol of wisdom in Chinese people's mind. For his accomplishments as the minister and great personality, he was gain the name of Martial Marquis after his death. Hence, the temple got the name. Wuhou temple was built in 223, is mainly composed of Hui Tomb, Han Zhaolie Temple and Wuhou temple. The temple is magnificent and quiet, is the first batch of national key cultural relics protection unit. 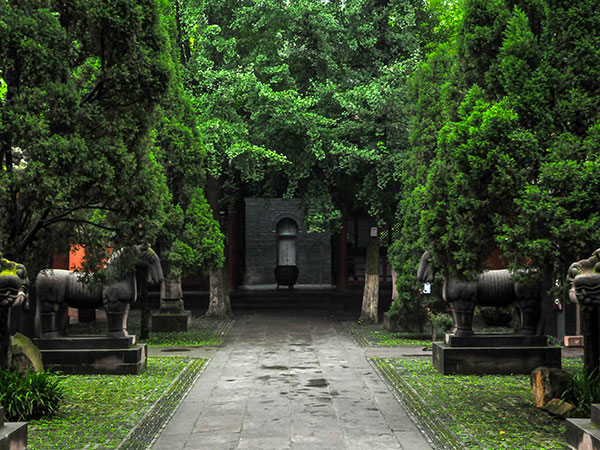 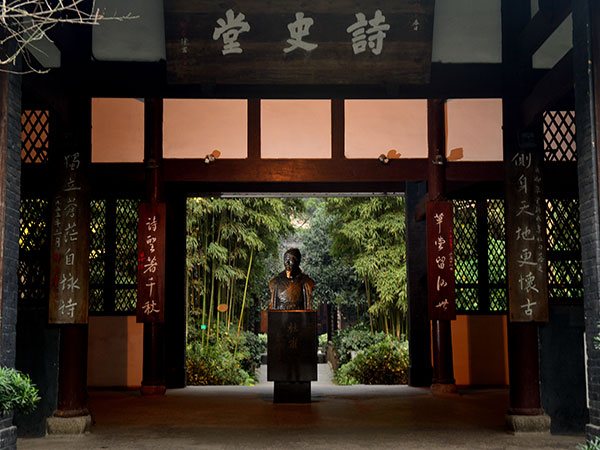 ♦ Kuan Zhai Alley –Kuan and Zhai alley is an ancient street left over from the scale of the Qing dynasty in Chengdu, known as the three major historical and cultural city protection blocks in Chengdu with Jamchen Lhakhang monastery and Wenshu Temple. The region on the basis of protection of old Chengdu original building forms complex cultural commercial street that is given priority to with travel, leisure, which has distinct regional characteristics and rich cultural atmosphere of Bashu. 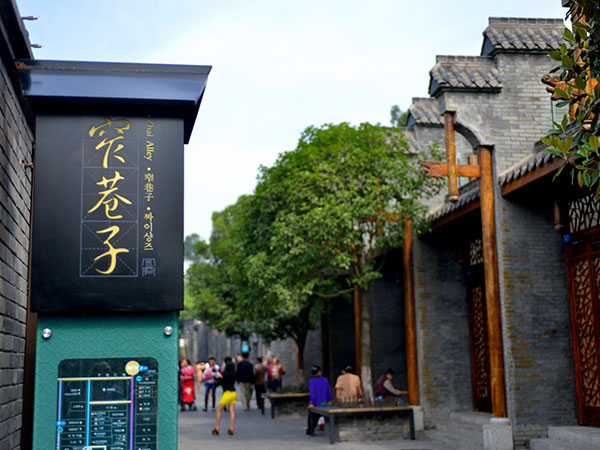 Known as the land of abundance, Chengdu boasts plentiful local products, a large number of scenic spots and historical sites, fine traditional handicrafts well known both at home and abroad.
One of China's four big famous brocade Shu Brocade and one of China's four big famous embroidery Shu embroidery is good souvenir or gift for friends; Porcelain, bamboo weaving are also special. Silver handicrafts are beautiful and artistic.
If you want to find some jewelry, antique and art articles, Qintai Road and Songxian Bridge Art City are good place for these. And if you want to experience custom of Chengdu, you can visit to Jinli Street where the Chengdu Folk Custom Street is.

Chengdu is the largest transportation junction in Sichuan and also in southwest of China. Now it is already form the transportation net of urban trunk road, national highway, railway and airlines.