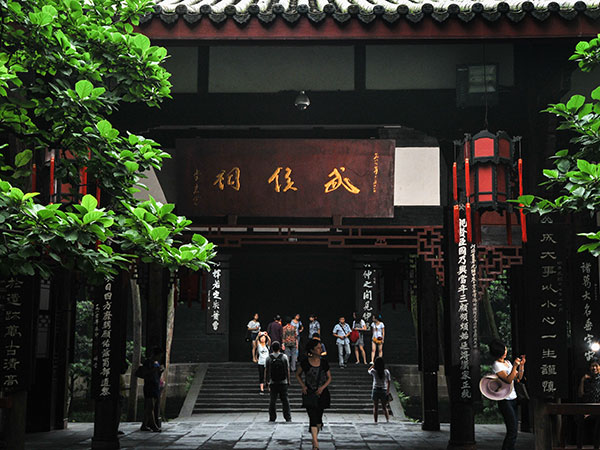 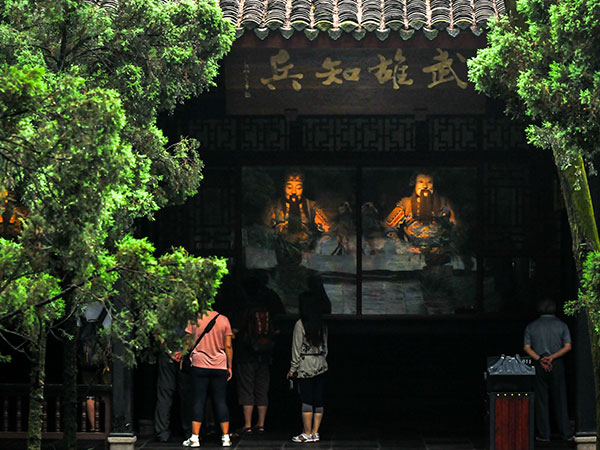 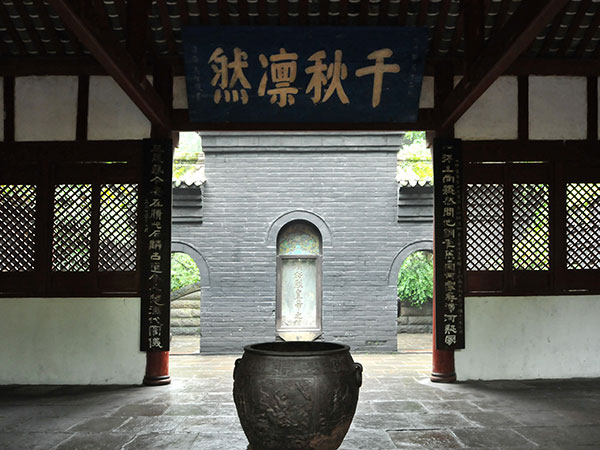 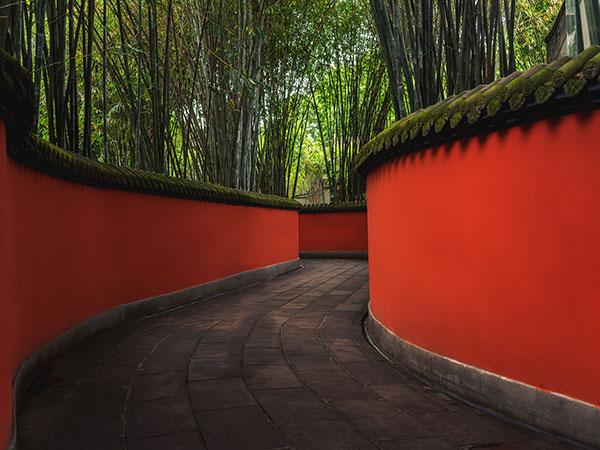 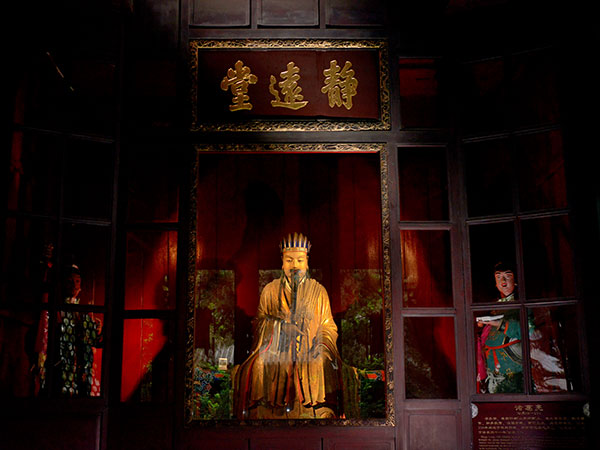 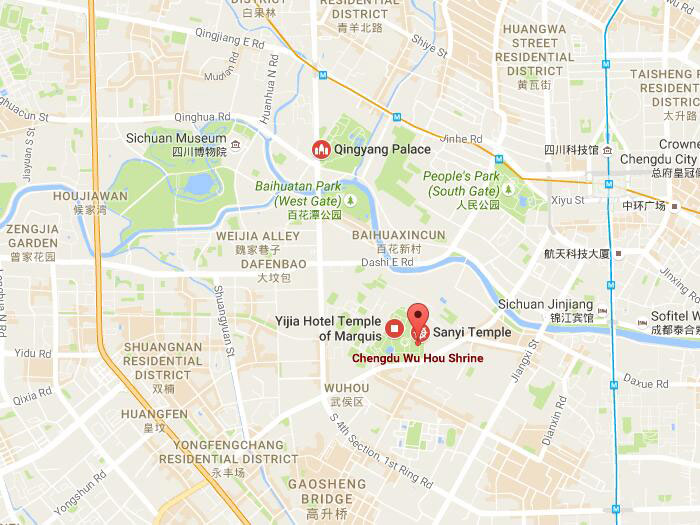 
Chengdu Wuhou (Martial Marquis) Temple is one of the most popular attractions in the country. It is the largest museum of the site left over from the Three Kingdoms Period, and a very quiet oasis in the city.
The temple is built to memorize Zhuge Liang, the distinguished statesman and strategist during the Three Kingdom Period, meanwhile the symbol of wisdom in Chinese people's mind. For his accomplishments as the minister and great personality, he was gain the name of Martial Marquis after his death. Hence, the temple got the name.
The first building time of the temple cannot be found out now, however, it can be deducted that the time at least was as early as Tang Dynasty according to a famous Tang Poem by Tu Fu. Today, the temple covers an area of 37, 000 square meters and surrounded by the red wall as well as the green pine trees. The main building is located in the north part of the complex facing to the south. Along the axle wire, there are located the gate, the second gate, Temple of Liu Bei, the corridor, and Temple of Zhuge Liang one by one. Inside the temple, there are 41 statues of historical figures of Shu State during the Three Kingdoms period. Each figure is of 1.7 to 3 meters tall and made by deft craftsmen in Qing Dynasty. The most valuable relic in the temple is the Tang stone tablet erected between the gate and the second gate. The tablet is 367 centimeters tall and 95 centimeters wide, which was made in the year of 809. It was named ‘Three Success' because of the wonderful inscribed article, the excellent inscribed calligraphy skill and the respected characteristics of Zhuge Liang mentioned in the article.

In August 234 AD, Zhuge Liang became ill because of overwork, and died in the northern front of Wuzhangyuan (now about 20 kilometers south of Qishan county Baoji city Shaanxi province), at the age of 54. Zhuge Liang was the Shu prime minister, who had been dubbed "Wuxiang Marquis", after death he was dubbed again as Zhongwu Marquis by Shu latter king Liuchan, so people called his temple for the "Wuhou Temple (Martial Marquis Temple)".
In A.D. 223, Liubei Mausoleum was built. When the early years of the Ming dynasty Wuhou Temple was reconstructed and was integrated into the premier of "Han Hui Tomb", forming the existing temple of monarch and his subjects. The existing main architecture of the temple was reconstructed in 1672 the Qing dynasty Kangxi period (the eleventh year of emperor Kangxi).
Published in 1961 as the national key cultural relics protection unit. The museum was established in 1984. In 2008 was named the first batch of state-level museum, enjoys fame as the "Three Kingdoms" the holy land. Chengdu Wuhou Temple divided into three parts of cultural relics area (the Three Kingdom historic district), the botanical garden area (Three Kingdoms Culture Experience Area) and Jinli (Jinli folk area), in the area of about 150000 square meters. In 2006 was named the national AAAA level traveling scenic area, is the biggest impact of The Three Kingdoms ruins museum all over the world.

【Southern Suburb Park】
In December 2003, the Southern Suburbs of Chengdu park to merge with Wuhou Temple garden area. Southern Suburb Park, it was Liuxiang cemetery, who was chairman of Sichuan province during the period of the republic of China, the seventh theater commander during Anti-Japanese War. It was founded from 1938 to 1942. 400 meters the central axis pass through from north to south, there is stone memorial arch gate, square pavilion, Jianxin hall, chamber, etc., is the only north cemetery buildings in southwest China. In 1953, it was repaired and maintained as park.
【Jinli Ancient Street】
Jinli Street that next to the Wuhou Temple was rehabilitated by Wuhou Temple Museum and it is the "national cultural industry demonstration base". Jinli as a part of Wuhou Temple  Museum (the Three Kingdom historic area, Jinli folk custom area, West side), with an area of more than 30000 square meters, building area of more than 14000 square meters, the street total length of 550 meters. Building in the Jinli Street is on the basis of the Sichuan folk house style of Qing dynasty, the content is based on Three Kingdoms’ culture and Sichuan traditional folk culture as the connotation. In the October 2004, Jinli was officially opened to the public.
It is said that Jinli was the oldest and commercial street in the history of west Shu, as early as the Qin and Han dynasties and The Three Kingdoms period it was famous throughout the country. Today Jinli in relying on Chengdu Wuhou Temple, in the spirit of Qin and Han dynasties and the Three Kingdoms as Jinli soul, the Ming and Qing style buildings as Jinli appearance, folkway and folk-custom of Sichuan as for Jinli content to expand the extension of The Three Kingdoms culture. This street condensed the essence of life in Chengdu: teahouse, inn, restaurant, bar, stage, delicacies, handicraft and local products, which fully demonstrate the unique charm of Sichuan folk customs.
【Liubei Palace】
After second door is Liubei Palace, it also named Zhaolie Temple. Main entrance into Wuhou Temple, people can meet the magnificent Zhaolie Temple. Zhao temple is single eaves gable and hip roof building. In the middle is Liubei golden statue, 3 meters high. On the left side is his grandson Liuzhan. Originally there was emperor Liuchan (Liubei’s son) statue, because Liuchan was incompetent that he couldn't keep Shu kingdom, so it was removed by Sichuan local officials in Song dynasty Zhenzhong period, then it wasn’t built again. On both sides of the partial temple, east is father and son of Guanyu statue and Zhoucang statue, west is the statue of three generations of Zhangfei. On both sides of the east and west there are respectively 14 statues of Shu-Han kingdom officials and military commanders.
【Zhuge Liang Palace】
Behind Liubei Palace, passing the number of steps (Wuhou Temple is lower than the Han Zhaolie Temple, symbolize monarch-subject relationship) is a lobby, hanging with "Wuhou Temple" horizontal inscribed board. Wuhou Temple is for memorizing Wuxiang marquis Zhugeliang in Three Kingdoms of Shu Kingdom, so the temple was named Wuhou Temple.

How to Get to Wuhou Temple