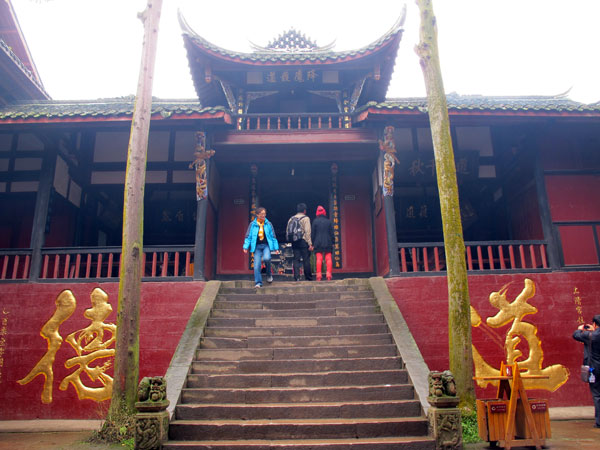 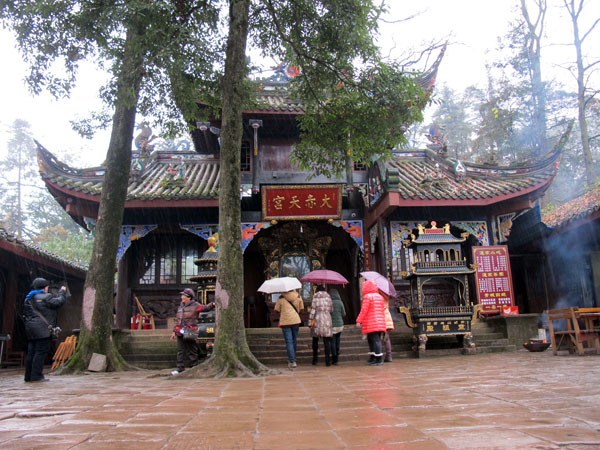 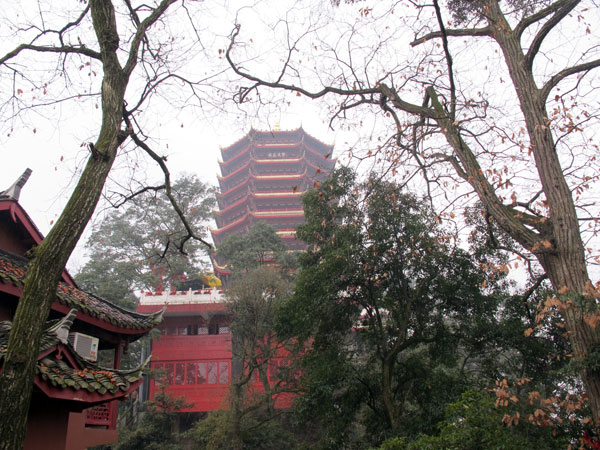 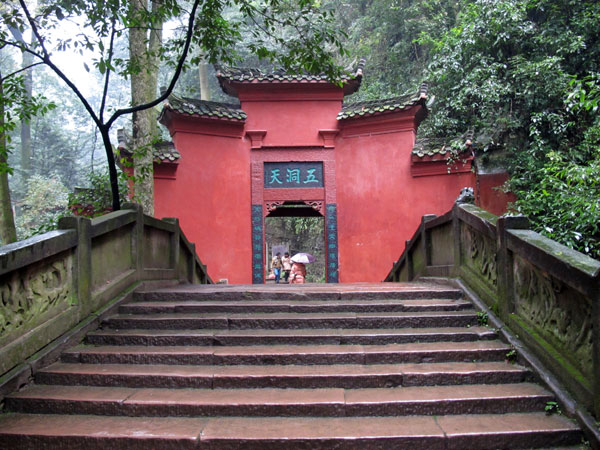 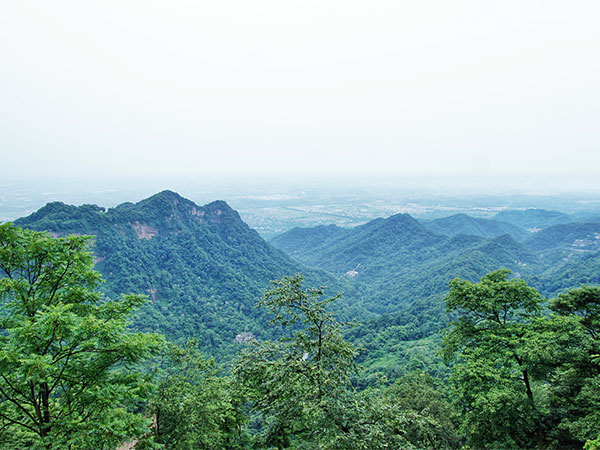 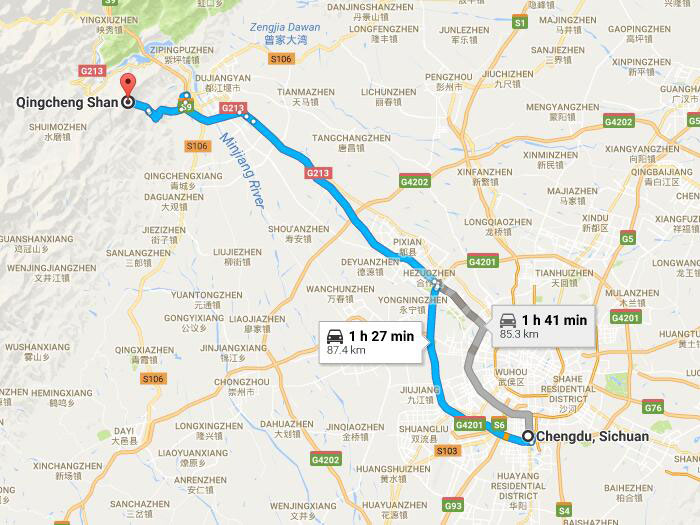 A UNESCO World Heritage Site; A scenic site to admire both Taoist culture and natural landscape


Qingcheng Mountain is one of the ancient cradles of Taoism. The mountain has numerous Taoism temples and sites along the paths to the peak. The area is lush and green all year round and is famous for its secluded tranquility.
Jianfu Temple is a large and well-preserved Taoism temple from the Tang Dynasty located at the foot of mountain. About halfway up the mountain sits Tianshi Cave, the temple and school of Zhang Daolin, a famous Taoism master who taught here and contributed greatly to spreading Taoism in China. The present Tianshi Cave buildings were built at the end of the Qing Dynasty. Near the peak there sits Shangqing Temple, which was originally established in the Jin Dynasty, while the current temple buildings are Qing Dynasty constructions. 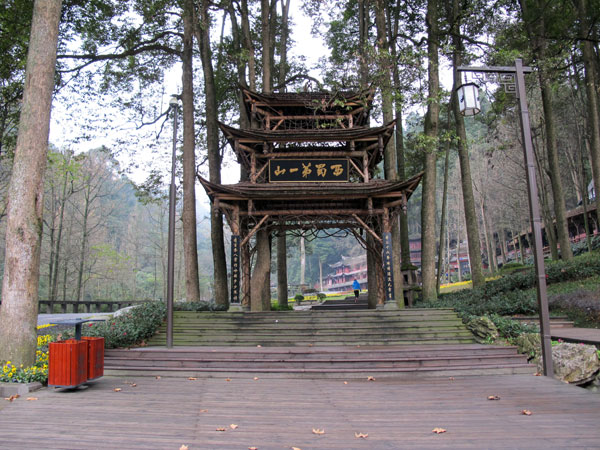 QingchengMountainis the famous Taoist mountains in China, one of the birthplaces of Taoism in China, which has two thousand years history since the Eastern Han dynasty. During Eastern Han dynasty Emperor Shun period second year (AD 143), the founder of Taoism "Tianshi (Taoist master)" Zhangling came to Qingcheng Mountain, select the deep green Qingcheng mountain to preach, then Qingcheng Mountain became the birthplace of Taoism, and has listed the "fifth land". The whole mountain of the Taoist temple is centered on Tianshi cave, including also known, in the qing dynasty palace, yuan Ming palace, old gentleman, and there are Jianfu Palace, Shangqing Palace, Founder Hall, Yuanming Palace, Laojun Pavillion, Yuqing Palace, Changyang Cave, etc, of tens of well-preserved Taoist Palaces.

Qingcheng Mountain Scenic Area is divided into two parts of front mountain and back mountain. Front mountain is the main part of the Qingcheng Mountain Scenic Area, about 15 square kilometers with beautiful scenery, numerous cultural relics. The main attractions are Jianfu Palace, Tianshi Cave, Chaoyang Cave, Zushi Temple, Shangqing Palace, etc.; back mountain with a total area of 100 square kilometers, and the main attractions are Shengmu Cave, mountain spring fog pool, White Cloud Cave, Platform Bridge Wonders, etc.
【Front Mountain Scenic Area】
Front mountain is centered on Changguan Temple and Shangqing Palace, the temple and palace look at each other. Main attractions are Laojun Pavilion, Yuecheng Lake, Tianshi Cave, Shangqing Palace, Wudongtian, Green Qingcheng, Natural Pictures, Zushi Temple, Chaoyang Cave, Yuanming Palace, Jianfu Palace.
【Jianfu Palace】
Jianfu Palace is located in the Zhangren Peak. Founded in the eighteenth year of Tang dynasty Kaiyuan period (AD 730) and it was repaired for many times, now there are only two halls and three courts. The existing building is rebuilt during Qing dynasty emperor Guangxu period (AD 1888). Currently there is triple of the hall for enshrining celebrity of Taoism and the gods, and there are 394 word couplets on the column, hailed as "a specialty of Qingcheng Mountain". Jianfu Palace built under the cliffs, which is extraordinary. It is on the left side of the Mingqing Mansion princess sites, and 1 km west is the aloft rocks and misted "Natural Pictures" attraction. 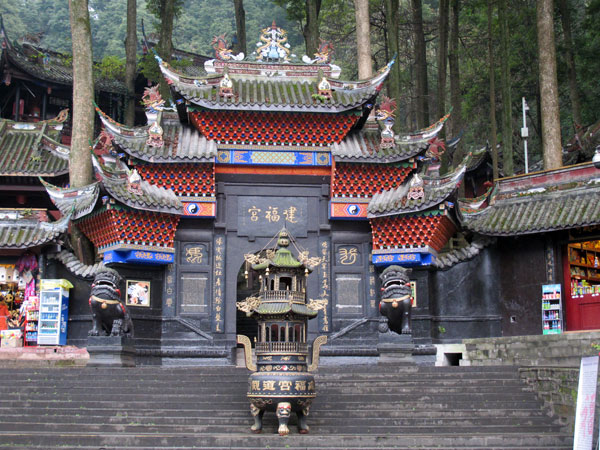 【Laojun Pavilion】
Laojun Pavilion is located in the top of the first peak of Qingcheng Mountain (that is top of Pengzu peak), a height of 1260 meters above sea level, on the top of there is original echo pavilion. In the late 1980s the pavilion was rebuilt. After "5.12" earthquake destroyed in 2008, now rebuilding pavilion 33 meters high, a total of nine floors, and a floor has eight corners, symbolic nature round place; its appearance is turriform, steepletop. Inside the pavilion is empty, and there is sitting solemn statue of the very high lord on the lotus, 7.3 meters high, seat stand is 10.37 meters high.
Laojun Pavilion building is including Donghua Temple, etc. Donghua Temple of one hundred square meters, enshrined in Donghua sovereign in the middle, and Lvdongbin and Zhongliquan on the both sides. Laojun Pavilion built in autumn 1992, lasted three years. 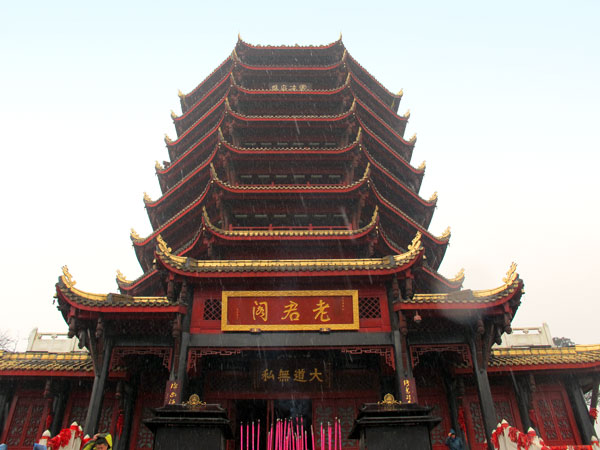 【Shangqing Palace】
Shangqing Palace is located in the Qingcheng Mountain, slope, about 500 meters from the summit. Shangqing Palace was built in the Jin dynasty, the existing temple builtin the Qing dynasty Tongzhi period, and the three characters of Shang Qing Palace was written by Chiang Kai-shek. The palace enshrined in Taoist ancestor Li Laojun, Lao tzu statue and the “Morality Book” five thousand woodcut, and there is Magu pool, Yuanyang well and other legend relics as well...Shangqing Palace is the best place to watch the sunrise, magic lamp, and the sea of clouds spectacle.

【Tianshi Cave】
Two kilometers from north of Jianfu Palace is the main temple of Qingcheng - Tianshi Cave. Tianshi cave was built in the Sui dynasty Daye period, surrounded on three sides by mountains and faces a stream and the towering old trees make it ancient quiet. Existing temple built in the late Qing dynasty with great size, fine carving, and there are many rare and precious cultural relics and ancient trees.
【Back Mountain Scenic Area】
Qingcheng Mountain back mountain scenic area is located in back of Mount Qingcheng, Taian Township of Dujiangyan City. The scenic area is 70 km from Chengdu, covers an area of 100 square meters. Neighbor to the Wolong Nature Reserve, connects to Zhanggong Mountain in the northeast, and oversteps Tiancang Mountain and Qianyuan Mountain to Tianshi Cave and Jianfu Palace, on the southwest border with Liuding Mountain and Tianguo Mountain. It was hidden, and until the 1980s it was developed. There are mysterious water-eroded cave, beautiful river, rare tomb complex and large sites of Shu King, famous ancient temples. Here mountains, water, cave, corridor, and forest are an organic whole, can be comparable to Qingcheng Mountain front mountain. Scenic area more than 20 in all the way, there are ski lifts can make tourists save half way, they can appreciate the Qingcheng Mountain most of the sceneries in the back mountain. 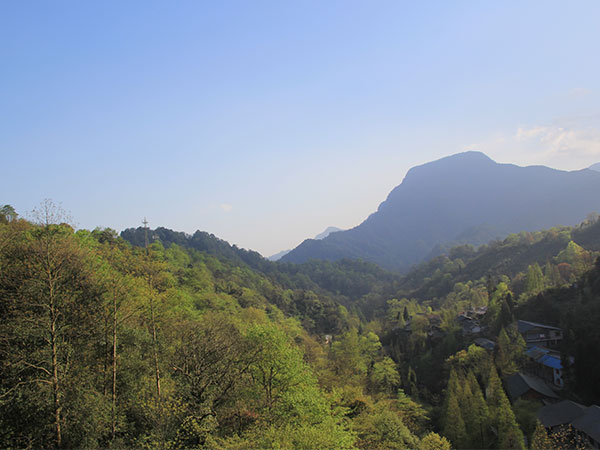 【Taian Ancient Town】
Taian Ancient Town is a important hub to "Huaping Laoze Road" since ancient times for entering the Jinchuan from west of Chengdu area. Song dynasty there was set Weijiang Town, after the beginning of the Qing dynasty in accordance with the Ancient Taian temple, the town was renamed as Taian town. Taian Temple is located in the middle of town. In the ancient town, there are many restaurants and hotels for tourists to stay.
【Five Dragon Ditch】
Five Dragon Ditch called Manhe Ditch in the ancient time, it is about 8 kilometers long. And it gained its name because legend that five dragon hiding in the ditch. There is excellent scenery of Longyin gorge plank road, stalagmites rock, echo wall, etc.

【Cliffside Spring Groove】
Cliffside Spring Groove named Lengning Groove in the past. From Taian Temple and pass Huanghe Bridge, you can see the Cliffside Spring Groove. Water run out from Yinghua Mountain South Gate, it accepts the water of Baimo Ditch, Guanyin Rock Ditch, Xiangshui Ditch, and flows into Weijing River, 10 km long in all. And the most spectacular is “deep and secluded valley Cliffside spring” “hundreds Zhang (a unit of length) of bridge” and “two spring curtains”.
【Baizhang Bridge (Hundreds Zhang of Bridge)】
Baizhang Bridge is located in Cuiying Lake and Baiyun Ancient Village, the middle reaches of the Cliffside Spring Ditch. The bridge paved with boards, winding upstream, about hundred meters long. Old trees on both sides, green gramineous trailing plants are like dancing gauze. Cuiying Lake is tens of meters long mountain pool, around the beautiful scenery.
【Shengmu Cave】
Qingcheng Mountain Shengmu Cave is a natural sand shale water-eroded cave, located at the mountainside of Guakou Mountain, hidden deep in ancient forests. The Shengmu Cave main hole is more than 300 meters long; the bifurcation hole is 1000 meters long. It twists and slowly extended upward. Inside the cave is warm in winter and cool in summer, and the stalactites spread throughout mountain.
【Zhaogong Mountain】
Zhaogong Mountain is the main peak of Qingcheng Mountain, elevation 2434 meters. In the Qingcheng Mountain Scenic Area, the highest place is Laojun Pavilion, was 1600 meters, lower than Zhaogong Mountain. Zhaogong Mountain is about more than just scenery, beautiful landscapes, clear water, and there is a Zhao Gongming Temple worship of god of wealth.