English
Feedbacks & Reviews | About us | Contact us
Home > Destinations > Zhangye

Zhangye City is located at the northwest part of Gansu Province. It was an important city of the ancient Silk Road, and now it is an key city of the New Eurasian Land Bridge. The second largest inland river-Heihe River runs throughout the whole city. With long history, bright culture and amazing natural and human landscapes, it is also a famous ancient historic and cultural city and excellent tourist city in China. It has enjoyed the reputation as “Jiannan beyond the Great Wall” and “Golden Zhangye” since ancient times. It borders Wuwei and Jinchang at east, Jiuquan and Jiayuguan at west, Qinhai Province at south and Inner Mongolia at north. 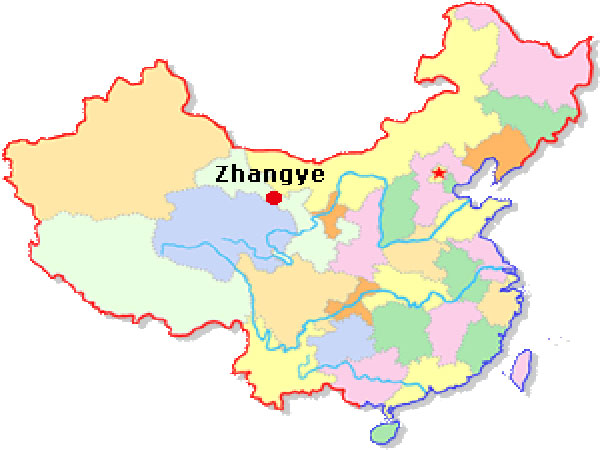 Zhangye rest on Qilian Mountain in the south, near to Heli Mountain and Longshou Mountain in the north, and Heihe River runs throughout the whole city, forming a unique desert oasis scene. Within the territory, Zhangye has flat terrain, fertile land, rich forest and food, and fragrant melon and fruit. Snow-capped mountains, grasslands, blue water, and dessert contract finely with each other, the desert has both austral charm, but also has fortress special feelings, so there is sentence "without looking at the Qilian Mountain snow, people will wrongly recognize Ganzhou (former name of Zhangye used in the ancient time) as regions south of the Yangtze River".

In 121BC, Emperor Wu set up Zhangye County. In West Wei od the Northern Dynasty, it was renamed Gan Zhou (Zhou means a autonomous prefecture). From then on, until the late Qing Dynasty, it was all name Ganzhou. In 1927, it was renamed Zhangye County again and became Zhangye City in 1985.
Zhangye is one of the Hexi Four Counties with Dunhuang, Jiuquan and Wuwei. It had been the political, economic, cultural and diplomatic activities center at northwest China for each dynasty. Zhangye used to be the capital of North Liang Kingdom, the provincial capital of Gansu. In the city, there are many historical sites such as Ming Great Wall, grottoes and ancient city.

Zhangye belongs to continental climate, featured by dry climate. The annual average temperature is 6℃. It is coldest in Jan., and hottest in September. The best time to visit Zhangye is from June to September.

♦ Spring (March to May): Spring in Zhangye is cool, the average temperature is -5 ~ 11℃. During the daytime, the temperature is generally 11 degree, but at night, the temperature might drop to -5 degree.
♦ Summer (June to August): Each year July and August is the best time to travel to Zhangye. Zhangye is a continental climate, dry and rainless, annual average temperature of 6 ℃, the coldest month is January, the hottest is July. Travel to Zhangye in summer, indisputably visiting two big attractions of Mati Temple and Shandan Military Horse Ranch first, whether riding to stroll Mati Hill (horseshoe hill), or riding swiftly in the grassland, take a broad view of Zhangye, you can see green grassland and the beauty of the golden flower everywhere.
♦ Autumn (September to October): Going to Zhangye in autumn, the best choice is to visit Danxia landform located in Linze and Sunan County. This palatial danxia landform ranked first in the country and its colored hills are the most beautiful in the country.
♦ Winter (November to next February): Zhangye has continental climate, dry and rainless, annual average temperature of 6 ℃, the coldest month is in January, the hottest is in July. Zhangye is located in the middle of Hexi corridor. In winter the wind is quite strong, and it is cold and dry in winter so do not recommended traveling Zhangye in winter.

♦ Spring (March to May): March and April alternate clod and heat is quickly, when it is cold the temperature might be 5 degree below zero and when it is hot the temperature might be 20 degree. And it is windy during March and April, suggest wearing light sweater with coat.
♦ Summer (June -August): Zhangye located in the hinterland of China mainland, it has long sunshine time, and day and night temperature difference is bigger, so travek Zhangye in summer, besides short sleeve and shorts, you also need to prepare a light coat and pullover, etc. Of course there is also very strong ultraviolet ray, so sunglasses, hat and scarf is also necessary.
♦ Autumn (September to October): If you choose to go to Zhangye after National Day (October 1st to October 7th), you need to wear long sleeve with a heavy coat. After entering in October the weather become cool so people need to wear long sleeve and coat, also have better to prepare a sweater for a rainy day.
♦ Winter (November to February): Due to it is located in the deep mainland hinterland, Zhangye is a typical temperate continental arid climate, sunshine time is long, and solar-thermal resource is abundant. Its winter is cold and summer is heat, the four seasons is distinct, and rainfall is concentrated. Recommended to wear thick cotton-padded jacket, winter coat, leather jacket, coat, hat, glove, and down jacket, such as thick warm clothes.

Zhangye is in the middle section of the Hexi corridor in Gansu province, and it was one of the four county Hexi counties in the ancient times. Zhangye is nourished by the China's second largest continental river of Heihe River, and it gave birth to the vast oasis, and therefore gave birth to the culture of the Hexi corridor. With its unique natural landscape, there is a beautiful ecological city wetland, majestic colorful Danxia landform, the most beautiful rape flowers in the northwest China, Yugur unique minority feelings, Qilian mountain desert scenery, the Gobi desert, and mountain glaciers. Zhangye has numerous scenic spots and historical sites, rich in tourism resources, the humanities landscape, and different shapes of ancient buildings which are exquisite and colorful.

♦ Zhangye Danxia National Geological Park –Zhangye Danxia is located in the northern foot of Qilian Mountains in Linze and Sunan County. Its distribution area of about 510 square kilometers, and it is provincial geological parks and provincial scenic area, 30 kilometers east from Zhangye city, 20 kilometers north from Linze County. It is domestic the only recombination region of Danxia landform and colorful hilly landscape. In November 2005 with the national geographic magazine in China and 34 large media jointly organized a poll of "the most beautiful place in China", Zhangye Danxia landform was voted as one of the seven major "China's most beautiful Danxia"; In 2009 it was awarded the "natural picturesque beauty interpretation of China's most beautiful 6 singular landscape" by the authority and guidance of the China National Geographic magazine editorial committee, and in 2011 it was praised as "ten big magic geographic wonders of the world" by the United States National Geographic magazine.

♦ Mati Temple– Mati Temple is the national AAAA level traveling scenic area, the provincial scenic area, national cultural relic’s protection units, and Chinese Tibetan Buddhist resort. 62 kilometers away from Zhangye, Mati Temple is located in the northwest valley of the Mati River. Mati Temple grottoes group digged in the period of the Sixteen Kingdoms Northeern Liang Period, about 1600 years of history. "33 days" it was built in 7 floors 21 caves with a pagoda shaped cut in the cliffs which is spectacular and amazing.
♦ Wenshu Monastery– Wenshu Monastery, located in Qilian Mountain, at the foot of the main peak Suzhulian Wenshu mountain scenic area, is a national key cultural relic’s protection unit, the national AAA level scenic spots. Founded in Northern Liang Period of the Sixteen Kingdoms, grottoes carved in the front and back Wenshu Mountain cliff. Mati Temple was built in the Tang dynasty prosperous time with a history of more than 1500 years ago.

Zhangye has rich products, and it has Wujiang River rice which had been for the royal tribute, exquisite sweet Linze jujube, apple pears, they are representatives of Zhangye specialties, enjoys a good reputation both at home and abroad. In Zhangye, woman at an early age to learn paper cutting, embroidery and other craft production, exquisite paper-cut, chic pillow, chinese-style chest covering, embroidering shoe, sheets in the hands of the ingenuity of the woman presents all kinds of things, is popular with tourists from everywhere.
Zhangye area shopping place more focus on people's south road, near people's road west, zhang ye stores, hexi shopping malls and other large shopping malls, goods variety, good quality, good service, is an ideal place for leisure and shopping.

Airport
Zhangye Ganzhou Airport
♦ Address: Shigangdun, Ganzhou District, 24 km away from Zhangye downtown
♦ Official website:
♦ Tel: 0936-8889778
♦ How to get to Zhangye Airport: due to there is less flights to Zhangye, so basically every flights has airport shuttle bus to Zhangye downtown.
Zhangye Airport is located in central Hansu province Zhangye city, which is a military and civilian combined airport. It is 4C level airport, runway models can bear the type of Airbus 320 and Boeing 737-800 and the types smaller than these. Zhangye airport navigation cities are Lanzhou, Xi'an, and Chongqing. Zhangye airport launched its maiden flight on November 1, 2011. And on May 4, 2012, Zhangye - Lanzhou - Chongqing flights officially opened.