Usually, there are 20 sergeants on a chariot, standing right and left of the chariot. They wear long coat with amour outside, leg guard, hemp head cloth. The weapons on there hand are spears amraphels, swords and halberds which are long in size. According to the arms discovered around the chariot, Sergeants one left and right are all take long weapons, which means the division of work of the sergeants on each side are not so clear. Except for the terracotta sergeant, there are also military officer on the chariot.

Standing archer is a special arm of the services. They were unearthed from the east part of pit 2. The standing archer together with kneeling ones form a crossbowmen battle formation. The standing crossbowmen are standing at the out circle of the batter formation. They wear light coat armor, bound the hair up, warped square opening shoes and tied with leather belt, which make they feel very flexible and comfortable. The gestures of them are just as the description in Wu Yue Chun Qiu: the left foot’s toe face forward while the left foot vertical to the left foot; the left hand hold the bow, and right hand like holding a baby. The gestures show that the shooting skills had reached a high level in Qin Dynasty. The gestures also were passed down inherited by later generations.

Just like Standing crossbowmen, the kneeling ones also were unearthed in Pit 2. With crossbow, they formed the crossbowmen battle formation. The kneeling crossbowmen are kneeling in the center of the formation. They wear coat with outside armor, also wear the same shoes with standing ones. They kneel on right leg and bend the left leg. For the statuary art of the kneeling archer, one precious point is that even the stitches of sole had the craftsmen meticulously carved, which reflects the extremely strict realism spirit at that time and also the later generations could feel a very strong flavor of the life in Qin Dynasty. 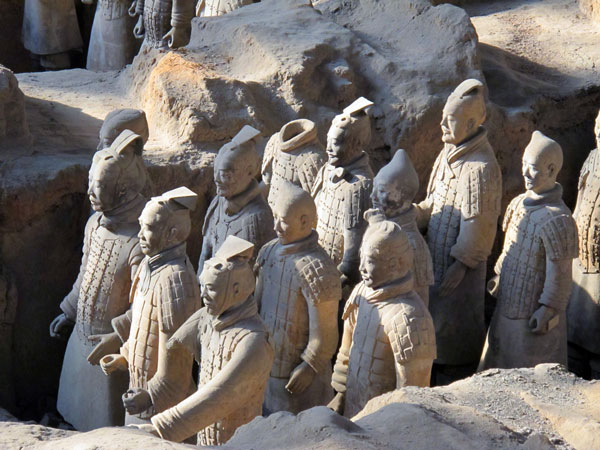 Terracotta Warriors are normal soldiers. The average height of them is 1.8 m. They are the main part of battle formation. Most terracotta soldiers are terracotta warriors. According to the coat they wearing, they could be divided into filed robe warrior and armor warrior. Filed robe warriors are standing at the out circle of the formation as they are light and flexible, while armor warriors standing in the center. 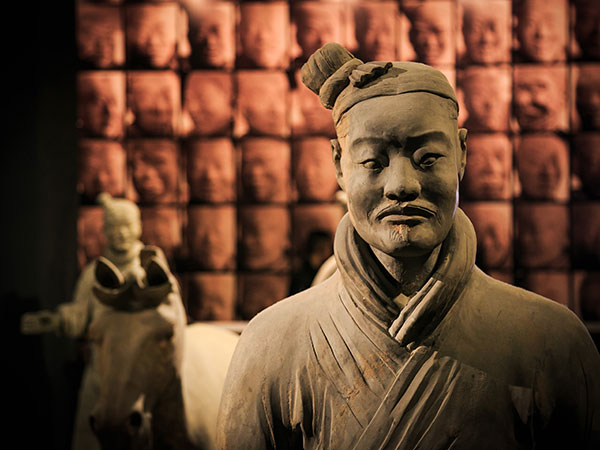 Unearthed from Pit 1 and Pit 2 and there are 116 terracotta cavalry. The dress of cavalry is obviously different from infantry and chariots soldiers. They wear circular cap, tight sleeves robe, tight mouth even pants, ankle boots, shot and small armors. One hand holds the rein and the other hand holds the bow. From the special dress, we can find that agility is a basic requirement of cavalry. The cavalry statues fond here are also the earliest material object of cavalry in ancient time.

The terracotta chariot drivers were unearthed from the three pits. They wear long robe with armor and high hat on their head. Gardebras cover their wrist. Legs also wear legguards. Their arms were in the gesture of driving the horse chariot. As the chariot’s lethality is very strong and hard, the driver’s statue in a wall is very important. 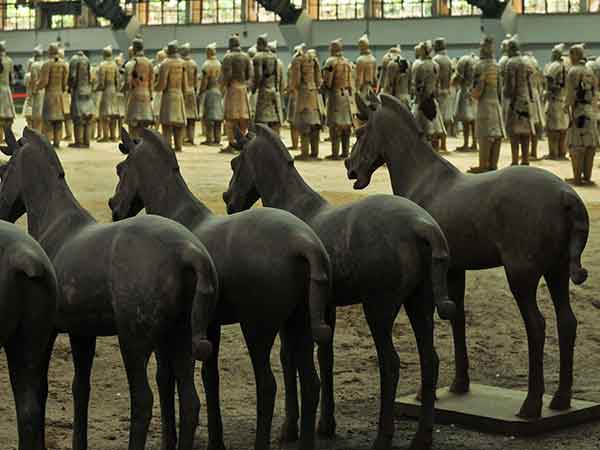 There are few statues of Generals you can find in the pits, less then 10 of them. The general could be divided in to two types: Robe General and Armor General. The common characters of them are that they all wear He Guan, they are all tall and strong, and their temperaments are conspicuous. The robe generals’ dress is simple but with a cockade decorated on the chest, while the armor general has 8 cockades on chest, back and shoulders. The decoration and dress show their level, identity, and majesty in the army.