How was Qin Terracotta Warriors Discovered?

The Qin Mausoleum had not been discovered for so long and just had some mystery stories about since it was excavated. How was Qin Terracotta Warriors Discovered?  Hadn’t any one saw it before 1974? You will find the answer in this page.

There are no records of Qin Terracotta Warriors in the history, but when excavated the pits, archaeological workers found the soil layer on the tomb were punched through. As the tomb of early Western Han Dynasty found in Pit 1, the tomb was dug just in the wall between pits. And the couple tomb of early Eastern Han Dynasty in the Pit 2 was just dug on the body of a terracotta warrior and a horse. It shows that as early as Western Han Dynasty, the earth above the mausoleum had lay waste and they did not know what buried below and so they dug tombs here. From late Ming and Early Qing Dynasty to modern times, there was graveyard of local villagers. The famers said that their forefathers used to see monsters when digging tombs and called them “Wayeye”. An old man said a story that when he was 10 years old, his father dug well at this land and found a monster as tall as a man on the wall of the well. The well was full of water in the first several days but it was dried up later. His father thought it was the monster’s fault and dried the terracotta warrior under sunshine but there was still no water in the well. And then, his father hung the terracotta on the tree and whip with peach tree strip and at last broke it into pieces with stick. 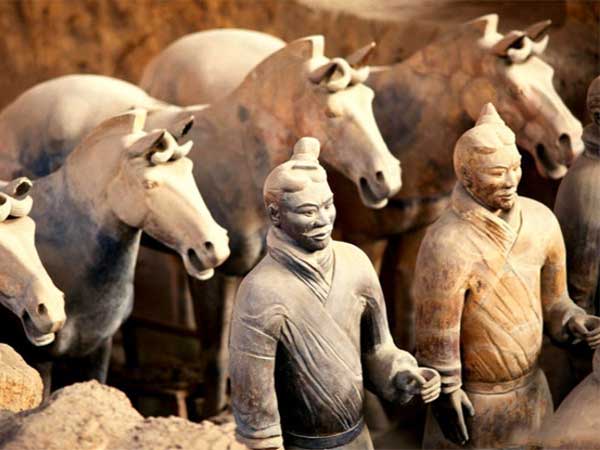 1.5 km away from the east part of the Qin Mausoleum, there is a little village-Xiyang Village. At the south part of Xiyang Village, there used to be a persimmon forest. There were many tombs and stones. In March, 1974, Yang Zhifa, Yang Peiyan and other famers begin the drilling engineering for water on this land. When they dug about 2 m deep, they found burned soil layer. And in 3 m deep part, they found broken bodies of terracotta warriors. For about 4-5 m deep, they found bronze weapons, and 8 broken terracotta warriors. They stopped the drilling and reported to the local authorities. The first expert of archaeology came here was Zhao Kangming. Lin a journalist of the Xinhua News Agency came back to Lingtong at that time and he reported the big discovery on People's Daily. On July 15th, 1974, Provincial Administration of Cultural Heritage sent archaeology team to excavate the terracotta warriors.

The discovery of Qin Terracotta Warriors is very important for study the history of Qin Dynasty, and it is also a treasure of the bright Chinese culture and history.