On December 26, 2012, the Beijing-Xi'an High-speed Train which links Xi'an North Railway Station to Beijing West Railway Station was officially opened. You just need to spend about 4 hours 40 minutes by this train from Xi'an to Beijing; hence, you can come and go Xi'an or Beijing in one day. The operation mileage of the Beijing-Xi'an High-speed Train is about 1144 km. The opening of this high-speed train greatly shorten the distance from Xi'an to the northern cities like Beijing, Tianjin, Shijiazhuang, etc... People can eat Chinese hamburger in Xi'an in the morning, then go to Beijing to see the Forbidden City at noon, and at last listen to crosstalk in Tianjin on evening. 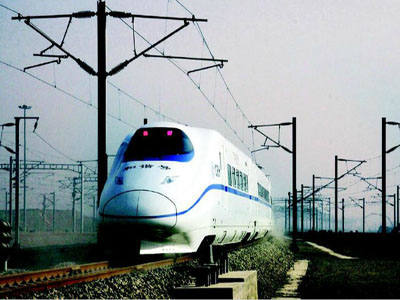 •China's Initial High Speed Trains
China’s initial high speed trains were imported or built under technology transfer agreements with foreign train-makers including Siemens, Bombardier and Kawasaki Heavy Industries. However, Chinese engineers re-designed and further improved the internal components of the train in order for the train to run at much higher speed. China currently holds close to 1,000 local and international patents for high speed rail technology. Foreign trainmakers continue to sell certain components but no longer supply train sets for China's high speed trains Most of the China Railway High-speed (CRH) train components are manufactured by local Chinese suppliers, with only a few parts imported.

•Business Train Car
Business Carriages (CNY 1624-1628 per seat) are generally the third one of the train.

Twenty four red seats with 180 degree turning and bed transforming functions are equipped in. Three seats in a row divided into single seat and twin seat two kinds. A screen to prevent passenger disturbing from others ensures a private room for each other.

Foldable dining table and a 12 inches screen are equipped for passengers. During the driving time, people can see the movies and listen to the music as well as do some researches of the destinations by the screen.

Four seats in a row which is narrower than the space in the business train cars. First class seat is equipped with flexible reading lamp and passenger can adjust slope of the seat too.

Five seats in a row with twin and triple seats. It is the most popular kind of seats among Chinese people, so it will be comparative much hard to get one ticket than other train cars.

Four seats with a dining table

•Washing Room
Washing room will be immediately clear after the passenger finish to use it. Washing room locates at both end of the train car.