What to Buy and Eat in Turpan

Turpan diet is very rich, and Uygur delicacies and Muslim food are everywhere. Guanghui Street is characteristic of Turpan famous snack street, where tourists can enjoy delicious foods and satisfy their taste buds. And Turpan grapes are famous in the north to south in China. Because the Turpan grape production is high, so grape processing foods are very much (wine, Museles, raisins, grapes water, etc.), which are desirable. 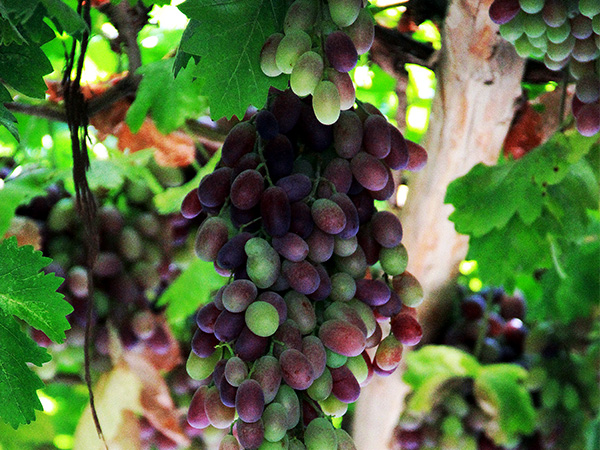 1. Pamirdin
The stuffing of Paermuding is the same as Samsa(baked bun), it is baked pie with lamb, carrot and onion inside. Pamirdin is made by a little fat diced meat of sheep, onion, egg, salt, pepper, cumin powder mix into a paste and then wrapped and baked into the tandoor. Pamirdin is crisp with much tender meat oil, when you are eating, the steamed stuffed bun skin like melting in the tender meat.
2. Museles
It is the southern Xinjiang Uygur people’s favorite drink. The Uighur home-made wine generally called “museles” is still being brewed by households in many villages. Unlike wines west of Xinjiang, the brewing of museles requires crushing of local varieties of grapes by hand, then boiled with amount of water equal to the juice and desired portion of sugar, until the volume of the mixture is down to the original volume of the juice, then stored in clay containers.
3. Pilaf
Pilaf, in Uygur language called “polo”. Its pattern is numerous, the Uighurs in addition to make with lamb pilaf, also with horses, cows, snow chicken, pheasant, chicken, goose meat to make pilaf. In addition, pilaf can be also made from the dried fruit such as dried apricot, almonds, raisin, peach to make pilaf, which are sweet pilaf or non-meat pilaf.
4. Kebabs (the roast mutton)
Uygur folk traditional skewers, is the flavor snack in the street, guests can also taste on the table. Authentic skewers its color is dry and yellowish, with delicious tasteful spicy, which is neither greasy and have the smell of mutton, and meat is tender and tasty.

Travel to Turpan, tourists can't miss the Turpan grapes. Turpan grapes have dozens of varieties; good quality seedless grapes are white grapes, red grapes, horse milk, Manaizi grapes such as more than a dozen varieties, notably the seedless white grapes, it is the most expensive. Turpan Manaizi grapes is different with other ordinary grapes, its shape is cylindrical with more branch, mostly white and green, pick a grape and put down in the mouth, it is sweet and juicy, crisp and refreshing, which is quite good.

Turpan old city farmers market located at the centre of Turpan city of south Old Town road, is the largest commercial and agricultural and sideline products trading market in Turpan, is also one of the top ten farmers market in Xinjiang.
Turpan Department Store is located in Turpan Gaochang Road and Old Town Road intersection, belong to the downtown area, the surrounding shopping malls, food, entertainment, recreation ground, transportation is convenient, is a famous comprehensive commercial buildings and shopping center in Turpan region.
In addition to the above Turpan shopping guide, there are also more shopping malls in Toksun County, and there are more shopping mall, of which are mostly located in North Street like Western Region Trading Market, Tianshan Mall, Frontier Friendship Store, etc. The market price is cheaper than Turpan city, but there are also fewer varieties.