Turpan, an oasis city, is located at the southern foot of Bogda Peak and in the center of Turpan Depression. Because of the drastic 5,000-meter difference in height between the mountain tops and the bottom of the depression, the scenery too, varies greatly at different altitudes from perpetual snow at the summits to green oasis at the foot of the mountains. After a long journey from the desert, tourists are always fascinated by the extraordinary beauty of the depression with its snow-capped mountains, salt lake, and particularly the Flaming Mountains. 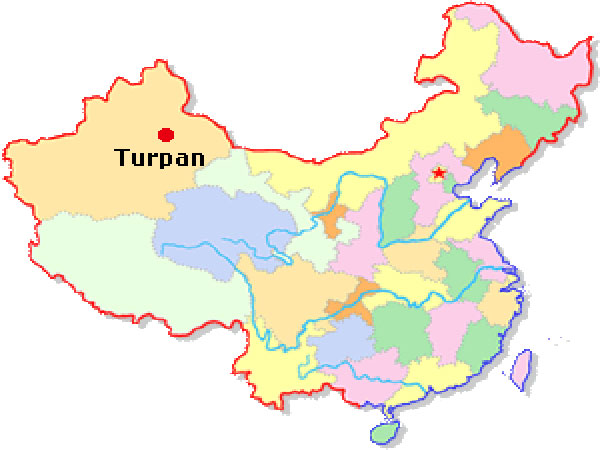 Thanks largely to the people here, this relatively small and economically unimportant place has blossomed in recent years, attracting numerous tourists and travelers, who come here to sample the easy going pace of life and to see the desert. The city itself, despite the intense heat, has been made livable by the construction of vines and trellises, providing avenues of shade from the sun. There are few cars here and donkey cart is the most common and popular mode of transport. The heat means that no one is in a real hurry to get anywhere and it is pleasant just to sit in the shade with a cool drink and watch the world go by.
Turpan is synonymous with grapes and wine which is the area’s most famous product. Despite the stifling heat and dry climate, delicious and succulent grapes are cultivated here due to the ingenuous irrigation system installed over 2,000 years ago that transfers water from the glaciers. Visitors go to the Grape Valley to sample the juicy fruit at its best.

Area code: 0995
Zip Code: 838200
Area: The area of Turpan is about 70,000 square kilometers.
Geography: Turpan region is located at the basin in the southern side of the Bogda Ranges and bordering with Hami in the east. It has a total area of 69,700 sq. km. The basin is surrounded by high mountains, while inside of it, there are many hills and mountains with small basins alternate with one another. The lowest point is in the Aydingkol Lake with 155 m below the sea level, where there is still having a small amount of water in it. Melting snow from the Tianshan Mountain nearby provides a precious underground water resource for the region, thus the ancient Karez Irrigation System made, very interesting.
Population: According to the official statistics in 2008, the total population in the Turpan region is 606,758. 70% of the population is Uighurs and they mak e a concerted effort to make visitors feel welcome. Other minorities include Han, Hui, Kazak, Russian, Manchu, Zhuang and Miao.
Administrative Division: Turpna is divided into 1 city and 2 counties administratively.
Climate: Located in the Turpan Basin, it has long been known as "Fire State" or "Land of Fire" for its extreme summer heat. This is due to it being in the second deepest inland depression in the world.