Turpan, located in the Turpan Basin, has long been known as "Fire State" or "Land of Fire" for its extreme summer heat. This is due to it being in the third deepest inland depression in the world. It surpasses all other Chinese cities by having the hottest weather, lowest altitude, driest climate, and sweetest fruit.
The Turpan Basin has a hot and arid continental climate in which the precipitation is far less than the potential evaporation. July is the hottest month with an average high temperature of 39.7°C (103.5°F) and a maximum as high as 48 C.  Because of its climate, the area has been nicknamed, "the Oven".  January is coolest with an average low temperature of -2.2°C (28°F). Monthly rainfall is highest in June (3.3 mm) and lowest in February (0.2 mm). The annual average precipitation is less than 2 cm and the potential annual evaporation rate is 3 m. Generally speaking, the area receives little rain during summer but regional heavy rain sometimes causes flooding.

The city of Turpan's climate is not as harsh as many people imagine it to be. The water supply primarily comes from underground, fed by the melting snows in the mountains.
The best time to visit Turpan is Autumn when it has comfortable daytime temperatures and cool nights. Moreover, various fruits ripen and the air is sweet with the scent of fragrant fruits during this time of the year. 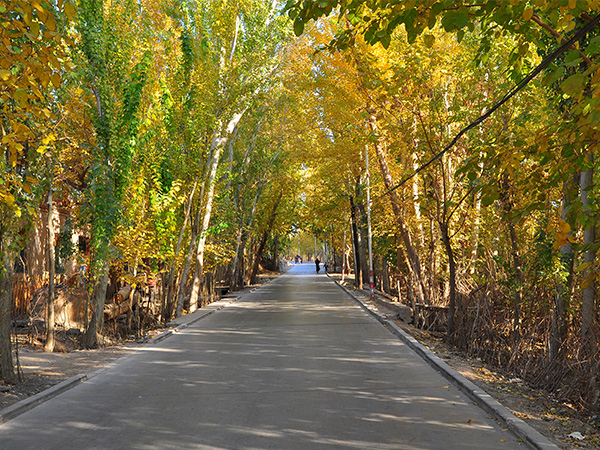 * Spring does not really begin until March and continues until May. Unpredictable weather conditions, strong winds and arid days make it a poor time to visit.
* Summer begins earlier than in any of China's other inner provinces, in June. Summer is extremely hot particularly for the area around the Flaming Mountain with some places reaching 48°C. Generally speaking, the area receives little rain during Summer, but heavy rain in the mountains sometimes causes flooding.
* Autumn is no doubt the best season to visit Turpan. It has clear skies invigorating air and the winds are milder in this season. The grape harvest season, July, August and September, is the best time for tourists to visit.
* Winter in Turpan is very cold and dry.
Always be prepared if you visit during the Summer months, carry plenty of drinking water, use Max SPF sunscreen, Lip-balm and a good hat!  An umbrella is good anytime, to protect you and your camera; this place is picturesque!