Shenzhen North Railway Station is the only Principal Station in Shenzhen. It is located in Minzhi Street, Longhua New District, Shenzhen. It covers an area of 2.4 million square meters. Shenzhen North Railway Station now becomes the most core passenger station of this city. It has the largest construction area and the most versatile large integrated transport hub in China. It has become a landmark projects new house railway station. 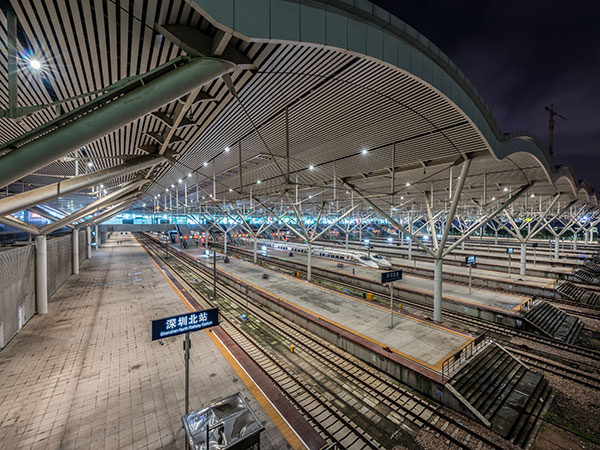 
Shenzhen North Railway Station was designed with 20 tracks, 11 passenger stations countertops. The station house was divided into the main station house and platform with no poles. The total construction area of it is 182,000 square meters. Master house is 413 meters long from east to west, 208 meters wide from north to south, with a total height of 43.6 m. The maximum span of steel is 86 meters and the highest cantilever structure is 63 meters (maximum cantilever structure for domestic housing construction area). The construction of the station cost about 65,000 tons of steel.

The station is divided to layers of ground station, elevated mezzanine, elevated waiting layer, and business layer earmarked. It is built in a beautiful and innovative structure with a lot of new materials and new technology. It has become a landmark of Shenzhen City.


Shenzhen North Railway Station is the central railway terminal in Shenzhen, as well as the most important part of the Shenzhen railway transport.

The station connects Shenzhen-Hong Kong-Guangzhou Passenger Line and Xiamen-Shenzhen Railway, and interface with the Metro Longhua Line, Central Metro Line, Guangming Line, bus stations, taxi station and other social vehicles, forming a large-scale integrated transport hub with port function. It is the country's major regional railway passenger hub, also has the currently maximum building area. There are 11 platforms and 20 tracks. It only takes just 16 minutes to Hong Kong West Kowloon by the Guangzhou-Shenzhen-Hong Kong high-speed passenger trains, only 35 minutes to the Guangzhou South Railway Station, which makes the passengers experience the convenience of the intercity transportation.