How to Get to Yiwu from Shanghai 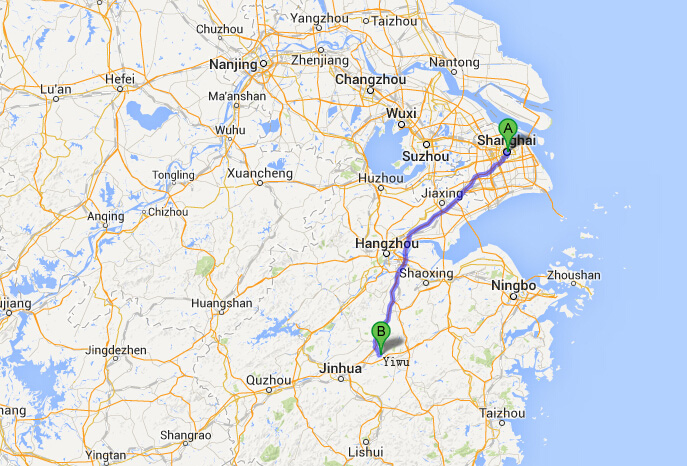 Yiwu is located 100 km south of the city of Hangzhou, the capital of Zhejiang Province. And it is about 285 km from Shanghai downtown. The nearest city to Yiwu is Dongyang. The area, as in most of the Province of Zhejiang, is in a mountainous region. The city is famous for its small commodity trade and vibrant free markets and is a regional tourist destination.


How to Get to Yiwu from Shanghai?

►By Bullet Train (recommended)
Nowadays, there are bullet trains connecting Shanghai and Yiwu, which makes Yiwu more convenient to get access to from Shanghai than before. It only takes about two hours and a half traveling from Shanghai to Yiwu by bullet train, so this is a high-recommended way, for it cost less time and charge a reasonable price. But the ticket of bullet train is so hot that it is hard to get, so one should buy the ticket in advance.

► By Coach
If you take coach, it is available at various long distance inter-province bus stations and leaves about every 1 hour. Coaches at Shanghai South Bus Station have many coaches leaving for Yiwu. Some stations got more schedules than others. Make sure you know which station you are going to. Again, the hotel staff should be able to give you directions. You may want to go to either the general station (located at No. 1662 of Zhongxing Road) or Pacific Station (located at No. 710 Hengfeng Road.) Actually buses are just fine if you don't get car sick. The journey on a coach would take about 4 hours.