English
Feedbacks & Reviews | About us | Contact us
Home > Destinations > Qufu

Qufu is a city in Shandong Province, China. It is located at 35° 36' northern latitude and 117°02' east, about 130 km south of the provincial capital Jinan and 45 km northeast of the sub-provincial city Jining. Qufu has an urban population of about 60,000; the entire administrative region has about 650,000 inhabitants. 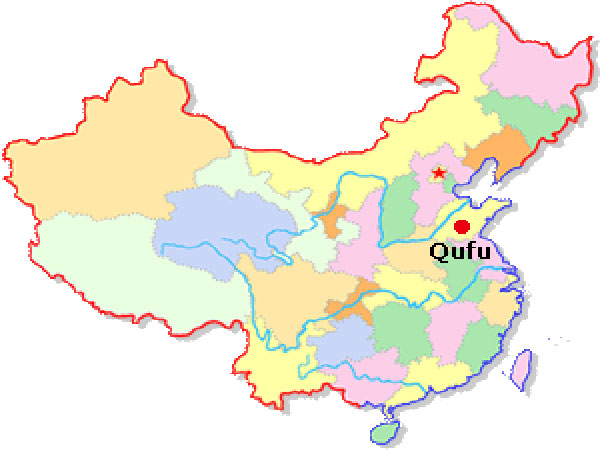 Qufu is the birthplace of Confucius; it served as the capital of the State of Lu during the Spring and Autumn Period. Qufu contains numerous historic palaces, temples and cemeteries. Many of the major cultural sites in the city are all associated with Confucius, such as the three sites of the Temple of Confucius, the Cemetery of Confucius, and the Kong Family Mansion. The Qufu complexes of monuments have been listed as UNESCO World Heritage Sites since 1994. Qufu also played a minor role in the Yanzhou Campaign of the Chinese Communists in 1948.

In the new era, the people of Qufu have made a great blueprint about economy and society development. The main point is that tourism is the head, the industry is the center, and the agriculture is the base and so on. In a word, the purpose is to make Qufu become a historic and cultural city, a beautiful city of tourism, the Confucian cultural center in the world.

When we open the atlas of China, we can see Beijing-Shanghai Railway and No. 104 National Road running through Qufu from north to south, Yanzhou-Shijiusuo Railway and No. 327 National Road from east to west. Qufu is an important hub of communications in China, as well as world-renowned city.

Geography : Qufu is located between the River Si and the River Yi in the southwest part of Shangdong Province. To the north and east of Qufu are Mount Tai and Mount Yimeng, while to the south and west are Nafu and the Great Plain of Pingye.

Population: The urban population of Qufu stands at 60,000. This figure extends to 650,000 people when incorporating the surrounding countryside of its administrative region.

Administrative Division: In comparison to China's large urban centres, Qufu is 'off the beaten track'. For many, of course, this in itself is an attraction. True, there are many townships like Qufu dotted throughout China. What distinguishes Qufu from any other provincial town, however, is a philosopher who lived two-and-a-half thousand years ago.

Confucianism, the ancient Chinese art of etiquette, originated in Qufu, the birth place of its founder, the "sacred master of literature", Confucius (kongzi). This was the place where Confucius gave his lectures and disseminated his thought, where he taught his students, who were later to spread his initially little respected ideas, and the place where he was to die. It is also the place was Confucius' most well known disciple, Mencius (mengzi), was born.

Confucianism, a philosophy rather than a religion, was a series of codes for China's population to abide by. It was hoped that by following such a conduct of benevolence the population would harmoniously live together under the traditional Chinese system, a feudal system of altruistic despotism. The populace were expected to obey   their seniors (hierarchical paternalism), to be selfless and strive for the common good. Temperance was placed as a primary virtue. The emperor and those in positions of power were also expected to follow the Confucian Principles of Government, thereby lessening the Emperor's claim to his divine right. Confucius suggested that the governors should "rule the people with love and train people to learn good manners". Confucious dreamed that by so doing, the country would be as strong as his ideal, the Western Zhou Dynasty when "all orders were issued by the emperor".

Confucius was also highly critical, following the accepted thought of his time, of the people that he considered lowest on the hierarchical ladder, the merchant class. It is fairly ironic that today Qufu is swarmed by thousands of vendors.