There are a lot of train choices when traveling from and to Qinhuangdao. Many travelors to Qinhuangdao are coming from either Tianjin or Beijing. Both cite are a short two hour ride on one of CRC's (China Railway Corp.) by 'D' or 'Dong' trains. 'T', 'K', and 'numbered' trains also make daily journeys through Qinhuangdao, but they are much slower (4-6 hours to/from Beijing) and rarely worth the savings for western travelers who value time over cost. 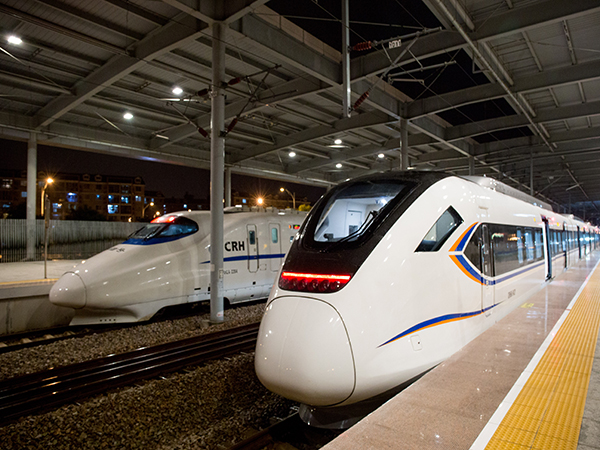 If you want to go to Qinhuangdao by air, you need to get off from Beijing Capital Airport, then you can take Inter-Provincial Bus. Take note of the timetable.

Long distance buses are common in China, and Qinhuangdao is no exception. Buses depart from a central station near to the central train station in the Haiguan District of Qinhuangdao. Bus tickets to and from Beijing often charges as much as train tickets, but the departures are more frequent. There is a direct bus from Beijing International Airport (PEK) direct to Qinhuangdao. It takes roughly 4 hours to arrive (depending on traffic conditions), and tickets can be bought directly at the bus station at the airport.

Qinhuangdao is a relatively small city by China standards. However, due to its location on the water, the city tends to sprawl in a linear fashion along the coast from Shanhaiguan to Beidaihe, thus making buses and taxis necessary means for getting around.

Public Buses are usually an ideal way to get around the city. Containing bus routes on them, city maps can be obtained from kiosks near to train stations or the central bus stations. Buses charge between 1 and 2 yuan for a single ticket ride. However, the low cost means that buses are always overcrowded, and occasional pickpockets make it essential to protect your personal belongings.

Taxis are inexpensive and abundant, thus making them the preferred means of transport for travelers. Compared with public buses, taxi is more expensive. If you want to take a taxi in the city, be sure you can confidently communicate where you want to go before you get into a cab as most of the drivers in Qinhuangdao can not speak English, but many of them can read Chinese. You can ask somebody to write down the place where you want go in Chinese on a card, and show this card to taxi driver. The best approach is to have a valid phone number for where you are going, or a phone number for a contact who can communicate with the driver in Chinese, should there be a problem.