English
Feedbacks & Reviews | About us | Contact us
Home > Destinations > Shaanxi

Pingyao Gucheng Railway Station , Chinese name 平遥古城站 (Chinese Pinyin: pīng yáo gǔ chéng zhàn). It is a rather new high-speed railway station as it was only just fully accomplished and set to service in July, 2014. With the scale of 2 platforms and 4 railway tracks, though small, it is a quite efficient station en route to Pingyao journey. 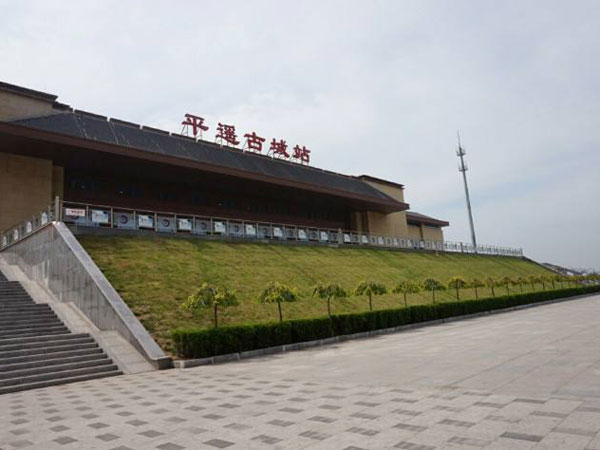 Pingyao Gucheng Railway Station is located southwest to the Pingyao city downtown. The distance between the railway station and city downtown is around 10 km.

The price in the above chart is second class seat price as it is the one largely chosen by both Chinese and foreigners.

Train Schedule above is for your reference only. Please check the ticket information including the tickets fares at the railway station or by your TCT tour advisors separately.

How to get to Pingyao Gucheng Railway Station from City Centre?

By Bus
You could take No.103 bus goes from the Pingyao Regular Railway Station in city downtown to Pingyao Gucheng Railway Station. The bus starts serving at 7:00 and close at 8:52 every day. The frequency is 13 minutes per bus. The bus fare will be 3 yuan.

By Taxi
Alternatively, you could take a taxi from city centre to Pingyao Gucheng Railway Station which is much more efficient compare to the bus that goes around another extra 20km before it reach the station and will cost you around 30 yuan.

How to get to Pingyao Ancient City Site from Pingyao Gucheng Railway Station?

By Bus
You could take the No.108 bus to get there, if you have plenty time. Though time consuming as it has to go through many other stops before it get to its final stop which is the Pingyao ancient city and the whole trip stretch up to 28 km, it is the cheapest way for the bus fare is just 1 yuan. The bus starts running at 7:00 and close at 20:26 every day. The frequency is every 15 minutes per bus.

Another thing you should be aware of is that the No. 108 bus has two different lines, one line set to the south gate of the Pingyao ancient city while the other heading to the north gate of the Pingyao city. The north gate is comparably having more restaurants and hotels and shops near it rather than the south gate. You could choose to get on either of them according to the location of the hotel you had booked or your preference.

By Taxi
Alternatively, you could take a taxi at the station to Pingyao downtown which will cost you around 30 yuan.