English
Feedbacks & Reviews | About us | Contact us
Home > Destinations > Ningbo 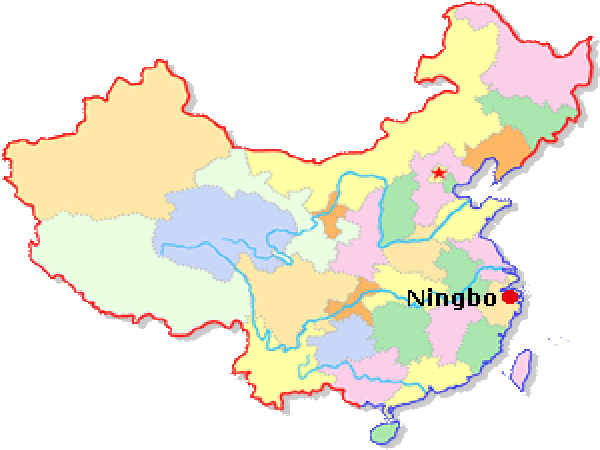 Ningbo, also called “Yong” for short, lies in the middle of the coastal line of the Chinese Mainland and in the South of the Yangtze River Delta, enjoying the most developed economy in China. It is the sub-provincial city of Zhejiang Province, and is also the second largest city in Zhejiang.

Ningbo is really a famous historic and cultural city in China. It is the birthplace of the first light of the 7,000-year-old Chinese civilization and Hemudu Neolithic Culture, and where China’s existing oldest private library is located. Also, it is the key place of the East Zhejiang School in Ming Dynasty and Qing Dynasty in Chinese history.

In recent years, Ningbo has completed its public culture and sports service system by vigorously building the 15-minute cultural activity circle to satisfy the ordinary people’s requirement for cultural life and sports around their residential areas. The Three-River Cultural Corridor shows Ningbo’s new look as a city attaching great importance to culture.

Ningbo people attach great importance to education. From Tang to Qing Dynasty, altogether 2432 people passed the examination for imperial scholars and 12 of them won first places. In modern time, many first class scholars, scientists and artists of China are from Ningbo. Some of them are even well-known in the world. 94 academicians of Chinese Academy of Sciences and Chinese Academy of Engineering Sciences are of Ningbo Origin, which is No. 1 among all cities in the country.

Climate
Ningbo has a subtropical monsoon climate, featuring mild temperatures, moderate humidity and distinct seasons. The annual average temperature is about 16.4℃, with hottest month, July (28℃ in average) and coldest one, January (4.7℃ in average). The no-frost season lasts 230-240 days a year. The annual average precipitation is around 1,480mm, of which the precipitation in the months from May to September accounts for 60%. The average annual sunshine time reaches 1850 hours.

Economy
Highly developed private economy is the most distinctive feature of Ningbo, along with a major source of “Vitality of Ningbo” and local market mechanism.

Ningbo has become the most dynamic city in local economy among coastal cities in the East. It has achieved great successes in many fields and been a major base of advanced manufacture in China. It is one of the three major producers of electronic appliances, 12.5% of air conditioners and 33% of small electronic appliances in China are made in Ningbo.

By the end of 2009, there are some 114,400 private enterprises in Ningbo, self-employed over 274,600. 135 industrial goods produced by 103 enterprises respectively rank the first places among the same products in China regarding to their outputs and sales volume. 20 brands enjoy the Famous Brands of China and 61 products have been awarded the title of Top Products in China.

Transportation
Ningbo is the transport hub of east Zhejiang; it pay more attention to form the coordinated development of the land, sea and air transport network by the port as the leader, railway, highway, water transportation as well as civil aviation.

•Highway: highway construction is a highlight of Ningbo transportation. With the completion of hangzhou bay sea-crossing bridge, the time from Ningbo to Shanghai from the original 4 hours shortened to 2 hours.

•Railway: Ningbo has built railway network all over the country; it has become an important railway hub in east China.

•Aviation: Ningbo Lishe International Airport has not only airlines to China's main cities, like Beijing, Shanghai, etc..., but also has a few airlines to overseas cities.