Famous Landmarks in are considered the Name Card of Lijiang, like the Lijiang Old Town, Lugu Lake, Jade Dragon Snow Mountain, etc. ancient and new. They are somehow, represent a certain character or role Lijiang played to the world. Come with Top China Travel, to witness and appreciate those famous Lijiang Landmarks.

Lijiang Old Town
Lijiang Old Town, which is perfectly adapted to the uneven topography of this key commercial and strategic site, has retained a historic townscape of high quality and authenticity. Its architecture is noteworthy for the blending of elements from several cultures that have come together over many centuries. Lijiang is world renowned as an ancient town built in a simple and artistic style and scientifically laid out. It was listed as a national historical and cultural city in 1986. 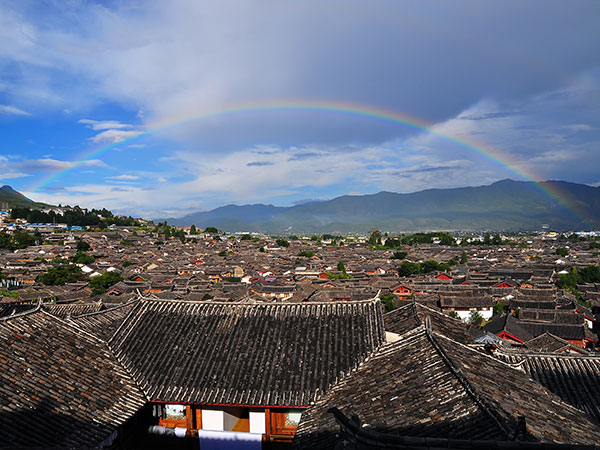 Lijiang is favored with plentiful sunlight, an east wind and clear spring water, which flows in three streams and reaches every family. The streets are paved with the local stone slabs, which do not get muddy in the rainy season and are free of dust in the dry season. Many stone bridges and arches in the city were built during the Ming and Qing Dynasties and orderly roads and lanes extend to four directions from the central square. Residential houses are made of timber; most have a screen wall in front and some have a quadruple courtyard, in which local people plant many flowers.

Lugu Lake
Lugu Lake is a plateau lake with a total area of 52 square kilometers, 2,685 meters above the sea level. The average depth is 45m, and the deepest point being 93m. The lake remains an uncontaminated plateau lake with the crystal-clear water. It is embraced in green mountains. On 25th July of each lunar year, they will gather at the foot of the mountain for a great sacrificial rite. 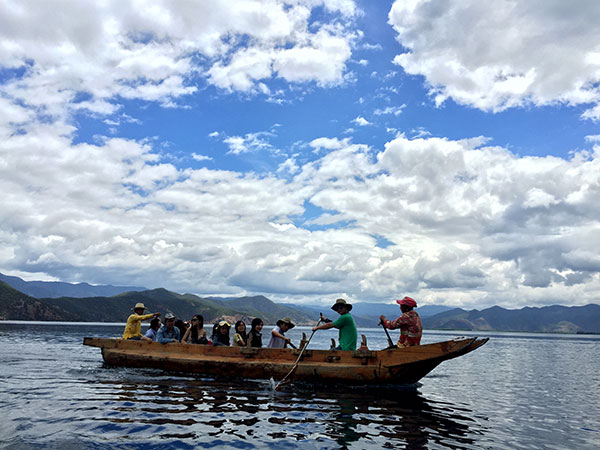 The pretty and graceful Mosuo girls, the ancient and natural canoes and the pleasant fishing songs are considered to be the three most enjoyable things on the lake. The Mosuo people have their own ways and customs, and still retain some remnants of the matriarchal society. Men and women are not bound by marriage, each living at one's mother's home. Men work at home during the day and spend their night with the women they loved in their homes. Children are under the care of and supported by their maternal families. Fathers do not live in the same family with their children and women so that they are not bound up with their women financially in their production and life. 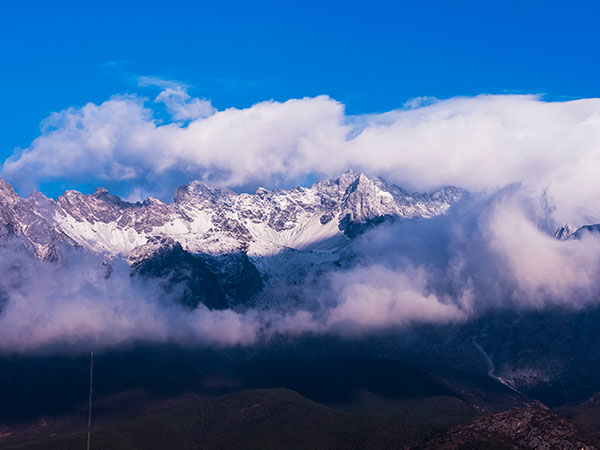 The mountain has more than 50 species of azalea, 60 kinds of primroses, eight species of poppies and 20 lilies, four species of peonies, five camellia, 50 species of rough gentian, and six kinds of flowering crabapple. From April to June the azaleas turn the mountain into a riot of brilliant color. And in autumn blue rough gentian flowers cover her marshlands. She is decorated with blooming flowers 10 months of the year. She is home to a rare tea - Wild Snow Tea -which the Naxi insist is good for high blood pressure. She is also a sanctuary for animals, many of them rare animals that live at different temperature levels.

Tiger Leaping Gorge
Tiger Leaping Gorge is a canyon on the Yangtze River or the Golden Sands River, located 60km north of Lijiang. Around 15km in length, the canyon is located where the river passes between Jade Dragon Snow Mountain and Haba Snow Mountain in a series of rapids under steep 2000m cliffs. Legend says that in order to escape from a hunter, a tiger jumped across the river at the narrowest point, still 25m wide, hence the name. 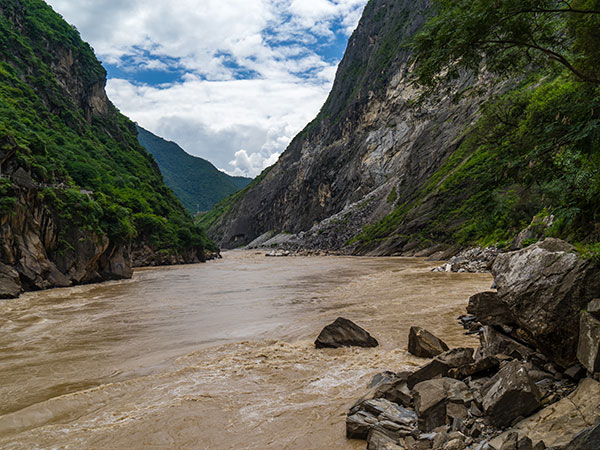