English
Feedbacks & Reviews | About us | Contact us
Home > Destinations > Leshan

Train from Leshan to Chegndu 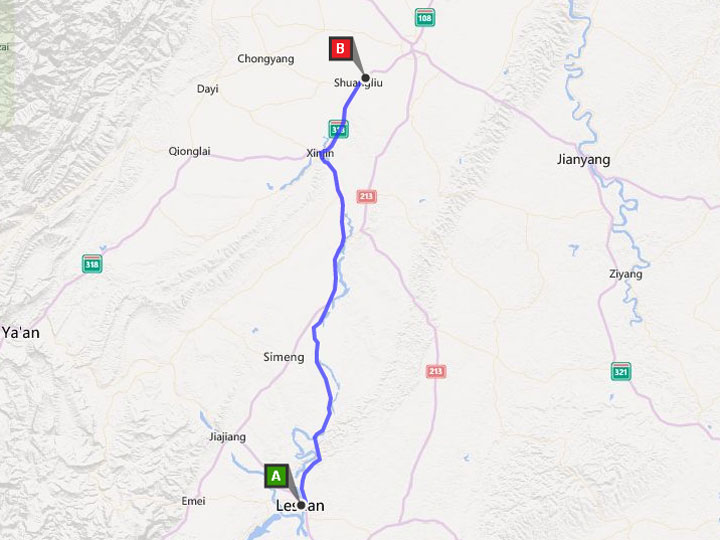 A-- for Leshan
B-- for Chengdu

Leshan station was opened on December 20, 2014 with a Chengmianle passenger transport line, launch inter-city trains to Chengdu, Mianyang, Jiangyou, and Mount Emei. After the project has been completed, it is of great significance of integrating Leshan into Chengdu half an hour living circle and economic circle, speeding up the construction of circular tourism economy of Chengdu, Leshan, Mianyang and Deyang, nowadays, take a train from Leshan to Chengdu needs only 1 hour or so.
Since then, traveling from Leshan to Chengdu or vice versa only takes 1 hour or so, which is convenient than before because the nearest train station is Emei Station which is 31 km from Leshan city in the past.
The first character of train number has special meanings.
G–High-Speed Train
C–Intercity EMU Train
D–Electric Multiple Units (EMU) Train
Z–Direct Express Train
T–Express Train
K–Fast Train
Four-digit Number Train - Regular Speed Train
L–Temporary Train

1. Booking an original train is easier than booking a passing-by train. You can book a train ticket 10 days in advance at most. Above train schedule and fares are just for your reference, while they may change over time, you need to check them again.

3. In China, taking a train is a comparative cheaper way to cut down the travel cost. While correspondingly, the comfortable level is lower than by air.
Luggage: you need to take the luggages by yourself and keep an eye of them on transporting time, no luggage-checking service on the train
Carriage: it may be crowded when in the domestic travel seasons as well as summer holidays.
Related Information
►More transportation information : Leshan Transportation►More travel information : Leshan Travel Guide►Recommended China Tours from Chengdu to Leshan:  6 Days Sichuan Tour to Leshan and Mt.Emei
(Destination: Chengdu-Leshan Giant Buddha-Mt.Emei)