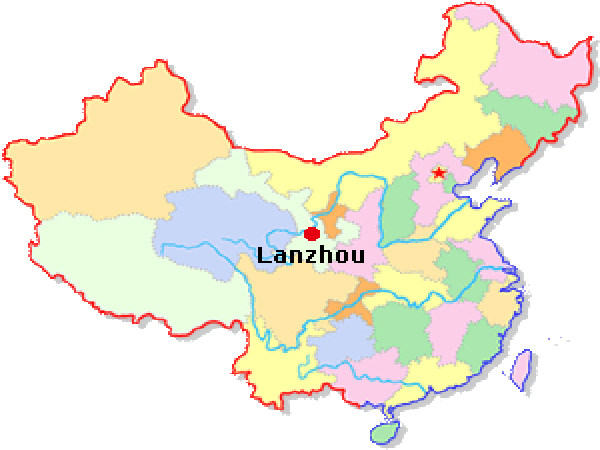 Lanzhou is a prefecture-level city and capital of Gansu province in northwestern China.

Lanzhou was badly damaged during the rising of the Gansu Muslims in 1864–1875. In the 1920s and 1930s it became a center of Soviet influence in northwestern China. During the Sino-Japanese War (1937–1945) Lanzhou, linked with Xi'an by highway in 1935, became the terminus of the 3,200 km (2,000 mile) Chinese-Soviet highway, used as a route for Soviet supplies destined for the Xi'an area. This highway remained the primary traffic route of northwestern China until the completion of the railway from Lanzhou to Urumqi, Xinjiang. During the war Lanzhou was heavily bombed by the Japanese.

The city is the seat of a currently vacant Roman Catholic diocese[3] and was previously the center of a vicariate apostolic.

Main industries include textile mills, rubber, fertilizer plants, oil refinery, petrochemical, machinery, and metallurgical industry. Gansu has one of the largest oil refineries in the country and Lanzhou itself is the center of the province's petrochemical industry. Lanzhou has a large refinery linked to the fields at Yumen by pipeline. It also manufactures equipment for the oil industry.

Lanzhou has a large textile industry, particularly noted for the production of woolens and leather goods. In addition, Lanzhou produces locomotives and rolling stock for the northwestern railways, as well as machine tools and mining equipment. Aluminum products, industrial chemicals, and fertilizers are produced on a large scale, and there is a large rubber industry. Copper is mined in nearby Gaolan.
Lanzhou has been one of the centers of China's national nuclear power industry since the 1960s.

Geography: Lanzhou is the China's northwest geographical center, more than 20 km of urbanization along the southern banks of the Yellow River. It is formed by three parts. They are valleys, basins, hilly land and Huangtumao ditch and gully area. The Yellow River is flowing through the whole city.

Administrative Division: The sub-provincial city of Lanzhou has direct jurisdiction over 5 districts and 3 county-level cities.

Climate: Lanzhou is situated in the temperate zone and enjoys a semi-arid climate with hot summers and cold and dry winters. Diurnal temperature ranges tend to be somewhat large due to the high elevation and aridity. The mean annual temperature is 10.6 °C, while annual rainfall is 315 millimeters, almost all of which falls from May to October. The winters are so dry that snow is extremely rare.