Kunming, the capital of Yunnan Province, is the political, economic and cultural center and also the transport and communication hub of the province. Kunming has no bitter cold in winter and heat in summer with blossoms opening all the year round. Hence it has enjoyed the reputation of the 'Spring City'. With a history more than 2,400 years, it owns its importance to the fact that is was the gateway to the well-known South Silk Road that facilitated trade with Tibet, Sichuan, Myanmar and India. 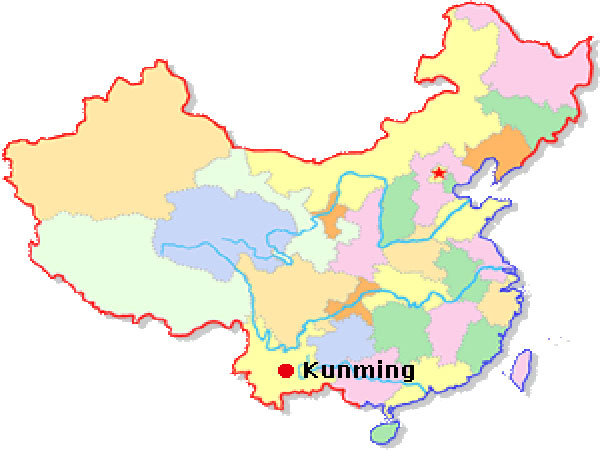 Kunming's alluring high land scenery, bewitching karsts landform, varied and exotic habitats and customs, places of historical interest can be found at major scenic spots in and around the city, such as Dianchi Lake, Stone Forest, Villages of Ethnic Culture, and Grand View Garden. Besides, the city is the place one can fully experience Yunnan's minority culture with 26 ethnic minorities like Yi, Bai, Miao, Dai and Naxi in the region, each of them has their own featured festivals.

Yunnan is an important passage between southwest China and Southeast Asia. it has developed advanced highway, railway, river, and air transportation systems. The Chengdu-Kunming Railway and the Guiyang-Kunming Electric Railway link Yunan to the national railway network. So far more than 50 regional, national and International flight routes have been opened. Kunming Wujiaba International Airport boasts an air transportation network connected to all major countries in Southwest Asia. An across-province highway network, with Kunming as the center and national and provincial highways as the framework, has been formed in the province. The highways linking its major cities are all high-ranked. Its main watercourses are the Jinsha River and the Lancang-Mekong River, and its key ports include the Jinghong Port, Simao Port, Dali Port, Shuifu Port and Suijiang Port.

Population: Kunming has a population of 3.89 million. Urban Population is 1.69 million, including 26 ethnic groups. The city is the place one can fully experiences Yunnan's minority culture with 26 ethnic minorities like Yi, Bai, Miao, Dai and Naxi in the region, each of them has their own featured festivals. 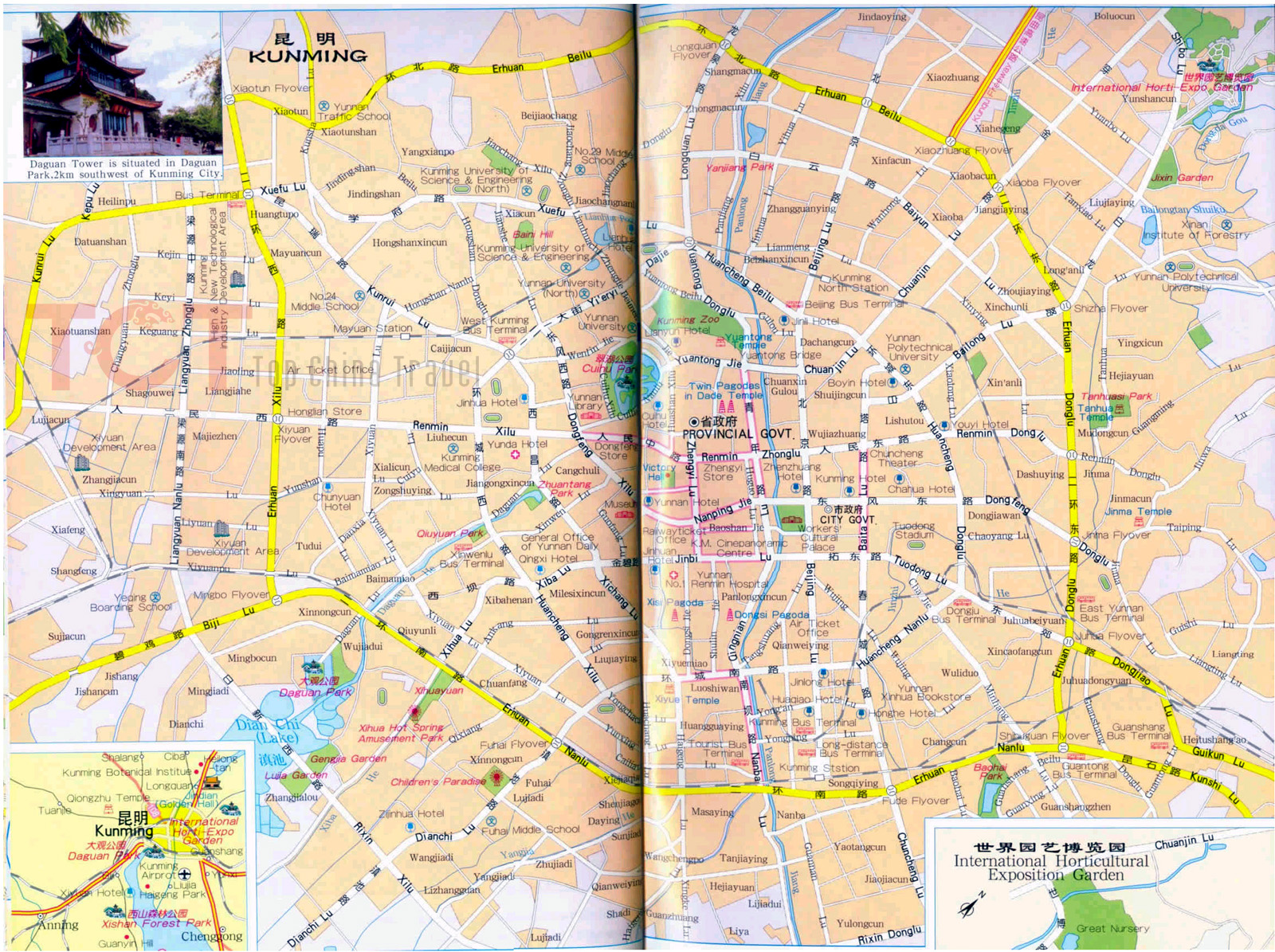 Located in the middle of the Yunnan-Guizhou Plateau, Kunming is located at an altitude of 1,900 m above sea level and at latitude just north of the Tropic of Cancer.

Kunming is close to Dianchi Lake in the south, surrounded on three sides by mountains and faces the Dianchi Lake plain. Kunming is the forefront and the portal that China facing Southeast Asia, South Asia and even the Middle East, of southern Europe and Africa. It has unique location advantage of connecting Guizhou-Guangxi to the coast in the east, passing through Sichuan and Chongqing into the central plains in the north, reaching Thailand and Cambodia via Vietnam and Laos in the south, and connecting Myanmar, India and Pakistan in the west.

Kunming has a long history, splendid culture, and it is one of the first batch of 24 national historical and cultural cities that the state council released which has more than 2200 years history of the city and 3000 years of civilization of Dianchi area. About 30000 years ago, there was human life in Dianchi lake area.
Tens of thousands of years ago the ancestors of Kunming had lived a life of savage that they ate the raw meat and drank the blood and they lived in the cave in this area with the primitive life. About four thousand to seven thousand years ago, there was settled agricultural nation in Dianchi Lake area, and they were engaged in primitive agriculture and hunting, raising livestock and poultry, and other activities, and has been able to spinning and weaving. Dianchi Lake area and rice planting have at least about one thousand years of history so far.
In Bronze Age clan tribal was formed in Dianchi Lake region, mainly Pu people. Di and Qiang people and other nomadic people came into Dianchi Lake area across the Jinsha River from Shaanxi, Gansu, Qinghai, Sichuan area, mixed together with local Pu people and formed Yunnan ethnic fusion, which promoted the exploration and development of Dianchi Lake area.

Located at an elevation of 1,890 m on the Yungui Plateau with low latitude and high elevation, Kunming has one of the mildest climates in China, characterized by short, cool dry winters with mild days and crisp nights, and long, warm and humid summers, but much cooler than the lowlands. The weather never gets very hot in summer; the temperature has exceeded 30°C (86°F) only on a handful of occasions. However, freak snowfalls occur in occasional winters. Controlled by a subtropical highland climate (Koppen classification Cwb), average highs are 15.4 °C (60 °F) in winter and 24 °C (75 °F) in summer. With its perpetual spring-like weather which provides the ideal climate for plants and flowers, Kunming is known as the "City of Eternal Spring". The city is covered with blossoms and lush vegetation all the year round.[8] The period from May to October is the rainy season and the rest of the year is dry. The city has a mean annual rainfall of 1,010 mm (40 in), with an annual sunshine period of 2,250 hours and an annual frost-free period of 230 days.

• Best Time to Visit
♦ Spring (March to May): Spring is warm, dry and rainless, and the temperature change is big. Early spring in March people can see snow mountain. At the start of spring, flowers are everywhere in Kunming that the peach trees are in bloom and the willows are turning green, and you can go to Yuantong Hill to see cherry blossom. This period of time in Kunming, there are many fruit, flowers and ethnic festivals, the scenery of Kunming is the most beautiful during this time.
♦ Summer (June to August): Summer is not scorching heat, but concentrated rainfall, and the heavy rain. The rain in summer accounts for more than 60% of annual rainfall. May to October is Kunming's rainy season, basically there is shower every day. Kunming city annual average temperature of about 15 ℃, the hottest month average temperature basic between 19 ℃ to 22 ℃.
♦ Autumn (September to October): Autumn is cool, and the sky is high and the weather fine. The weather dry and autumn cool quickly, so people must prepare a sweater or coat if travel there. As long as it rains, the temperature will be slightly down, tourists would better take a trench coat.
♦ Winter (November to next February): Winter is not extremely cold with adequate sunshine. Bevies of black-headed gulls fly from distant Siberian Lake Baikal to avoid the cold weather and fall perch of Panlong River, Chestwood, Dianchi Lake in Kunming city. So in winter people can come to watch those elves.
• Dressing Tips

♦ Spring (March to May):Kunming day and night temperature difference is big, there are saying that “four seasons in one day”. In spring and summer people can bring a thin unlined upper garment. The weather in Kunming is a bit dry. Suggested that drinking more water and eating more fruit and vegetables.
♦ Summer (June -August): Kunming ultraviolet ray is very strong, the weather is changeable, umbrella and sun hat can use all the year round in Kunming, and girls don't forget to bring sunscreen.
♦ Autumn (September to October): From May to October is the rainy season in Kunming, if it rains the temperature will be lower, so tourists have better to take a windcoat and light sweater.
♦ Winter (November to February): The average temperature in Kunming in the coldest month will be 6 degree to 8 degree. People who are easily getting cold would better bring down jacket. “Take enough clothes of different seasons and prepare solid food" would be useful travel advise according to the special climate of Kunming.

Tourism
Kunming is a hot spot in the national top ten tourist cities, the first excellent tourism city in China. By 2012, the city has more than 200 government protection of cultural relics, like the Stone Forest world geological park, Dianchi Lake, Anning Hot Spring, Jiuxiang, Yangzonghai, and other national and provincial famous scenic spots, and the World Horticultural Expo Park and Yunnan Ethnic Village more than 100 key scenic spots, such as more than 10 national tourist routes.
• Best Places to Visit
♦ Stone Forest –Stone Forest Scenic Spot, is located in Lunan county, 86 kilometers away from Kunming city. The scenic area is make up by the large and small stone forest which are the ancient stone forest, Dadie Water, Long Lake, Moon Lake, Zhiyun Cave, Qifeng Cave of seven scenic areas. The county has a total of stone forest area of 400 square kilometers, is a high-profile scenic spot both at home and abroad of karst landscape as the main body, is praised as "the world wonders". 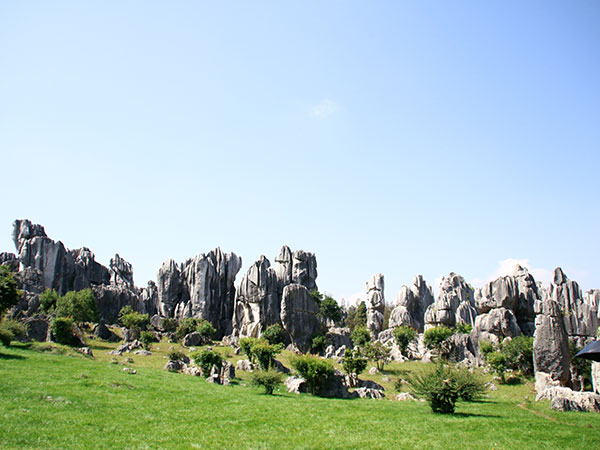 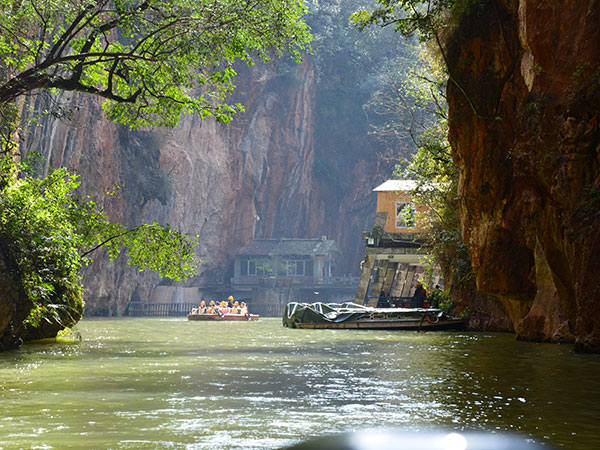 ♦ Western Hill –Western Hill is a National Forest Park, national AAAA level scenic spot and one of the core scenic areas in National Dianchi Lake Tourist Resort. It is located in the 15 km of western suburbs of Kunming city and is composed of Huating Mountain, Taihua Mountain, Luohan Mountain etc. The mountain is stretching over 40 kilometers, the altitude of 1900 ~ 2350m. According to ancient legend there was a phoenix stopped for a rest in the Western Hill, the people who saw it but did not know it so just called it green chicken, so it also called the Green Peacock Mountain. And because seen from afar, its undulating skyline resembles a graceful young lady sleeping on her back, hence the name of the "sleeping beauty". 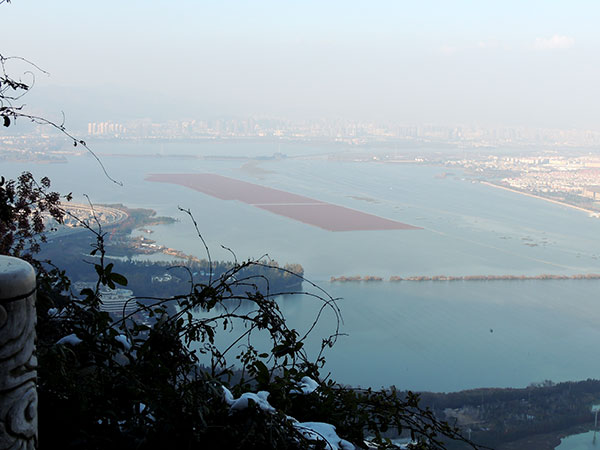 ♦ Dianchi Lake –Dianchi Lake is located in the south of Kunming city at the foot of the Western Hills. Its northern end is near Kunming Daguan Park, and its south reaches Jinning County, 5km away from the urban area. Here has been summer resort and tourist resort all the time. The shape of Dianchi is crescent, from north and south it is 39km long, 13.5km wide, the average width of about 8km. The shoreline is about 200 km. The lake covers an area of 300 square meters, ranking the first in Yunnan Province, and the maximum depth of the lake is 8m, average depth of 5m, water storage capacity of 1.57 billion. It is the sixth largest inland freshwater lake in China. 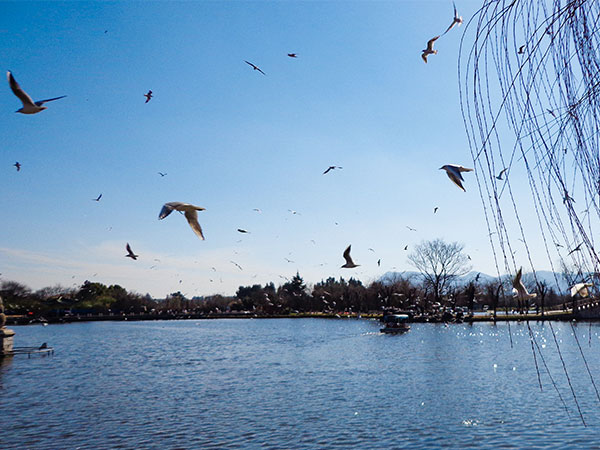 Custom
Kunming is a multi-ethnic city, there occupies 26 indigenous nationalities, forming inhabited villages or village street mixed Han, Yi, Hui, Bai, Miao, Hani, Zhuang, Dai, Lisu and other nationalities. In the long-term production and life, every ethnic group not only influences each other and they are thoroughly acquainted with each other and maintain their own national tradition, continue their unique lifestyle, folk custom and culture and art. Kunming ethnic compatriots are hospitality with simple folkway, whether it is the interpersonal etiquette, unique diet flavor, colorful costumes, or different styles of architecture can make people feel the distinctive national characteristics.
In many ethnic festivals, Yi minority "Torch Festival", Bai minority “March Fair” and “Raosanling”, Dai minority “Water-Sprinkling Festival”, Miao minority “Huashan Festival”, Lisu minority “Knifeladder-Climbing Festival” and so on that has long enjoyed a good reputation, rich and colorful. Every festival, the masses of all ethnic groups will put on their own handmade embroidery dyed system of national costumes, gathers from all directions to hold activities like wrestling, bull fighting, antiphonal singing, and other event.
There is a wide range of local arts in Kunming, like Yunnan opera, Huadeng opera (Lantern opera), folk ditties, minority operas, folk narrative poems and folk legends, after hundreds of years of development and widely spread, they are popular among the broad masses of the people.
Shopping
Due to the unique geographical environment of the plateau, and it is the capital of Yunnan where is a center city of all ethnic groups to inhabit, Kunming is a rendezvous for plateau items and national features. It is well-known that Yunnan ethnic groups are good at hand-making that it is a good choice to buy colorful and elegant hand-made items like Dai brocade, Wooden Carving in Kunming. And jade in Kunming is easy to buy because Kunming adjacent to the jade producer Burma, and Kunming itself also has the rich resources of jade.
Transportation