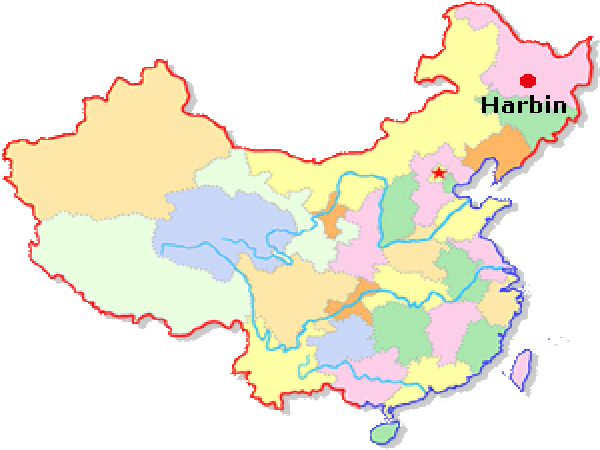 Harbin, capital of Heilongjiang, China's northernmost province, is a place of many contradictions. Travelers are faced with frequently cold and inhospitable climates, but comforted by a warm and friendly population, increasing huge and stark skyscrapers, but also winding streets of quaint, colonial architecture, and impressive Siberian Tiger conservation policies that are somewhat offset by hunting grounds where a variety of animals are killed for pleasure. These contradictory scenes continue back in time, so that the history of Harbin is one of turbulence and economic prosperity.
Nowadays this old Chinese outpost is a place not overly visited by travelers, despite the popular Ice Lantern Festival and the many other good reasons to visit. Anyone interested in history, Russian or Japanese architecture, skiing, tigers, or traveling on the Trans-Siberian Railway could do a lot worse than Harbin.

Harbin city first came into being with the settlement, in 1097, of the Nazhen nationality. The place then was a natural, and cold, fishing area, situated right on the Songhua River. By the Yuan Dynasty (1271-1368AD) the area was renamed Harbin, literally meaning "where the fishing nets are dried".

It was later in the nineteenth century, however, that the city really began to thrive, and when the Russian influence, that was to remain and heavily dominate Harbin's history, began to take a hold. The Russian Tsar and Qing court agreed, in 1896, to the signing of a contract that granted the latter the right to build a railway from Dalian, through Harbin, to Vladivostok. By 1898, the city had become a Russian concession, with its own powerful Tsarist police force, as the Tsar continued to enforce his colonial plans for Manchuria, plans that were strengthened by the completion of the rail link in 1904. The Tsar was finally thwarted by the Russo-Japanese War (1904-05) that ended with a shock victory for the belligerent and rapidly militarized Japan. The Japanese took over the railway. The city then swung between these two nations, the Russians returning in force to the city in 1917, mostly White Russians fleeing the newly established Bolshevik state, the Japanese taking control in 1932 as a part of their Manchukuo invasion, and the Soviets retaking the city in 1945 and remaining dominant here for almost ten years.

It was not until after the Cultural Revolution (when factional fighting made it almost impossible for anything to get done) that the city returned to its forte of rapid economic growth.
The city now commemorates both historical trauma, some of the darkest pages of China's history are represented including Japanese atrocities at the Japanese Germ Warfare Experimental Base Museum and the many serious floods at the Flood Control Monument, as well as historical triumph, including the great Russian architecture in the northern Daoli District. For those a little daunted or unimpressed by these, there is skiing, hunting, leisure resorts on Sun Island Park and a Siberian Tiger Park for pleasure.
Area Code: 0451
Zip Code: 150000
Area: About 53,800 km²
Geography: Harbin is located in southern Heilongjiang, on the southeastern edge of the Songnen Plain. The city centre also sits on the southern bank of the middle Songhua River. As the prefecture is rather large, its latitude ranges from 44°04′-46°40′, the longitude 125°42′-130°10. Neighbouring prefectures are Yichun to the north, Jiamusi and Qitaihe to the northeast, Mudanjiang to the southeast, Daqing to the west，and Suihua to the northwest. In the southwest is Jilin Province. The terrain of the city is generally flat, with an average elevation of around 150 meters.
Population: The population of Harbin is 9,353,200 (2010).
Administrative Division: The sub-provincial city of Harbin has direct jurisdiction over 8 districts, 3 county-level cities and 7 Counties. On August 15, 2006, Dongli District merged with Xiangfang District.

Climate: Harbin features a humid continental climate with hot, humid summers and very cold winters. Harbin's nickname of the "Ice City" is well-earned. Its winters are brutally cold and at times windy, as the average monthly high in January only reaches −12.3 °C (10 °F). However, the city is dry and sunny during winter. Both spring and especially fall constitute short transition seasons. Summer is very warm, with an average monthly high temperature in July soaring to 28.0 °C (82 °F). The annual precipitation, at 524 mm (20.6 in), is heavily concentrated from May to September, as evidenced by July's total of 142.7 mm (5.62 in).