How to get to Shenzhen from Guangzhou

Guangzhou and Shenzhen are two large and popular cities in the south of China. They are both famous for it business and commercial trade. And they are two well-known tourist cities too. There are numerous visitors traveling between these two cities. For those who are the first time traveling to China, they might be confused about How to get to Shenzhen from Guangzhou. This article will introduce some transportation ways between Guangzhou and Shenzhen for your reference. Visitors can take high-speed train or bus to get to Shenzhen from Guangzhou.

There are more than 220 high-speed trains running between Guangzhou and Shenzhen every day. The train between Guangzhou and Shenzhen run as often as every 10mins during peak times. With cutting edge, the bullet trains have a handful of stops between the two cities. And the journey takes only 36 minutes. And it runs from around 6:00 am until 11:18 pm every day. The ticket fare ranges from 75 to 200 yuan depending on what standard seat you book. It is great that the trains should be as frequent as buses. A number of these trains will also run further southwards and terminate in Hong Kong. But if passengers want to go to Hong Kong, you should first get the visa of Hong Kong.

Due to the frequency of the Bullet Trains between Guangzhou and Shenzhen, there is not a great demand for bus travel. But the bus travel do exist are often direct routes between certain neighborhoods. What the bus does offer is cheaper fares than taking the bullet trains. And the travel time of a single journey is 2 plus hours. It can be a good way to see a bit of the local countryside if you take the bus, although most of the journey involves being whisked up the freeway. There are a lot of bus stations in two cities, you can just ask the taxi driver to drive you there. And then you can enjoy your journek.

►What are the trains like?
The actual trains themselves are some of the best in China. The trains between the two cities are modern, fast and clean, you’ll find open plan carriages, air conditioning and comfortable seats. Air conditioning is set up with regular standard. In addition, there is usually a small snack trolley that is wheeled around, in case those passengers are boring or hungry and they can buy some to eat.

►Where can I buy train tickets?
The train tickets can be bought at the railway stations prior to departure of the train, either from the ticket booths or the automatic ticket machines. Furthermore, you can also buy the tickets on the internet, but just keep it in mind that after booking the ticket online, you should go to the ticket booths or the automatic ticket machines in the station to get the paper train ticket as soon as possible. If it exceed the stated time, the ticket will be canceled. Passengers who use the second-generation ID card to book a G-headed high-speed rail ticket online can get on the train directly with their ID card without getting a paper ticket.

Given the frequency of the service, there is no need to purchase tickets in advance although be aware that there can be long queues for the tickets at rush hour; 7-9am and 3-7pm.

►Is train travel safe in China?
Train travel in China is absolutely safe. Trains are as modern and well maintained as in the US and Europe. So you do not need to worry about this problem while taking a train in China.

How to Get to Guangzhou from Hong Kong 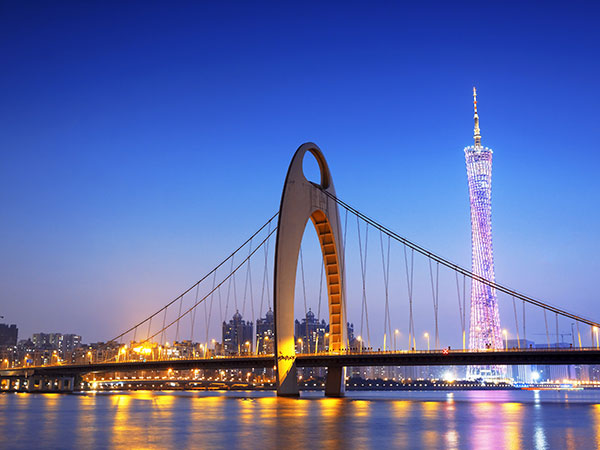