Guangzhou South Railway Station, also known as the New Guangzhou Station and formerly known as Shibi Station, is located in Shibi Town, Panyu District, Guangzhou. It is a large modern railway passenger station, 17 km away from downtown Guangzhou. The construction of the station started in December 30, 2004, and in January 30, 2010 (ie, before the spring of 2010) it was put into use. It is a interchange station and a terminus of Beijing-Hong Kong high-speed railway, the Guangzhou high-speed railway, South Canton High Speed Rail, Guangzhou-Zhuhai Rail, Guangzhou-Foshan-Zhaoqing Intercity Rail, and is also currently the originating station of Wuhan-Guangzhou passenger line and Guangzhou-Shenzhen-Hong Kong Passenger Line. It already links to Guangzhou Metro Line 2 and will link to Line 7 in the future. It is one of the four largest railway passenger transportation hubs in Guangzhou. 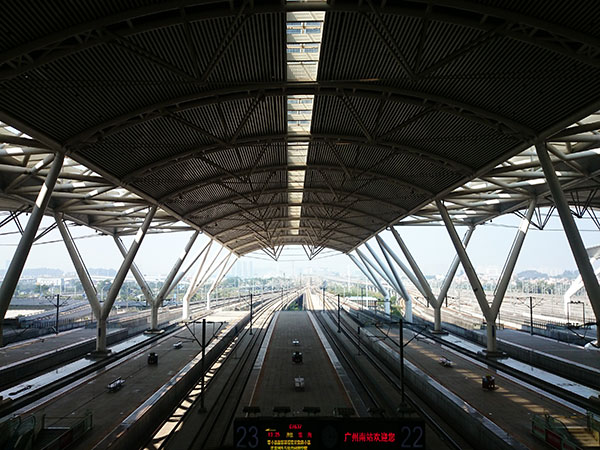 There are five layers in the station, including two layers underground and three layers above the ground. The third floor above the ground is the elevated waiting room, which is used for the waiting room of Wuhan-Guangzhou Railway and Guangzhou-Shenzhen Railway and the transfer layer for inter-city trains. The second floor is the Port Hal and platforms. It is set with VIP waiting room and Port Hall. The first floor has entries for going in and out of the station. It is used for the in and out of the high-speed trains, intercity trains, as well as taxies. The two floors underground are used as public garage. They are also used for the in and out the subways.