Can you see the Great Wall of China from Space?

Don't know when to rise; “The Great Wall of China is the only man-made structure visible from space” has been widespread all over the world. Is the Great Wall visible from space?
The first spaceman of China, Yang Liwei, received an interview after he came back from the space. A journalist asked him curiously, “Do you see the Great Wall from the Space?” Yang Liwei answered quickly “No!”
Theoretically speaking, it is impossible to see the Great Wall of China from the space. Because the Great wall is narrow and irregular, and it is hard to observe something irregular from the space. In addition, the average width of the great wall in less than 10m which make the Great Wall easily merging with the environment, so that the Great Wall actually can hardly be distinguished from the environment when it is been seen from the height of 20 km and it will be totally invisible for human eyes from the height of 60m. To see the Great Wall from the Moon is the same as to find a hair from a distance of 2688m, and this is obviously unreal.
Actually, many spacemen said that the widespread rumor about the Great Wall was not true. Edwin Aldine, one of the first two spacemen who arrived at the Moon, said that the rumor was a misunderstanding in an interview. And the first space visitor Tito also denied this view.
The picture below is a bird view of a section of the great wall. The right-up corner where it is highlightened is a section of great wall that can be spotted at good weather conditions. 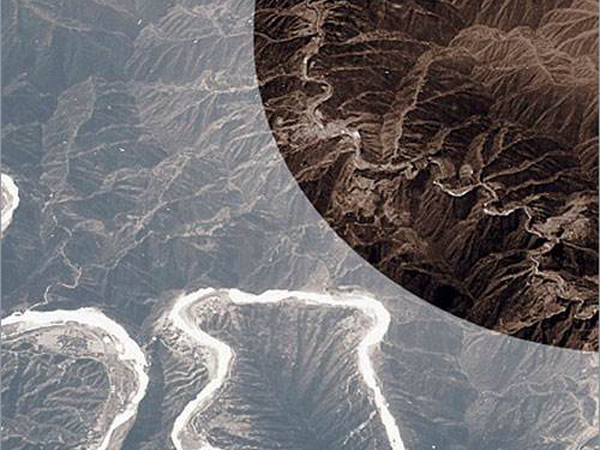 Below are some more similarly interesting facts about the Great Wall:

1. It is not exactly ‘one’ great wall. As in: ‘The Great Wall of China’.The Great Wall is not a single Wall but is made up of many different fortification constructions.
2. It is not visible from space, contrary to popular belief, as it is much too narrow to be identified.
3. It remains a spectacular architectural and historical phenomenon.
4. The Great Wall's military importance, and its symbolic power, have varied widely in its long existence, as its place in Chinese life has shifted with the country's history.
5. It was initially constructed at the command of the first Emperor, from 221 BC, and was a combination of the various protective walls that had been built by the smaller states which he had conquered and merged to form China.
6. The original Wall was made of pounded earth, and in places the wind-carved remains of this two thousand year old construction are still visible.
7. The Wall which is familiar to us today is the work of the Ming Dynasty, and its vast programme of reinforcement - prompted by a renewed threat from the Mongols in the north.
8. In the 17th century, amazed Jesuits sent back reports to Europe about the Wall, and ever since it has held a powerful place in the imagination of the West.
9. Some scholars argue that this in turn has shaped the modern Chinese appreciation of their astounding inheritance.