How to Get to the City Center from Dalian Zhoushuizi Airport 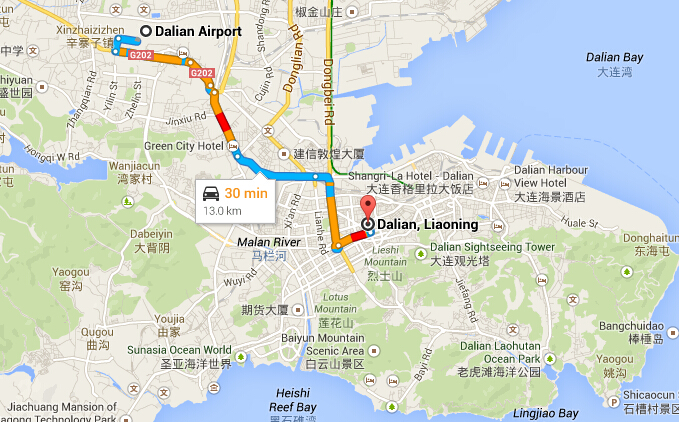 Dalian Zhoushuizi International Airport (IATA: DLC, ICAO: ZYTL) is the major airport serving the city of Dalian in Liaoning Province, China. It is located in Ganjingzi District in Dalian City, about 10 km northwest of the city center. The airport is the hub for Dalian Airlines and a focus city for China Southern Airlines and Hainan Airlines.

The transport from Zhoushuizi Airport to Dalian downtown is very convenient. For it is not far away from the city center, passengers can get to the downtown area from the airport easily by metro, bus or taxi after they get off the flight.

The best way to get to Dalian downtown is to take the metro. There is only one metro line links Dalian airport to city center at present and it was just opened to public service in May, 2015. You can take the metro line No.2 at the airport station(机场站) and get off at Zhongshan Square station(中山广场站). Please note that the first metro departs at 5:55 am and the last on departs at 10:05 pm. The metro journey will take 32 minutes and cost 4 RMB.

There are 4 buses for passengers to get to the different site around the Dalian downtown.

The airport shuttle bus runs from the airport to Renmin Road. It costs 10 RMB for one way. The earliest bus sets off at 7:45 am. You will be dropped off at Renmin Road(人民路).

Taking taxi is more flexible than other ways for it can take you anywhere you want. Taxis can easily be found in front of arrival hall. The flat rate fare of most taxis in Dalian is about CNY8 for the first 3 kilometers (about 1.9 miles) and then the distance surcharge is about CNY 2 per kilometers. It usually costs passengers at least CNY 30 from the airport to downtown area in the day time, but 30% more at night.