Sacred Mountain in Tibet has listed the 5 of the Holy Mountain in Tibet, this religious land. People of the land believes that every creature have their own spirit and mind, and worship grand mountains and lakes for their tremendous momentum and untouchable magic power.

Himalaya Mountains, or Himalayas for short, is the highest mountain range in the world, with its main body lies between China and Nepal, running west to east. It is home to the world's highest peaks, including the mighty Mt. Everest, K2 and Nancha Barwa.

Himalaya is actually a Sanskirt name means "Snow Land" as the whole range is covered by snow all year round. Qomolangma is her Tibetan name which means the 3rd Goddess.

There are about 15,000 glaciers encompassed the Himalaya range, including some famous glaciers that namely the Gangotri and Yamunotri (Uttarakhand), Nubra, Biafo and Baltoro (Karakoram region), Zemu (Sikkim) and Khumbu glaciers (Mount Everest region). All of they stores about 12,000 km3 of freshwater.


Mount Bonri
Mount Bonri is one of the great Sacred Mountains of Bon Religion which located to the southeast part of Nyingchi, the north bank of grand Brahmaputra River. Local people believes that, it was the very place where Aqiongjiebo the devout disciple of Bon, fought against the Master of Buddhism , Padmasambhava. Aqingjiebo, therefore, became the hero of Bon Religion.

Nowadays, people living nearby still believe that everything in Mount Bonri have their own spirit, they worship the stone, bird and the giant tree standing on the upper level of the mountain. 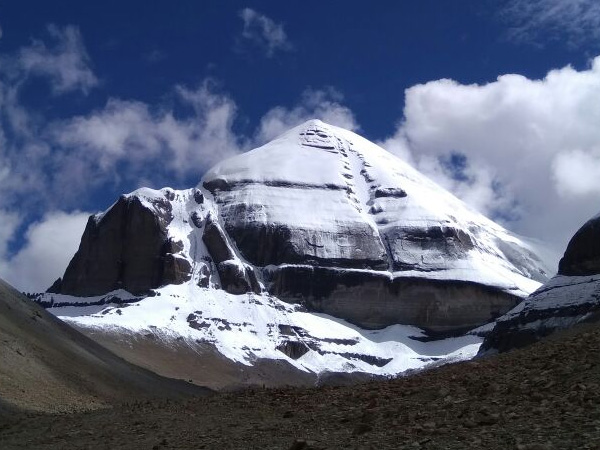 Mount Kailash, or Gangs Rinpoche in Tibetan language, is one of the 5 Sacred Mountains in Tibet, which means "precious jewel of snows".

With an altitude over 6,600m. it is the highest peakof the grand Gangdisê Mountains, which are part of the Transhimalaya in Tibet. It has a pyramid-like peak that piercing straight to the sky.

Every year, hundreds of thousands pilgrims from local and areas/countries nearby would come here for worship, which is a tradition that handed down for thousands of years. Pilgrims of different beliefs believe that circumambulating the Mt. Kailash is the right way to worship the god of the mountain and pray for good fortune and happyness. It would be a 52km long journey. In another word, the devout pilgrims may have to walk 15 hours at least to finish a circumambulation.


Mount Gongburi
Mount Gongbuti is a sacred mountain in Tibet, with a height of over 4,000 meters above sea level. It is said that, the mountain is the birth place of ancient Tibetan People.

Located to the east part of Shanna area, Mount Gongbuti has three main peaks, the Yangga Wuzi, Senben Wuzi and the highest one - Zhukang Zi. There is a story about the Monkey god and his wife Rasetsu female who lived together in this place.

As the legend said, long long ago, the sacred monkey came here to cultivate his mind. He and the Rasetsu female met each other in this mountain and soon got married and have their own lovely children. Therefore, people said that it is the very place gave birth to the ancient Tibetan People.


Mount Haburi
Mount Haburi, also known as Haiburi Mountain, is located to the east side of Samye Monastery, Shannan, is one of the 4 Sacred Mountains in Tibet. It is said that, this mountain was the rite of Master Padmasambhava long time ago, who tried to exorcist the demons that gathered in the newly built Samye Monastery.