How to Get to Guilin from Chongqing 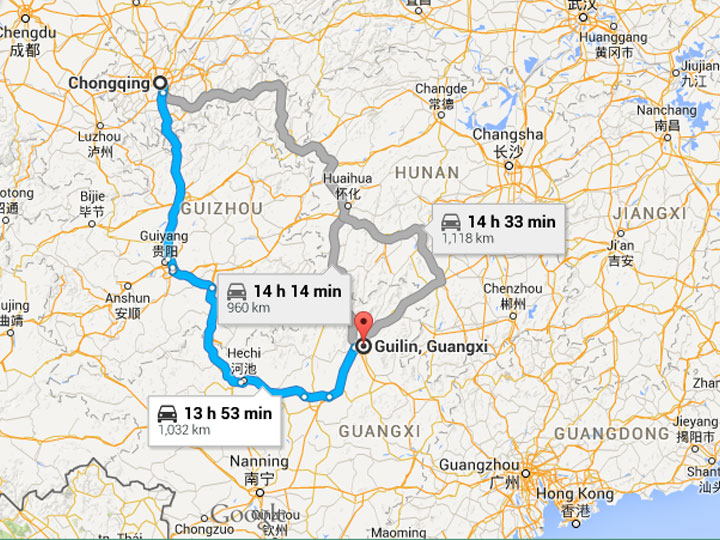 Where is Chongqing and Guilin

Chongqing is located in the southwest of China, close to Guiyang and Chengdu. It is one of the biggest cities in the southwest, and as a tourist city, it is reputed as a mountain city and its cuisine enjoys a fame in China.

Guilin is located in the northeast of Guangxi province, and in the south of China. It is close to Guangzhou, Changsha, and Guiyang. Builting a name as an international tourism city, it is featured with its karst landscape, clean rivers and green mountains.

How to Get to Guilin from Chongqing

Chongqing and Guilin are famous tourist’s destinations in China, and it is about 840 kilometers between this two cities, which is lengthened due to the mountainous landform. Between this two cities lies Guizhou province, If you like, you may go to Guiyang first and then to Guilin. The following are two options about transporting to Guilin from Chongqing. Option 1 is more fast than option 2, but it is higher in price.

Chongqing has one airport, Chongqing Jiangbei International Airport(重庆江北国际机场), and Guilin also has one, Guilin Liangjiang International Airport(桂林两江国际机场). Normally,  non-stop flights from Chongqing to Guilin are available, which takes about 1.5 hours  and there are also several connecting flights. The schedule of those flights may be changed according to season.

Guilin Liangjiang International Airport is located in Liangjiang, Lingui district, about 28 kilometers away from city downtown.   After you get out of Guilin airport, you could take an airport express bus to city downtown. There are several lines from the airport to the downtown:  to Civil Aviation Hotel, to Guilinbei Railway Station, to Wanfu Square.  Second you could take a taxi or charter a car.